Hatch covers of ships are designed to be efficient and cost-effective, as an initial investment and during service, and at the same time should suit the demands of the various types of cargo vessels.

The major objective of hatch covers and coamings on ships is to prevent the ingress of water into the cargo hold and protect the goods from being damped and damaged.

Lifting type or lift away type hatch covers are generally used on container ships, whereas rolling type is used on bulk carriers (to be specific side-rolling). Rolling type can be divided into end rolling, side rolling, and piggyback & telescopic.

Folding type hatch covers are basically used on general cargo ships. However, these may vary depending on the stowage space and the type of cargo that is carried. 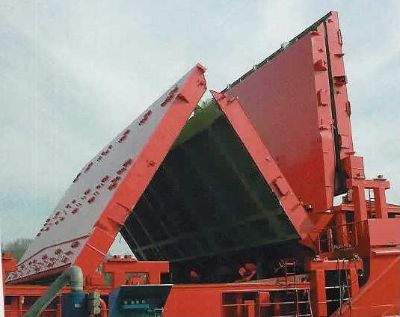 Rolling type hatch covers consists of two covers at the end of the hatchway. Wheels are fitted which help in the sliding of the panel either athwartship in case of side rolling or longitudinally in case of end rolling.

These type of hatch covers are usually fitted on large ships. Hydraulic rams are required to raise them to rolling position as they are extremely heavy and have very large dimensions.

Lift away type hatch covers can be classified into two types – 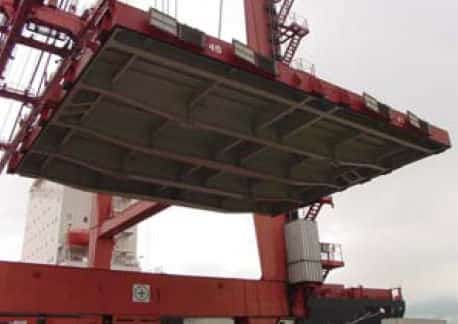 Single panel cover consists of a single cover for each opening, these can be seen mainly on bulk carriers. In case of multi-panel covers, a single hold is covered via multiple numbers of covers, these are most commonly observed in cellular container ships in the case of longitudinal joints, and for multipurpose cargo ship in case of transverse joints.

These type of facility are used on ships having relatively smaller hatch cover. It consists of a hydraulically powered lifting crane facility whose purpose is to lift the covers longitudinally and stack it together at one end or over any empty stowage tank. It is relatively cheap and is used mostly in barges. 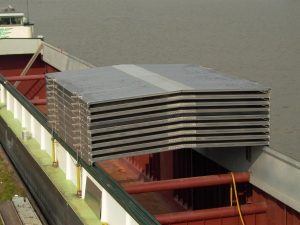 Designing a hatch cover does not mean just designing the cover and its coaming, there are various key components which ensure that the hatch cover stays intact and effective for a very long period. The key parts are as follows –

It should be ensured that the maintenance of the above-mentioned components is done on a regular basis in order to ensure the safety of the cargo and the effectiveness of the hatch cover & coamings.

General considerations while designing the various components of the hatch cover are as follows:

Concept of hatchless container ships can be considered as a revolutionary change in the field of cargo ship design. This can be understood well if we look into the disadvantages of having hatch covered container ship.

However, this type of concept has got various disadvantages as well. First of all, it cannot prevent the flow of green water into the holds which leads to internal structural damage.

Second, when empty it is subjected to torsion and hence these ships have relatively large torsion boxes. Third, water entering the holds need to be removed via a proper drainage system or else it may cause a free surface effect.

Hogging and sagging of the vessel can also be reduced by providing gaskets at the corners of the hatch whose rubber can absorb the relative movement of the compression bars. Transverse deformation can also be reduced using gaskets. However, in order to reduce torsional deformation, resilient cleats should be fitted at the ends of the hatch covers, thus reducing the relative movement between the panels.

It is to note that a variety of factors are taken into consideration while choosing the type and design of hatch cover for a particular ship.

What according to you are the main points that should be considered while planning hatch covers for a particular ship?

Top 10 Shipbuilding Companies in the World in 2012

Stopping a Ship: Why Ships Cannot Have Brakes?

What’s The Importance Of Bulbous Bow Of Ships?