You are here: Home › Marine Navigation › Marine Radars and Their Use in the Shipping Industry
TwitterFacebookLinkedInPinterestBuffer

The marine radar is an equipment that is perhaps used the most on the ship’s bridge by the OOW in carrying out a safe navigational watch.

What is Marine Radar?

A mandatory aid to navigation, the radar is used in identifying, tracking (with integrated ARPA) and positioning of vessels (including one’s own vessel) among other things in order to adhere to the COLREGs so as to safely navigate a ship from one point to another.

The marine radar is classified under the x-band (10 GHz) or S-band (3GHz) frequencies. The x-band, being of higher frequency is used for a sharper image and better resolution whereas the S-band is used especially when in rain or fog as well as for identification and tracking.

Tracking ship devices are compulsory as per COLREGS (International Regulations for Preventing Collisions at Sea).

SOLAS Chapter 5, Regulation 19 states that “All ships of 3000 gross tonnages and upwards shall, in addition to meeting the requirements of paragraph 2.5, have a 3 GHz radar or where considered appropriate by the Administration a second 9 GHz radar, or other means to determine and display the range and bearing of other surface craft, obstructions, buoys, shorelines and navigational marks to assist in navigation and in collision avoidance, which are functionally independent of those referred to in paragraph.”

The entire SOLAS Chapter 5, Regulation 19 can be read here.

With the help of ship radar, accidents can be prevented at sea with the use of the various inherent functionalities of the radar (determining the CPA and the TCPA, EBL, VRM etc).

However, even while the ships are docked in the port, with the help of these radars, the coast guard, VTS and the other authorities can use them to monitor the traffic in the small radar range.

The ship radar has a screen (referred to as the Plan Position Indicator) that displays all the targets that are present within the radar range. Since all the objects are clearly visible on the screen, navigating and monitoring the position of the ship becomes really feasible, hence the term ‘aid to navigation’.

Main Features of the Marine Radars

The main features of the marine radars can be explained as follows:

How Does Marine Radar Works

The term “Radar” is an acronym for Radio Detection and Ranging”. The marine radar works on the basic principle of electromagnetic waves. The radar antenna sends the high-speed electromagnetic waves to establish the location, which is the distance, the velocity and the direction the wave travelled along with the altitude of the object, moving or stationary.

Electromagnetic energy travels through air at a high constant speed, equivalent to the speed of light (300,000 kilometres per second).

Let us understand how does the marine radar works:

If there is an object, which will reflect the wave back to the radar, the computer set up of the radar will determine the distance between the ship and the object along with its location. Hence, it can be said that the radar basically reads two things – The position of the object and the direction of the same.

Position of the object: The radar antenna is continuously rotating on top of the ship sending and receiving signals. Hence, the radar is sweeping the signals all around the ship. As the radar pulse waves are reflected by an object, it will travel in the same direction and will be received by the radar detecting the position of the object. When the pulses are received back, the computer screen will log the position. 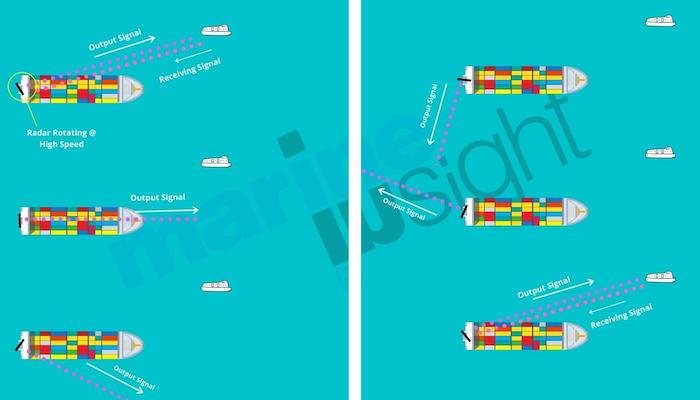 Distance from the ship: As the radar antenna is constantly sending and receiving signals from the object on the way of the electromagnetic signal, the received signal is sent back to the computer unit, which calculates the time taken for the signal to reflect back to the radar. Once the computer knows the time, it will calculate the distance by using the speed and time formula. 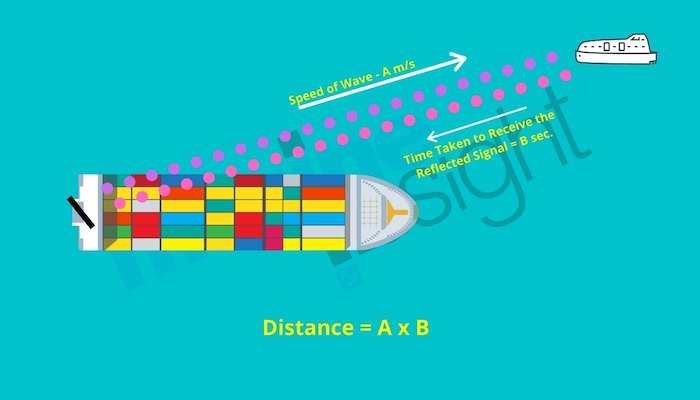 The basic components of marine radar are shown in the below diagram: 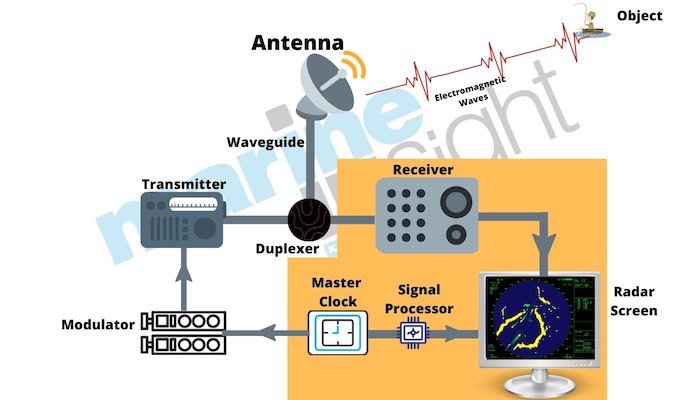 Related Reading: 15 Things to Consider While Using Radars On Ships

The marine radar is a much bigger subject than is laid out in the article which only skims the surface of the operation and the uses of the radar.

As an OOW, it is important to be thorough with the radar and study its operation and features extensively along with the limitations of the radar.

A good book to start with is Shipborne Radar and ARPA by Capt. H. Subramaniam.

The most important point about marine radars is that the screens used to view the position of the objects are either LED screens or monochrome screens.

With such perfect screens, the clarity of the objects is highlighted even further. Also since these screens are waterproof there is no threat of interruption to the ship radar system in times of rough weather.

The tracking ship system has further been developed to include even boats. This means that even boat owners can be assured of their vessel’s safety while on the water.

Radar has been a major instrument to help marine navigation since the past six decades. Over the years, radar technology has developed to include not just aircraft but ships as well.

Marine travel and safety thus have become very feasible. It can be hoped, that in the future more such tracking devices will be developed so that several marine accidents and casualties can be prevented.