When working with a ship’s Main Engine, which is equipped with Variable Injection Timing (VIT) device, a marine engineer must know the following points for smooth engine operation:

1. Freeness of Mechanical Parts: The actuator of Variable Injection Timing (VIT) operates on the movement of eccentric shaft of suction and spill control valves. Marine engineers must ensure that these valves are free from any obstruction or excessive play. The eccentric shaft spring should also be regularly checked for proper operation in order to avoid any kind of breakdown.

2. Checking Load Indicator Values: The regulating fuel linkage transmits the movement of the governor output lever and determines the fuel feed to the cylinder accordingly. Ship’s engineer’s must check the correspondence between the load indicator position in the setting plate provided in the linkage, and the load indicator value at the local manoeuvring stand and at the remote control position when the VIT is set to “0”. If there is deviation in any of the three values, it has to be corrected before commencing any action on the fuel pump timing.

3. VIT Actuator Setting: Check the actuator stroke when VIT is “0” by inserting the distance sleeve between the suction valve regulating lever and the blocking unit. Move the VIT to its maximum advance and minimum retard position respectively and note down the values in the load indicator in the setting plate. Also check the stroke of the actuator at the remote control system. Lastly, note and compare any deviation prescribed in the manufacturer manual.

5. Electrical Connection: For electronically operated Variable Injection Timing (VIT), all the cable connections between the connecting box and VIT terminal must be checked regularly.

6. Pneumatic Cylinder: The Pneumatic cylinder which acts as the positioning unit of the VIT linkage is sometimes provided with a mechanical stoppage which should be checked for jamming. This will be useful to move the cylinder manually in the event of failure of automatic positioning system. 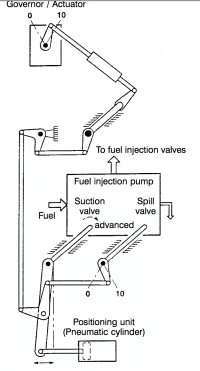 7. Running in Period: When the marine diesel engine is under breaking in/ running in period due to rent overhauling of the engine components, VIT should be disconnected or turned off for the complete time period until the running in is completed.

8. Engine running with Unit Cut Off: If the main engine is running with one unit cut-off due to major problem in the parts of that unit, the VIT to be set at zero or switched off as there will be uneven load distribution within the engine.

9. VIT Failure: When the failure of VIT occurs, the combustion peak pressure is no more controlled by the pneumatic actuator. During such situation, the distance sleeve must be installed to fix the neutral position of the VIT.

This is not an exhaustive list but comprises of all the important points that must be considered while working on an engine with VIT.

VIT is used to reduce the overall fuel consumption and to achieve maximum pressure even at low load but poor maintenance and operation of VIT can reverse the result and even lead to major damage of main engine parts.

Do you know any other important point that should be added to the list? Let’s know in the comments below.