A governor is a system that is used to maintain the mean speed of an engine, within certain limits, under fluctuating load conditions. It does this by regulating and controlling the amount of fuel supplied to the engine. The governor hence limits the speed of the engine when it is running at the no-load condition, i.e it governs the idle speed, and ensures that the engine speed does not exceed the maximum value as specified by the manufacturers.

All marine vessels need a speed control system to control and govern the speed of the propulsion plant being used on board, as there can be a large number of variations that arise on engine load, which may damage the engine and cause loss of life and equipment. The variations in the load on the engine may arise due to several factors such as rough seas, rolling and pitching of the vessel, compromised ship structure, changes in weight of the ship among others.

Governors are also fitted in auxiliary diesel engines or generators, and alternators on the ship.

Classification of Governors on the basis of Design and Construction

These governors consist of weighted balls, or flyweights, that experience a centrifugal force when rotated by the action of the engine crankshaft. This centrifugal force acts as the controlling force and is used to regulate the fuel supplied to the engine via a throttling mechanism connected directly to the injection racks. These weight assemblies are small and hence the force generated is not enough to control the injection pumps of large engines. They can be used where exact speed control is not required. They have a large deadband and have small power output.

1. They are cheap.
2. They can be used when it is not necessary to maintain an exact speed depending on the load.
3. They are simple in construction and have only a few parts. 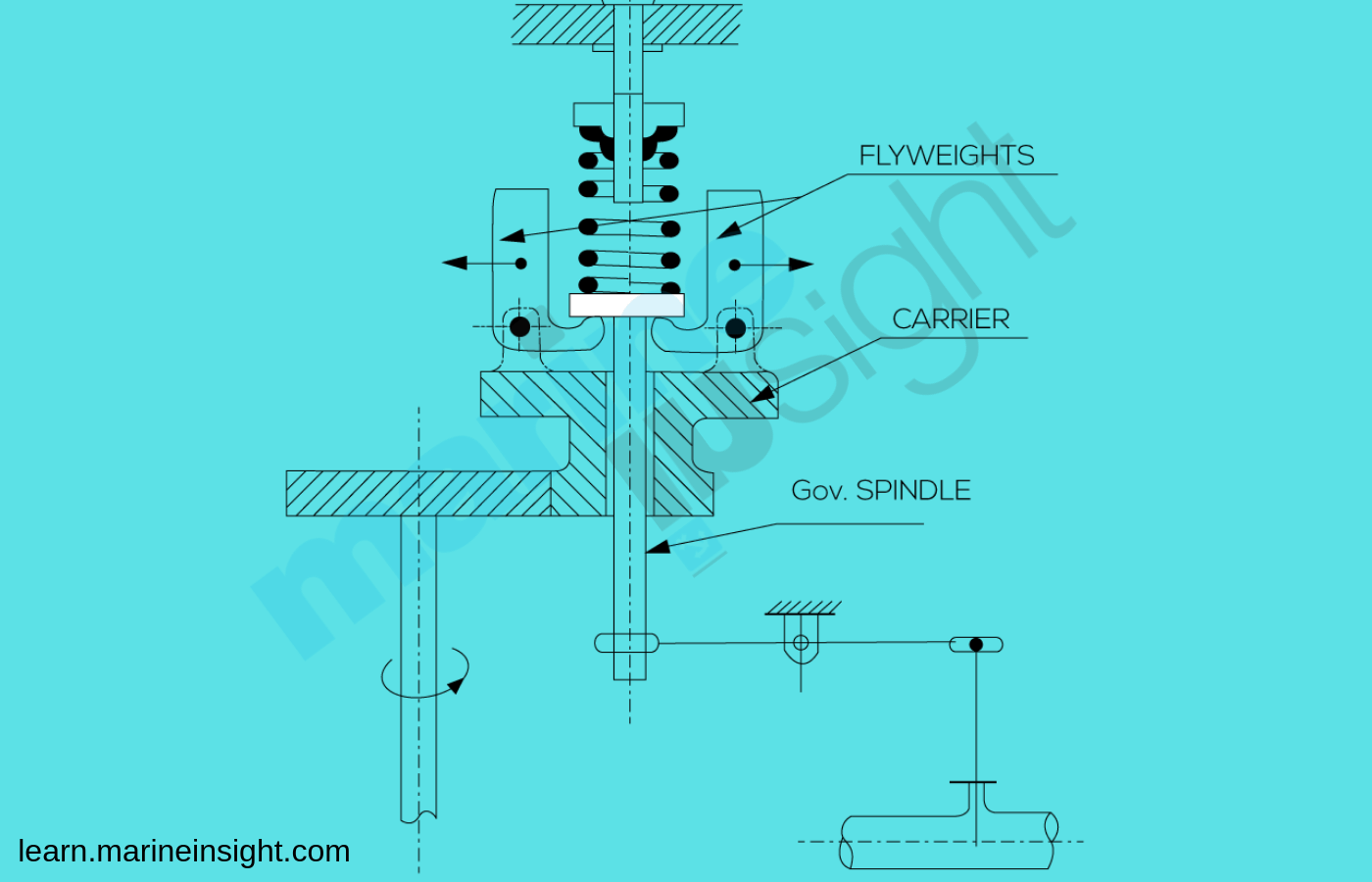 In hydraulic governors, the weighted assembly is connected to a control valve, rather than the fuel control racks directly, as is the case in a mechanical governor. This valve is responsible for directing hydraulic fluid which controls the fuel racks and hence the power or speed of an engine. A greater force can be generated and these governors find application in medium to large size engines. These days most ships use hydraulic governors and are being retrofitted with electronic controls.

Advantages and Disadvantages of Hydraulic Governors

1. They have a high power output,

2. They have high accuracy and precision

3. They have high efficiency

4. Maintenance of hydraulic governors is easy

An ECB (Electronic Control Box), sends a signal to the field which positions the armature, and hence the control valve that regulates fuel delivery. The electric control overrides the mechanical-hydraulic mode when the system is set on the electronic operation.

2. Control functions can easily be built in the governors

3. Presence of indicators and controls have implemented automation

4. They can be mounted in positions remote from the engine and eliminate or reduce the need for governor drives

Classification of governors on the basis of their Operating Principles

Almost all types of governors are fitted with a flyweight assembly. Two or Four flyweights are mounted on a rotating ball head that is driven directly by the engine shaft, using a gear drive assembly. The rotation of the ball heads creates a centrifugal force that acts on the flyweights of the assembly and causes them to move outward, away from their axis of rotation. As the speed of rotation is increased and the degree of outward movement of the flyweights also increases, and vice versa and hence the movement of the flyweights depends on the engine speed.

A spring is installed to counteracts the centrifugal force generated on the flyweights and forces them towards their initial position. This spring is known as the speeder spring. The position of the flyweights and their outward movement is transmitted to a spindle (this may be done through a collar), which is free to move in a reciprocating fashion. The movement of this spindle, which forms the control sleeve, actuates a linkage to the fuel pump control and ultimately controls the amount of fuel injected.

Under normal operational circumstances, i.e. constant speed and loads, the control sleeve remains stationary as the force on the flyweights is balanced by the counteracting force exerted by the speeder spring.

The downward movement of the sleeve is linked to the fuel control racks such that there is an increase the fuel delivery and thus the power generated by the engine. The force on the flyweights increases with the engine RPM and once again the system comes back to equilibrium.

As the load on the engine is decreased, its speed increases.  The flyweights move outward and in-turn the control sleeve moves up as the centrifugal force overcomes the speeder spring force. The movement of the sleeve actuates the fuel pump, fuel delivery is lowered, thus the speed of the engine is reduced and the system comes into equilibrium.

In this case, the flyweights are linked hydraulically to the fuel control assembly. This system consists of a pilot control valve which is connected to the governor spindle and a piston. The piston is known as the power piston and controls the amount of fuel delivered to the engine. It is acted upon by the force of a spring and the hydraulic fluid on opposite sides. The amount of oil in the system, and subsequently, the hydraulic pressure on the piston, is regulated by the pilot valve that is ultimately controlled by the flyweight assembly.

The control valve sleeve is open at the bottom where an oil sump is present in the lower side of the governor housing.  A gear pump which supplies high-pressure hydraulic oil to the system takes suction from the oil sump. It is driven by the governor drive shaft. A spring-loaded accumulator is present which maintains the required pressure head of oil and allows the drainage of excess oil back to the sump.

In case of constant speed and load operations, the valve is positioned to block the ports in the valve sleeve and hence the passage of oil to the power piston, which remains stationary under the balanced forces.

An increase in the load decreases engine speed. In this case, the flyweights move inwards, and that the governor spindle moves downward under the action of the force of the speeder spring. This movement lowers the pilot control valve which directs oil to the underside of the power piston.

As the hydraulic pressure on the piston overcomes the spring force acting on it, the piston moves upward and fuel supply to the system engine is increased. hence increasing its speed. Once the RPM of the engine increases, the control valve rises back to its initial position that blocks delivery of hydraulic fluid to the power piston.

On the other hand, as the load on the engine is decreased and its speed increases, the outward movement of the flyweights under the action of the additional centrifugal force causes subsequent upward movement of the spindle and hence the pilot control valve rises as well. This opens the port such that the hydraulic oil in the system flows to the oil sump from under the power piston through a drainage passage. The power piston then moves downwards under the action of the spring force and reduced hydraulic pressure and hence reduces the amount of fuel supplied to the engine is decreased. This reduces the engine speed and consequently, the forces on the flyweights are balanced once again.

The bushing and plunger must descend at the same speed to keep the port closed, so the needle valve must be adjusted carefully to allow the correct amount of oil to pass through it. This depends upon the engine requirements according to the manufacturer. In case of a decrease in the engine speed, the actuating compensating plunger moves upwards and the pressure on the receiving compensating plunger is increased. It moves up with the pilot valve bushing.

The port leading to the power cylinder remains closed and the excess oil is drained out through the needle valve. The bushing is then returned to its central position.

An Electronic governor provides engine speed adjustment from no-load condition to full load. It consists of a Controller, an Electro-Magnetic Pickup (MPU) and an actuator (ACT) to carry out the necessary speed control and regulation. The MPU is a micro-generator and has a magnetic field. It consists of a permanent magnet with an external coil winding. As shown in the diagram, the MPU is installed above the flywheel teeth and depending upon its distance from the gear teeth or slot, the magnetic field of the MPU varies from a maximum to minimum respectively.

Due to the constantly changing internal magnetic field, an AC voltage and frequency is generated in the outer conducting coil. This AC voltage follows the speed of the flywheel. This is the most important aspect of the electronic control system as the governor controller converts the obtained frequency into a DC voltage signal. It then compares this with a set voltage. The results are calculated by a PID control (Proportional-integral-differential) and finally, the output reaches the actuator which implements the required corrections on the fuel supply to the engine.

Related Read: How to Synchronize Generators on a Ship?

The electronic controller has different modes of operation to implement various functions. These include;

1. Detecting the starting of an engine and subsequently directing the fuel supply.

2. Suppressing the smoke generated by the engine as its speed increases.

5. Idle speed operation: It provides fixed speed control over the entire torque capacity of the engine.

6. Maximum speed control: It is used to eliminate over speeding of the engine

As the load on the engine increases, the fuel supply to the engine is increased and yet it is allowed to run on a proportionally lower speed. This feature of a governing system is termed as droop. When more than one prime movers are connected to the same shaft, as in the case of generating electrical power, droop permits a stable division of load between them.

What is the use of the speeder spring?

The Deadband of a governor gives the range of speed after which the governor starts operating to make corrective adjustments. Within this range, the governor does not operate at all. The width of the Deadband is inversely proportional to the sensitivity of the governor.

The continuous fluctuation of the engine speed around the mean required speed is known as hunting. This happens when the governor is too sensitive and changes the fuel supply even with a small change in the engine RPM. It supplies either too much fuel or too less fuel and the governor sleeve repeatedly moves to its highest position. This cycle continues indefinitely and the engine is said to hunt.