Marine engines on ships are responsible for propulsion of the vessel from one port to another.  Whether it’s of a small ship plying in the coastal areas or of a massive one voyaging international waters, a marine engine of either 4-stroke or 2-stroke is fitted onboard ship for the propulsion purpose.

As mentioned earlier, IC (Internal combustion) engines are mainly used for marine propulsion and power generation purpose. The working of the marine engine can be explained by the following procedure:

– The fuel is injected at a controlled amount at high pressure

– A mixture of fuel and air is compressed inside the engine cylinder with the help of piston, which results in the explosion of the mixture when pressurized due to compression. As a result, heat is released which increases the pressure of the burning gas 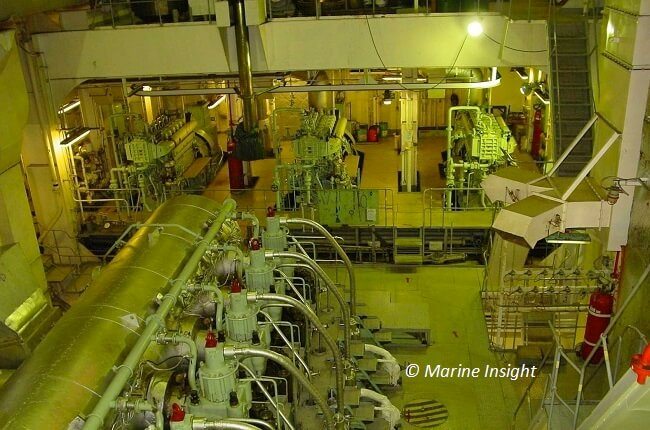 – The sudden increase in the pressure pushes the piston downwards and transmits the transverse motion into the rotary motion of the crankshaft using connecting rod arrangement. The explosion is repeated continuously for maintaining the power output depending upon the type of marine engine and its usage.

The crankshaft is connected via a flywheel, either to the alternator or to a propeller arrangement for doing the mechanical work. To obtain continuous rotation of the crankshaft the explosion has to be repeated continuously.

Before the next explosion, the used gases are drawn out from the cylinder through an exhaust valve and fresh air is supplied, which helps to push the used gas and also to provide fresh air for next combustion process.

The two basic types of marine diesel engines are –

A 4 stroke engine can be installed on the ship to produce electrical power and also to propel the ship (usually in small size vessel). This engine takes 4 cycles to complete the transfer of power from the combustion chamber to the crankshaft.

Related Read: Why 2-stroke Engines are Used More commonly for propulsion than 4-stroke on Ships?

The events taking place in I.C. engine are as follows:

The four events are completed in four strokes of the piston (two revolutions of the crankshaft). An inlet and exhaust valve is fitted on top of the cylinder head to draw in fresh air and to expel the used exhaust gas.

Both, the valves and the fuel pump (which supply fuel to the injector), are operated using camshaft, which is driven by crankshaft using a gear drive. In a four-stroke engine, the camshaft runs at half the speed of the crankshaft. The crankcase is open to the piston liner arrangement, which assists in the lubrication of the liner.

The 2 stroke engines are used for vessel propulsion and are bigger in size as compared to the 4 stroke engines. In this engine, the complete sequence is complete in two cycles i.e.

A basic ship engine working video is shown below:

How and where is ship’s engine made?

If you have seen engines on ships, including small 4 stroke generator engines and also the massive 2 stroke propulsion engines, one thought which must have crossed your mind is how and where these engines were made?

The most famous engine manufacturers, whose engines, are used in ships are:

Related Read: The Most Popular Marine Propulsion Engines in the Shipping Industry

Wartsila is still the Guinness World Record holder for the largest ship engine ever built.

The Wärtsilä RT-flex96C two-stroke engine fitted with turbocharger holds this record. Manufactured for large container ships, its dimensions are as follows:

Where are marine engines made?

These marine engines are built at the facilities of the manufacturers. For e.g. MAN Diesel has production facilities in Augsburg, Copenhagen, Frederikshavn, Saint-Nazaire, Shanghai, etc.

The ship’s engine can also be made in reputed shipyard if there is a contract between the two companies.

The engine is usually made in three different sections (explained below) and depending upon the size of the engine room and access for the installation, it can be fitted in the shipyard either in sections or as an entire assembly.

Related Read: How Massive Main Engines are Fitted in the Ship’s Engine Room?

The material used for making the ship’s engine and different ship engine parts are:

Bedplate: The bedplate is the bottom-most portion of the engine which is the base of the engine and accommodates crankshaft bearings and A-frame. For the small engine, a single casting of cast iron is used and for large 2 stroke engines, fabricated cast steel transverse sections with longitudinal girders are used.

A frame: The A-frame, as the name suggests, is similar to the shape of letter ‘A’ and is installed above the bedplate of the engine. It is built separately to carry the crosshead guide and on top, it supports the base of the entablature. The bottom surface of the A-frame is machined for making a mating surface to install on top of the bedplate.

Entablature: The entablature, also known as cylinder block, is made from cast iron and used to accommodate the cooling water and scavenge airspace. Depending upon the size of the engine, the casting can be either for individual or multicylinder (bolted together). The lower portion of the cylinder block is machined to form a mating surface and fastened with the A-frame using fitted bolts.

The other different ship engine parts which are fitted inside the engine are: 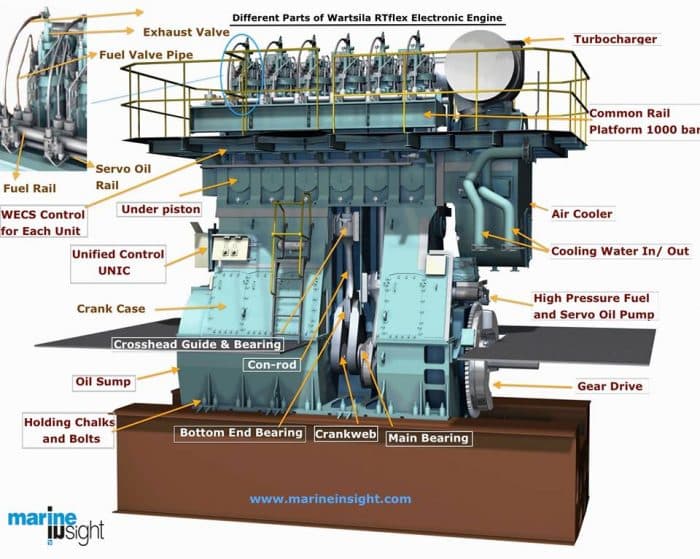 The basic ship engine maintenance comprises of planned maintenance which includes overhauling of important moving and static parts of the combustion chamber.

Following are some of the most common maintenance done on the marine engine:

Related Read: Types of Main Bearings of Marine Engines and their Properties

The time between overhauling of different parts of the engine is provided by the manufacturer in the engine manual. The maintenance needs to be performed as per the time specified between two overhauling durations, irrespective of issues shown by the engine.

Apart from timely overhauling, the engine ratings and power needs to be checked using digital power indicator. The scavenge space inspection is also done to check the condition of the piston ring, which in turn defines the efficiency of the lubrication system of the cylinder liner.

Marine engines used on ships are some of the most sophisticated and complicated engineering works. Marine engineers are therefore provided special training for operating, maintaining and troubleshooting marine engines on board ships.

How Marine Air Charging System For Engines Has Changed Over Time