You are here: Home › Guidelines › A Detailed Explanation of How a Ship is Manoeuvered to a Port
TwitterFacebookLinkedInPinterestBuffer

Manoeuvring is an operation during which a vessel enters or exits coastal waters of a country, crosses several ships on the way, and proceeds towards or departs from a berth or jetty of a port.

A ship may need to manoeuvre not only while arriving or departing a port but also while crossing canals and traffic zones. In this process, maximum number of man power is made available and all unmanned systems are change over to manual control so that full control of the ship is achieved.

Most of the collisions and grounding of ships are reported during manoeuvring of the vessels, and hence the manoeuvring operation is considered most crucial time a ship faces in her voyage, both from ship’s and seafarer’s perspective .

When entering or departing a port, a marine pilot, ship pilot, or maritime pilot is called on the ship, who manoeuvre the ship from a point of entry, known as the pilot point, up to the berth or vice versa.

It is essential before starting any manoeuvre, to understand the effects of the wind, tide, state of the ship’s trim, draft and freeboard, the ship’s equipment and manoeuvring aides etc. along with the assistance received from tugs.

The master makes an assessment of the ship’s elements and situation and then devises a plan of action.

The plan of action needs to be flexible and the master should also have alternate plans in mind in anticipation of any change in the circumstances as the manoeuvre proceeds.

The pilot of the ship makes an effective contribution towards safe navigation in confined waters and the approaching port, of which, they have an up to date local knowledge.

It is very important to note that the responsibility for any vessel’s navigation cannot be transferred to the pilot. The master and the officer of the watch shall always remain responsible with regard to navigation duties and obligation.

The information exchanged between the master and the pilot shall include but not be limited to:

The master when planning his manoeuvre takes into consideration the above facts and also the effect the wind’s force and direction has on our ship, relative to its trim, draft, and speed, along with the factors governing the centre of turn and the positions for securing the tug and how they can be used in the most effective way.

The centre of turn of a ship is the pivotal point, around which, the ship will rotate as a result of a turning force.

The situations as the berth approaches are various and depends on a lot of factors such as the under keel clearance, weather, wind, current, tide, available berth length and the distances to the vessel’s forward and aft from the berth, size of the harbour basin etc.

Based on these factors the manoeuvres and combination of tugs’ usage can be made. Even after a lot of planning and years of experience at sea, one can experience new and dangerous situations.

The situation described below is just a basic approach while berthing.

The most common position for securing the tugs, if we have two tugs is, the centre lead forward and aft. This way the tugs can control both the lateral and forward, and the aft movement by either pulling and/or pushing as required.

If there is only one tug that we are going to use then it is usually secured aft. Also most of the times we use the forward tug for pushing only, hence it is not secured to ship at all.

As the master closes the berth, he does not try to bring the ship directly alongside the berth, but plans to bring the ship parallel to the berth and stop just short of the berthing position, clear of the forward and aft ships (if there are any). It is normally one ship’s breadth distance between the ship and the berth.

Once the vessel is all stopped off the berth, the master uses the assistance of the tugs and thrusters to get the vessel in position. He asks the officers in charge of the mooring stations forward and aft to send the spring lines first (most commonly used). 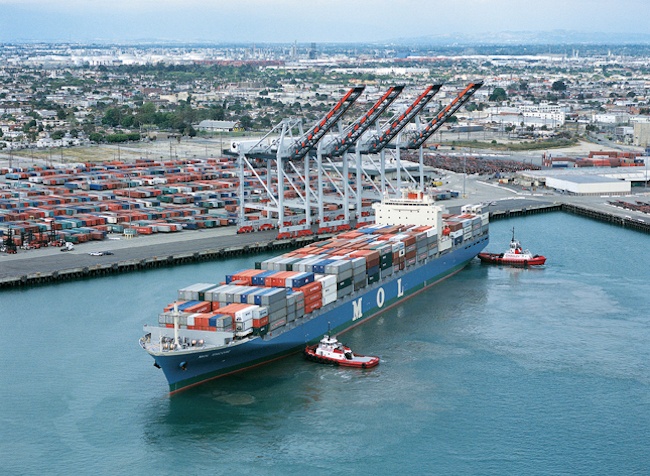 The spring lines keep the vessel from moving forward and aft. The headlines/sternlines are then send. Once all the lines are made fast, all the winches are usually put to 40% auto tension (most common) and the springs are kept on brake.

When closing a berth, the master monitors the ship’s movement and the distance to the pier, and to other moored ships.

Ships are fitted with various instruments such as the conning display, Voyage management system etc. to indicate whether the ship is moving ahead or astern. The ship’s speed and the amount of set and drift is indicated as the ship makes sideways.

These are all excellent aids, but a visual assessment of the relative movements of objects ashore when berthing the ship will give the master a far quicker and more accurate indication of the direction and speed the ship is making over the ground.

10 Ways to Identify Faulty Machinery Onboard Ships
How Marine Fenders Are Used For Ship Berthing?
How Maintenance Work is Done Onboard a Ship?
How the Water Locks of Panama Canal Work?