As the maritime industry marches through the era of stringent environmental regulations and increasing fuel costs, shipping companies and organizations are spending considerable amount of resources to search for viable alternative green ship technologies which would not only help in successfully powering the ships but also satisfy the growing demands of environmental protection norms.

In a recent issue of the Horizon, Lloyd’s Register provided a set of projects which involved ships successfully using wind power in future. According to the test results of one of the concepts, experts believe that if wind power is utilized in the right way, then fuel savings of up to 50% are possible especially on the windy routes.

Using sails for cargo ships is a concept which has been under research for quite some time now. The B9 concept revolve around a cargo ship which uses a unique sail propulsion system utilizing wind energy to produce 60% of the power for ship propulsion and the rest from ancillary engines powered by bio-gas. 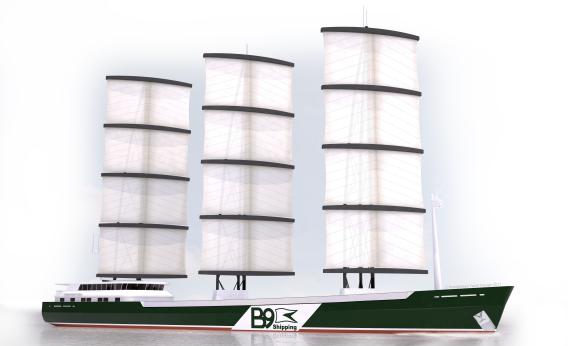 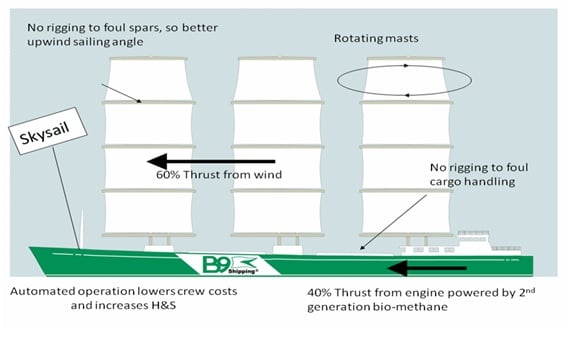 Eco Marine Power’s EnergySail technology utilizes an array of rigid sails which can utilize both wind and solar energy. The sails can be used with other green ship technologies to reduce fuel consumption and gas emissions. The technologies are expected to be to implemented on a future ship called the Aquarius Eco Ship.

The EnergySail is unlike any other sail – it can be used even when a ship is at anchor or in port and has been designed to withstand high winds or even sudden micro-bursts. It can be fitted on a wide variety of ships from large Capesize bulk ore carriers to naval and coastguard patrol ships. 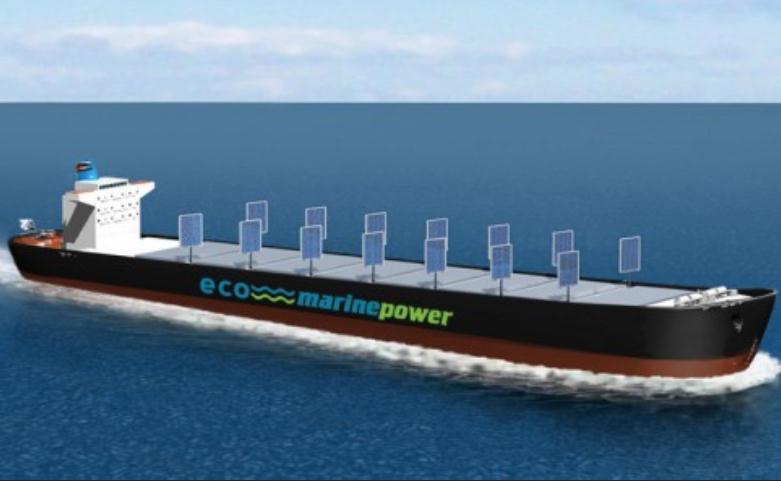 Watch the video of Energysail:

The skysail technology uses towing kites to move the ship forward, reducing the load on the engine and lowering fuel consumption. This innovative use of wind energy has been implemented on several types of cargo ships with favorable results. Click here to find out how skysails work. 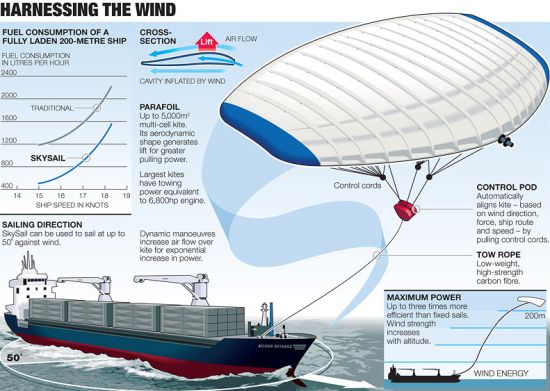 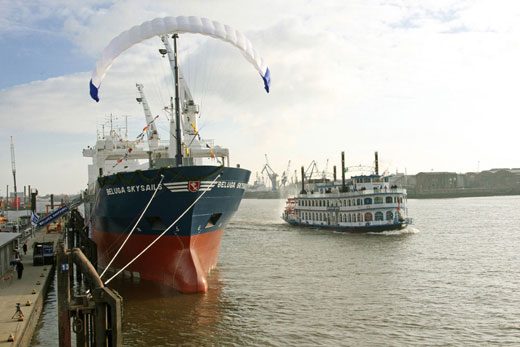 The 400-foot Beluga SkySails, the world’s first cargo ship to use a SkySail

Flettner rotors are special vertical spinning cylinders which utilize the Magnus Effect for ship propulsion. This ship concept utilizing such technology are known as rotor or Flettner Ship. 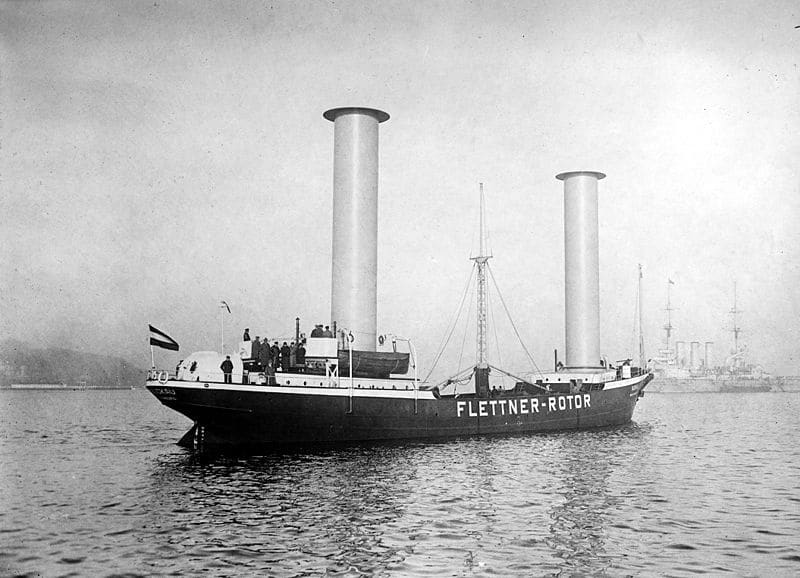 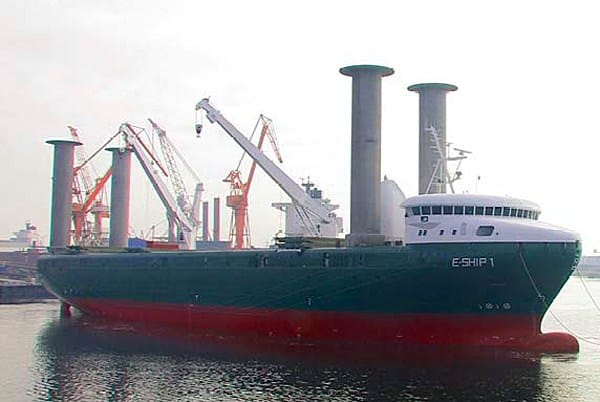 Watch A Video on How Magnus Effect Works

With a dream to achieve a Zero Emission Ship by 2030, NYK has designed the futuristic Eco-Ship 2030. 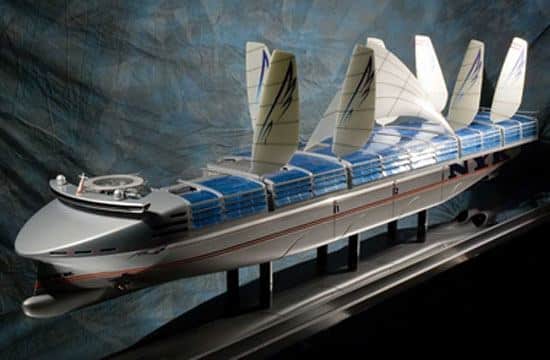 The green ship concept has a variety of unique features such as weight reducing structure, optimized hull form for propulsion efficiency, solar and wind power harnessing equipment, and fuel cell utilization to reduce the emission of carbon-dioxide by staggering 69%.

The ship concept also utilizes new materials such as extra high tensile steel and alloys, and composites, and carries lighter containers and less fuel for a total reduction of 20% weight and 9% carbon-dioxide. Click here to know more about Ec0 ship 2030.

STX Eoseas is an innovative cruise ship concept developed by STX Europe. The project aims at using marine clean technologies to reduce power consumption by 50%, emissions of CO2 by 50%, SO2 by 100%, NOx by 90%, and ash by 100%.

The ship is equipped with an innovative sail concept patented by STX France which helps in using wind energy for propulsion.

Click here to know more about the Eoseas project. 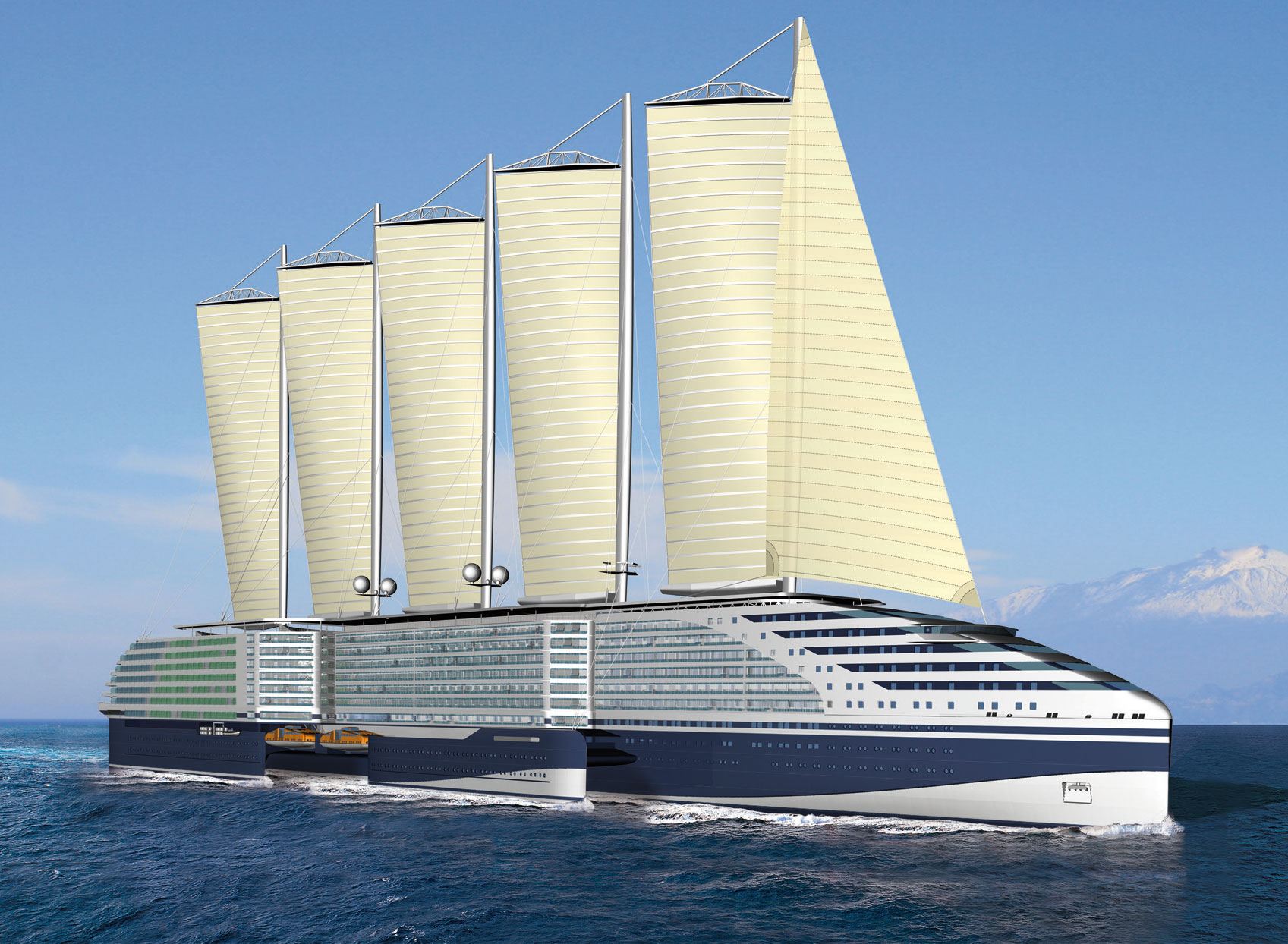 Supposed to be known as the first zero-emission ship concept of the world,  Wallenius Wilhelmsen’s E/S Orcelle uses a variety of green technologies to form a system which doesn’t release any emissions in the atmosphere.

In design, the Orcelle combines sustainable forms of energy captured through sails, solar panels and wave energy converters to generate the energy required by the vessel. This is then used to extract hydrogen from water with the aid of fuel cell technology. The resultant fuel is a clean fuel that can then be made use of. In this manner, there are zero emissions from the vessel as such. The subsequent electricity generated, can also be used immediately or stored for times of no wind, sun or waves.

Watch the video of E/S Orcelle

These are some of the most famous ship concepts which use or plan to harness wind energy as propulsion power for ships.

Do you know any other ship technology which harnesses wind power for propulsion?