A small tanker was making way in restricted waters and in darkness, proceeding full ahead at speeds sometimes greater than 19 knots (SOG) as a result of a following tidal current close to 3 or 4 knots. The officer of the watch monitored the vessel using the starboard radar and the ECS, and the Master was on the bridge. The vessel was approximately 2.6nm from the next course change of 071°T, through a channel that is 0.3nm at its narrowest.

The OOW, who had the con for the first time in this area, requested that the Master take over before the large alteration to port at Island A (see below), approximately 0.7nm before the next course change waypoint. The Master took over the con and the OOW went to the chart table and began preparing the next chart. The helmsman was manually steering a course of about 140°G and the vessel was now proceeding at 16.7 knots. The Master was monitoring the vessel’s progress on the starboard radar; he had set up a parallel index to determine when to commence the port turn. A parallel index line was also set up on a course of 071°T to maintain a distance of 0.22nm off the northernmost point of Island A. 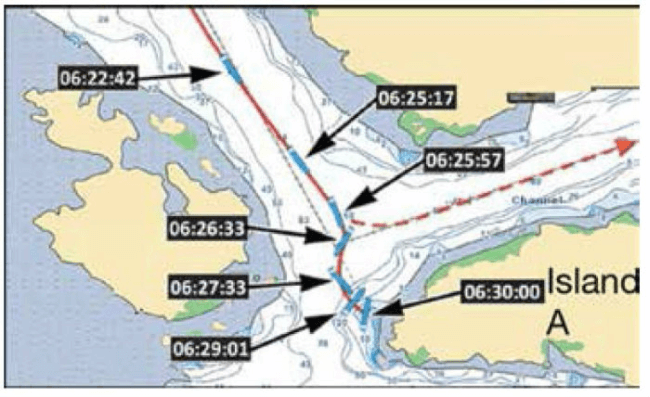 Over the next three minutes, the Master continued to monitor the vessel on the radar as it swung back to port while querying information being provided by the OOW. At some point during this time the Master applied astern propulsion. Nonetheless, the vessel made bottom contact west of Island A on a heading of 012°G. The engines and the bow thrusters were used to manoeuvre the vessel back into the channel, and the vessel continued its voyage while the crew sounded the tanks and checked for damage. A crack approximately 0.6m long was found in No. 3 port water ballast tank that was allowing water ingress.