A small tanker was manoeuvring to leave port without tug assistance. The departure manoeuvre began at twilight, with winds from the south of about 10 knots. The pilot, Master, OOW and helmsman were on the bridge. The departure plan, as discussed by the bridge team, was to let go aft and bring the forward spring lines under tension with the engine dead slow ahead and wheel hard to port, swinging the stern away from the berth to starboard. With the stern clear the engine was to be put astern and the vessel backed away from the berth, as shown in the simplified diagram below, steps 1 and 2. The vessel was equipped with a controllable-pitch left-handed-turning propeller. The berthed vessel forward was not seen as a hindrance.

On the first attempt, the wind, which was pressing the vessel on to the berth, brought the vessel’s stern back close to the berth, nullifying the manoeuvre. It was agreed to moor the vessel again and make another attempt. As the vessel was closing the berth it had some speed astern. 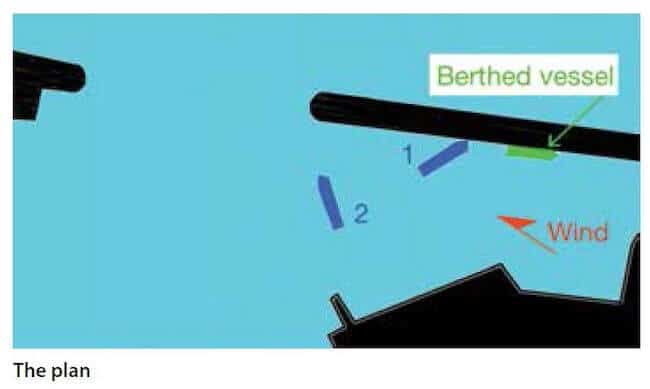 Ahead engine was applied but the vessel still bumped the fender astern. Then, because too much ahead power had been used, the vessel surged forward and came into contact with the vessel moored ahead, its port bow contacting the starboard aft quarter of the other vessel. The port side anchor remained entangled on the stern railings and deck fittings of the moored vessel. 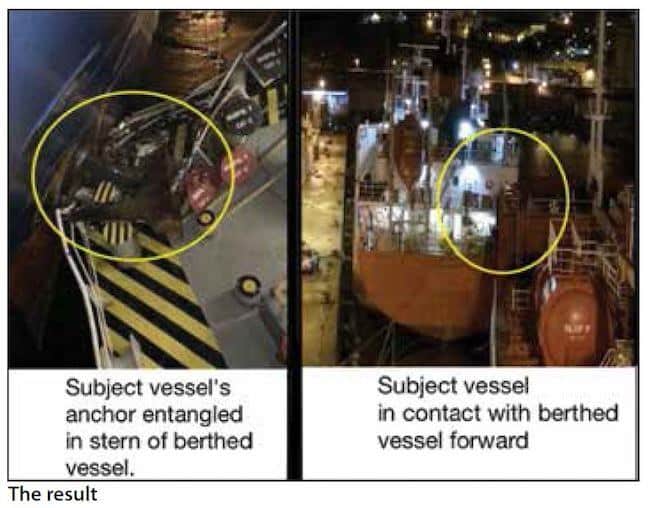 Real Life Accident: Contact Damage During Ship-To-Ship (STS) Operation
Want to share your tips and advice? Got questions? Visit the community forum to ask questions, get answers, meet people, and share your tips!