A container vessel was leaving port in darkness under the con of a pilot. The third officer and the Master were also on the bridge and a helmsman was steering by hand. On leaving the container ship, the pilot was scheduled to embark on an inbound tanker near the entrance of the buoyed port channel.

The tanker was approaching the entrance to the port channel and preparing to pick up the pilot. The Master, the OOW and a helmsman steering in hand mode were on the bridge. The tanker was about one nautical mile (1nm) from No 1 buoy, making 126° COG at about 2kt. At about this time the port control authority was in an unrelated communication with a tug and had instructed the tug to ‘cross 1nm astern of the tanker’. The tanker’s Master heard part of this radio exchange and assumed that port control was talking to the outbound container ship in relation to his ship. 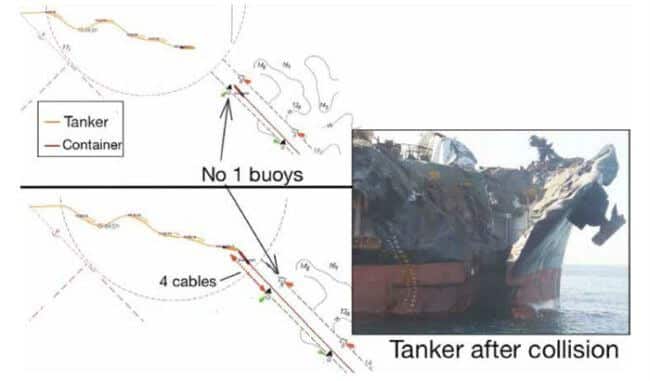 The Master of the tanker assessed that to pass astern of his vessel, the container ship would alter course to port on clearing the channel.

As the container vessel passed between the No. 1 buoys its speed was about 11kt. The tanker’s Master saw the outbound container vessel pass between the No. 1 buoys and became concerned that the vessel had not altered to port as he had expected. He called VTS port control on the VHF radio to inquire. At this point, the pilot was still on the launch after having left the container ship. Shortly thereafter the two vessels, now both 4 cables from the entrance to the buoyed channel and near the centreline, collided bow to bow.

The official investigation found, among other things: