The ocean drilling vessel, D/V Chikyu is operated by the Japanese Centre for Deep Earth Research (CDEX) as a part of the nation’s involvement in the IODP (Integrated Ocean Development Program). The singularity of the vessel is that it is built for the sole purpose of penetrating into the earth’s mantle to research seismologic patterns and to ascertain whether life-bodies exist in the deeper parts of the ocean.

Built in the year 2005, the vessel takes its name from the Chikyu Hakken which means Earth Discovery in Japanese and is capable of penetrating to depths over 2500 metres beneath the oceanic bed. The ship can have a crew of around 150 which includes professional researchers and scientists. The rotational transference of the crew is carried out on-sea while the required provisions are supplied through copter charters. 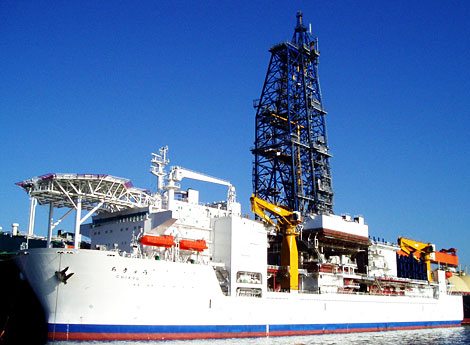 Measuring 210 metres lengthwise and 38 metres breadth wise with a height of over 16 metres, the ocean drilling vessel weighs over 57,000 tons. It can traverse at a maximum speed of about 12 knots with a draft of over nine metres. The vessel uses the riser drilling technology to carry out its operational functions of drilling and penetration under the ocean bed.

The crane erected in the middle of the ship’s deck (amidships) stands at a height of 70 metres with a drill train of about 10,000 metres. The length of the train is thrice the length of Mt. Fujiyama – the tallest mountain peak in the country – with a hoisting capacity of over 1,200 tons.

In order to ensure that there are no interruptions from natural obstacles like wind and tides while it’s carrying out its deep sea operations, the vessel has been equipped with six thrusters that are computer-operated. These thrusters neutralise the obstacles and help the vessel to stay in position right throughout the course of the drilling.

The ship is also equipped with a GPS system that helps to pinpoint the exact location under the ocean bed where the drilling needs to be carried out. Once the vessel starts its operation, it’s anchored in the location for nearly a year, till it achieves its target depth of 7,000 metres. 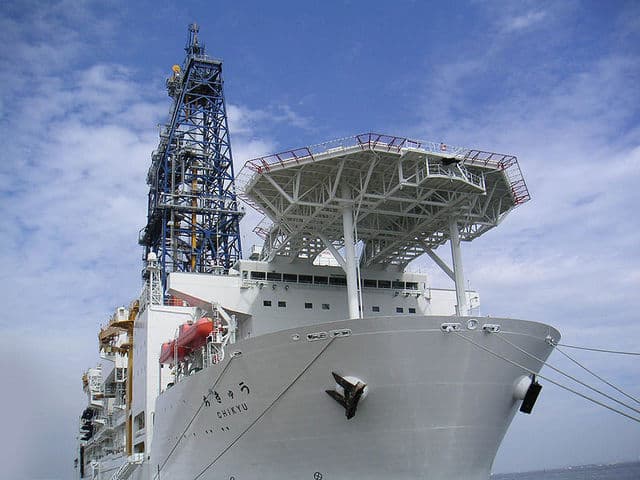 The ship’s drilling speed reduces as it penetrates further deep beneath the ocean bed, reaching to about a depth of three metres per hour after it crosses the 4000 metres mark. At regular intervals, samples of rocks from the earth’s inner layers are collected for studies and analysis, till the vessel penetrates its target depth.

The Chikyu is an important research vessel in contemporary times. Through its help, the many unsolved properties of the planet can be revealed which could help in the better sustenance of the future generations.