You are here: Home › Types of Ships › Top 10 Aircraft Carriers in the World in 2021
TwitterFacebookLinkedInPinterestBuffer

An aircraft carrier is not a mere big vessel that is equipped to engage in warfare. With never-ending territorial disputes worldwide, the aircraft carrier is a symbol of prestige and power for the navies across the world. These new ‘battleships’ have been one of the biggest assets to the warfare merchandise of all nations. Ever since their inception, these ships have made a huge difference for the defence system of several countries.

Known as floating air bases, these giant aircraft carriers are equipped with a full-length flight deck capable of carrying, arming, deploying, and recovering aircraft. Acting as the capital ship of a naval fleet in a waterfront, these vessels can carry numerous aircraft including fighters, strike aircraft and helicopters, etc.

Currently, most of the world powers are operating or building technologically advanced aircraft carriers to safeguard their maritime rights and interests. There are a total of 41 active aircraft carriers in operation by thirteen navies across the world.

While the US Navy has the most number of -eleven -aircraft carriers in service, the navies of China, India, France, Russia, and the UK operate a single aircraft carrier each. In addition, counties such as Japan (4), France (3), Australia (2), Egypt (2), Brazil (1), South Korea (1), and Thailand (1) operate a total of fourteen small carriers that are capable of only carrying helicopters.

Here is a list of top 10 most notable aircraft carriers currently in service around the world.

The US Navy’s ten Nimitz class nuclear-powered aircraft carriers are the second-largest aircraft carriers in the world. They are certainly one of the best of the breeds and flaunt all the features required by such battleships. Named after the  World War II US Pacific Fleet commander Fleet Admiral Chester W. Nimitz, the lead ship of this class, USS Nimitz, was launched in May 1975 and the tenth and last of the class, USS George H.W. Bush was commissioned in January 2009.

They were constructed in 1968 and launched in 1972. Soon they were re-launched as multirole carriers with a nuclear propulsion system.

The title of the world’s biggest aircraft carrier belongs to the US Navy’s Gerald R Ford Class battleships. The first carrier in this class, USS Gerald R. Ford, was commissioned in May 2017 and the four remaining announced vessels of this class are under construction. The Gerald R Ford, which is expected to be fully operational by 2020, features full load displacement of 100,000t and its 78m-wide flight deck features electromagnetic aircraft launch system as well as advanced arresting gear. USS Gerald R. Ford is capable of carrying over 75 aircraft and accommodating a total of 4,539 personnel.

The ship was rebuilt and commissioned for PLAN in September 2012. Currently classified as a training ship, Liaoning offers a platform for the Navy to experiment, train and to be familiar with aircraft carrier operations. Displacing more than 58,000t (full load), Liaoning is capable of carrying around 50 aircraft including fixed-wing planes and helicopters.

The Indian Navy’s largest warship in service, INS Vikramaditya, also finds its place among the biggest aircraft carriers of the world. This 283.5 metres-long modified Kiev-class aircraft carrier was entered into service in 2013. Previously served the Soviet Navy and the Russian Navy under the names of Baku and Admiral Gorshkov respectively, this battleship was purchased by India in January 2004. With a displacement of 45,400t, INS Vikramaditya is capable of carrying a maximum of 36 aircraft including 26 Mikoyan MiG-29K multi-role fighters and 10 Kamov Ka-31 AEW&C and Kamov Ka-28 ASW helicopters.

The first French nuclear-powered surface ship, Charles De Gaulle, is one of the most important flight carriers of France and has been in service since 2001. The ship which has a total displacement of 36,000 tons with a 780X103X27.8 feet structure is the only nuclear-powered carrier in service with the navies other than the US Navy.

With a displacement of 42,500 tonnes, the battleship is capable of carrying 40 fixed-wing aircraft and helicopters including Rafale M, E-2C Hawkeye, Super Étendard, EC725 Caracal, AS532 Cougar, and SA365 Dauphin. The aircraft carrier can attain a maximum speed of 27 knots and it has been provided with two K17 reactors for propulsion. Its design has been made keeping in mind the need for a battleship to show versatility and stealth. Known for its multirole, the ship is highly combatting friendly, with a both assaulting and carrying role.

The flagship of the Italian Navy, Cavour aircraft carrier, has a full load displacement of 30,000t and features several of defence systems such as short-range defence systems, guns and decoy launchers. With a 232.6m x 34.5m flight deck, Cavour is capable of accommodating fixed-wing aircraft including AV-8B Harrier and JSF as well as EH101, AB212, NH 90 and SH3D helicopters. The 2444 meter aircraft carrier can also hold up to 24 main battle tanks. Its maximum speed is 16 knots, achieved with help of six diesel generators. 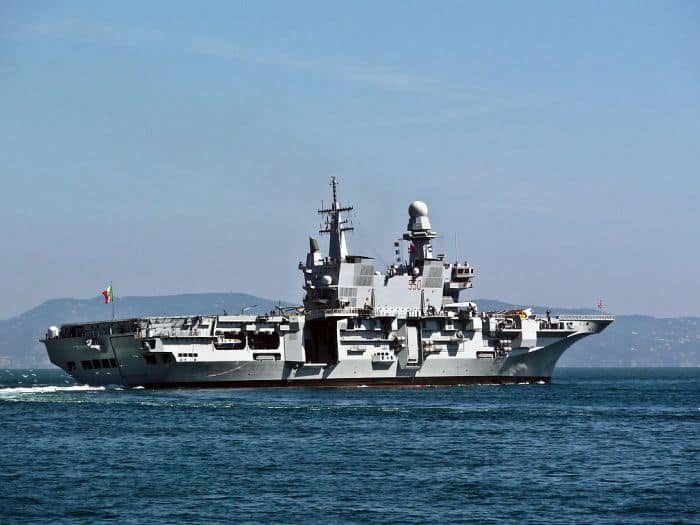 The Spanish Navy’s multi-purpose amphibious assault ship-aircraft carrier Juan Carlos I was the first vessel with the navy to use diesel-electric propulsion. Commissioned on 30 September 2010, Juan Carlos I has a displacement of 26,000 tonnes and a flight deck of 202 metres, featuring a ski-jump ramp.

This navy aircraft carrier has dimensions of about 757.3X105X23 feet and can reach a maximum speed of 21 knots.  Named after former Spanish King, the ship can accommodate Harrier, F-35 Lightning II, CH-47 Chinook / V-22 Osprey and McDonnell Douglas AV-8B Harrier II / Lockheed Martin F-35 Lightning II etc. This makes this particular aircraft carrier highly versatile and a valuable asset for the Spanish army. Juan Carlos I has the capability to house 900 naval personnel, along with equipment and support elements for 1,200 soldiers.

US Navy’s amphibious assault ship USS America is the tenth aircraft carrier on the list. Commissioned in October 2014, USS America, the first vessel in the America-class, is assigned to be the flagship of an amphibious ready group of the US Navy. With a displacement of 45,000 tons, the vessels of these class that are designed to carry helicopters and V/STOL aircraft can perform the duties of big aircraft carriers when configured with 20 F-35B strike fighters. The design of this 844 ft-long ship is based on that of the Wasp-class amphibious assault ship USS Makin Island and features a hybrid-electric propulsion system.

For The First Time, A Female CO To Command US Navy’s Aircraft Carrier

Superyacht Pelorus – One of the World’s Largest Private Superyachts