The speed of the marine engine is controlled by an instrument known as governor, which can be of – hydraulic, electro-hydraulic or electronic governor type.

The most famous types of governor used for both main engine and generator engine is the electro-hydraulic type marine governor. It’s because of this little instrument that the engine speed can be smoothly controlled from a remote space (bridge or engine control room).

The different components of a governor allows for a steady state speed control, along with achieving the required variation in the load.

Following are the important parts of the governor:

– Synchronizer knob: This knob is used for controlling the speed of the engine with a single unit (Main engine) and controlling the load for engines with multiple unit (generator)

– Load limit knob: This knob controls and limits the load on the engine by restricting the travel of the governor shaft, which is connected to the fuel shaft of the engine

– Synchronizer indication knob: This knob does not have any control function and it is used to show how many turns the synchronizer knob has rotated

When handling the electro-hydraulic governor of a marine engine, following things to be kept in mind:

1. Ensure the governor travel/ output shaft connected to the fuel shaft is provided with sufficient over-travel at each end of the terminal shaft. Failing to do so will either prevent it from giving more fuel at maximum fuel position or will shut down the prime mover when the shaft is in minimum fuel position 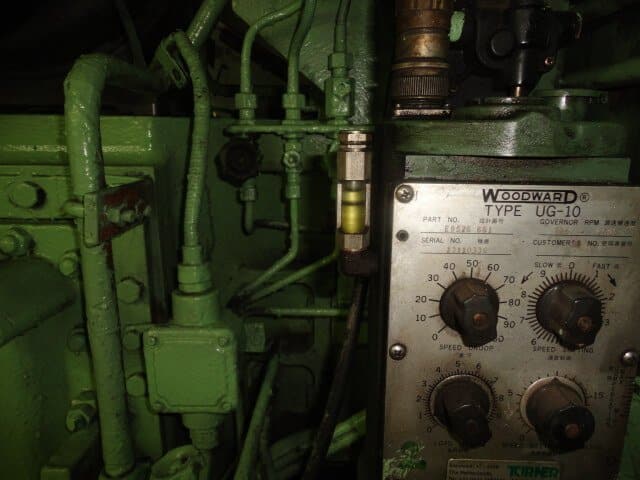 3. Never manually force the prime mover fuel linkage to increase the fuel without the first turning the load limit knob to maximum position of “10” else it will damage the governor’s internal parts

4. Ensure to apply as little compensation (through compensation needle provided for controlling the speed/load variation) as possible as higher compensation setting will lead to more fluctuation in speed with load change

5. For generator system running in parallel, set the speed droop at sufficiently high setting to avoid interchange of load between units while running

6. Synchronizer knob can be used to adjust the system frequency and to distribute the load between the units

7. Ensure to keep a check on the synchromotor for insulation and proper operation provided on the top of the governor, which transfers the remote signal to the governor for increasing or decreasing the engine speed

9. While testing the governor after overhauling, ensure all linkages are proper and oil level is upto the mark. Hold the output shaft with a serration wrench (monkey spanner) to manually control the speed in case the governor malfunctions

10. Never attempt to adjust the settings or the internal parts of the governor until you are thoroughly familiar with the proper procedure

It is very important that ship engineers are familiar with the planned maintenance of the governor. In no circumstances an engine with faulty governor should be operated as it may result in over-speeding of the engine and fatal accidents.

Any important points that can be added to this list?