D’Carb or major overhauling of ship’s generator is an important and complicated task requiring professional skills, knowledge, and experience. Generators being the lifeline of the ships requires periodic maintenance which includes both routine and major overhauling procedures.

As an engineer onboard ships, you will be required to carry out the generator overhauling during routine maintenance or in case of an emergency situation. Thorough knowledge of the generator d’carb procedure is, therefore, a must for engineers of all levels working on ships.

In order to ensure a smooth d’carb process, proper testing of hydraulic jacks and pumps is done before using them for the overhauling procedure.

2. Cylinder head test: The cylinder heads onboard ships are overhauled and reused. Even the head supplied from shore is most of the time reconditioned. Hence it is important to test the heads for any leakage by means of pressure testing. 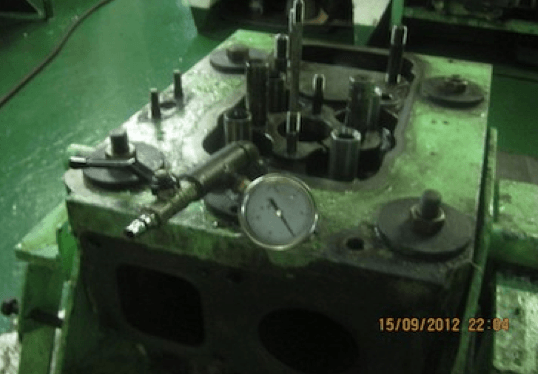 Pressure testing of the generator cylinder head is done by means of water and air.

3. Bearing cap test: The serration provided in the bearing housing holds the two caps against each other along with the con-rod bolts. Hence any damage to bolts will also result in damage to the bearing cap. 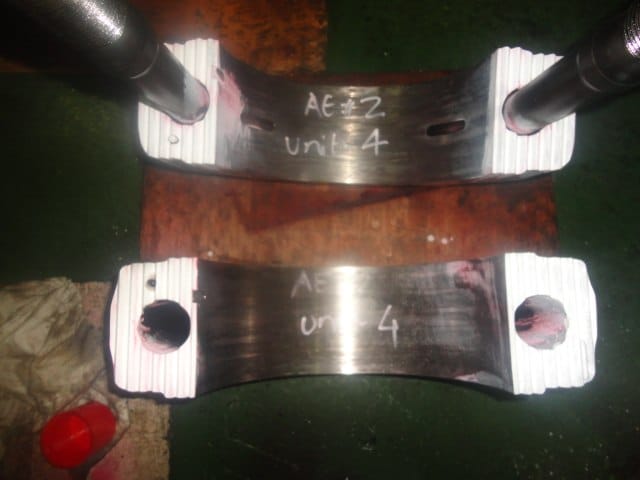 4. Con-Rod bolts test: The bottom cap holds the con-rod bearing by means of bottom end bolts which are subjected to reversal stresses. Crack test of Con-rod bolts is also to be done during every overhauling by using die penetrant test kit.

5. Connecting Rod Bend Test: The connecting rod is subjected to extreme pressures. When overhauling the generator, the con-rod is checked for straightness by inserting a brass rod in the oil hole of the con-rod having slightly less diameter than the oil bore. If the con-rod is slightly bent (which cannot be seen with the naked eye), the brass rod will not pass through the bore.

6. Fuel Injector Test: Fuel injectors are generally re-used after overhauling. With timely use of the injector, its internal parts, which have very fine clearances, are subjected to wear and tear. Increase in clearance leads to dripping or other injection problem, eventually resulting in improper pressure injection.

Hence all the fuel injectors are pressure tested i.e. checking for correct opening pressure in the injector testing stand before using them in the generator.

7. Starting air valve testing: Like fuel injectors, air starting valves are also overhauled and reused. Hence to check the proper operation of the same, all starting air valves are tested by using service air for any leakage before installing into the cylinder head.

8.Relief valve test: The relief valve of the cylinder head is pressure tested to check proper functioning. It is an important part which prevents explosion of the head or damage to the combustion chamber because of overpressure. Pressure testing is carried out on a bench mounted test rig consisting of high-pressure air, pressure control valve, and calibrated gauges. The relief valve is bolted to the accumulator flange and the air pressure is increased until the valve lifts. Settings are done accordingly.

9.The current test: This is an important test which is done before trying out the generator with fuel after the completion of d’carb procedure. Once the d’carb is finished, the turning gear is engaged and with indicator cock open, the engine is turned. The current is continuously monitored. Any fluctuation or increase in the current value indicates obstruction or some problem in the rotating shaft.

10.Alarm and Trips test: The alarm and trips of the generator are electrical systems with wiring and contacts. To check their correct operation, testing of all the alarms and trips of the prime mover including lube oil trip, cooling water high-temperature trip, over speed trip etc. is done.

D’carb or major overhauling of a ship’s generator is a very tedious task for marine engineers on board. Following a step-by-step procedure backed by systematic planning is the base of a successful generator overhauling procedure.

Want to learn more about Ship generator overhauling procedure? Check out our ebook below:

How is Power Generated and Supplied on a Ship?

What’s The Criteria For Reuse or Replacement of Auxiliary Engine Connecting Rod On Ships?