You are here: Home › Marine Technology › Boiler › Choosing A Marine Boiler While Designing A Ship
TwitterFacebookLinkedInPinterestBuffer

Marine boilers used in ships today are mostly for auxiliary purposes in vessels that run on marine diesel engines or diesel electric propulsion. In case of ships using steam turbines (mostly found in high speed vessels used by navies), boilers are a part of the main propulsion system. However, in this article, we will focus on auxiliary boilers, i.e. boilers used for running auxiliary systems in a ship.

To look at this from a ship designer’s point of view, he/she should be able to choose the right kind of boiler for a particular ship depending on the requirement for that particular project. The process is pretty much an application of first principles, but in a somewhat different way. 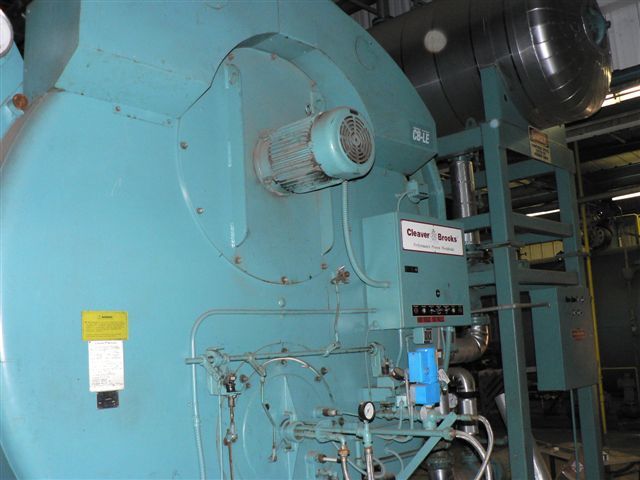 To rate a boiler, one first needs to correctly estimate the steam output required from a boiler for the ship being designed. For this, the three main requirements are:

Requirement 2 – Steam consumption required to raise the temperature of fuel oil in tanks.

We will discuss each of the requirements, and once done, we will see how the obtained data is used to estimate the capacity of the boiler.

Most ships run by diesel engines have fuel oil tanks that are used to store Heavy Fuel Oil (HFO). Since the viscosity of HFO is very high, stored HFO is almost as dense as tar, and its high viscosity makes it unable to flow. But in order to transfer the stored HFO to the settling tanks and then the HFO service tank, the viscosity needs to be maintained at a level corresponding to which easy flow is possible. For this, HFO storage tanks are equipped with heating coils to maintain the fuel at a certain temperature. The heating fluid in the heating coils is steam that is produced in the auxiliary boiler.

The amount of steam flow rate required to maintain the temperature of fuel in each such tank is calculated using the following steps:

A = Area of tank bulkhead under consideration (m2)

T2 = Temperature of the tank to be maintained (0C)

T1 = Temperature of the adjacent medium of the bulkhead considered (0C)

Q1 = sum of heat loss from all the tanks

As we know the heat transfer rate, the mass flow rate of steam can be calculated using the following formula : 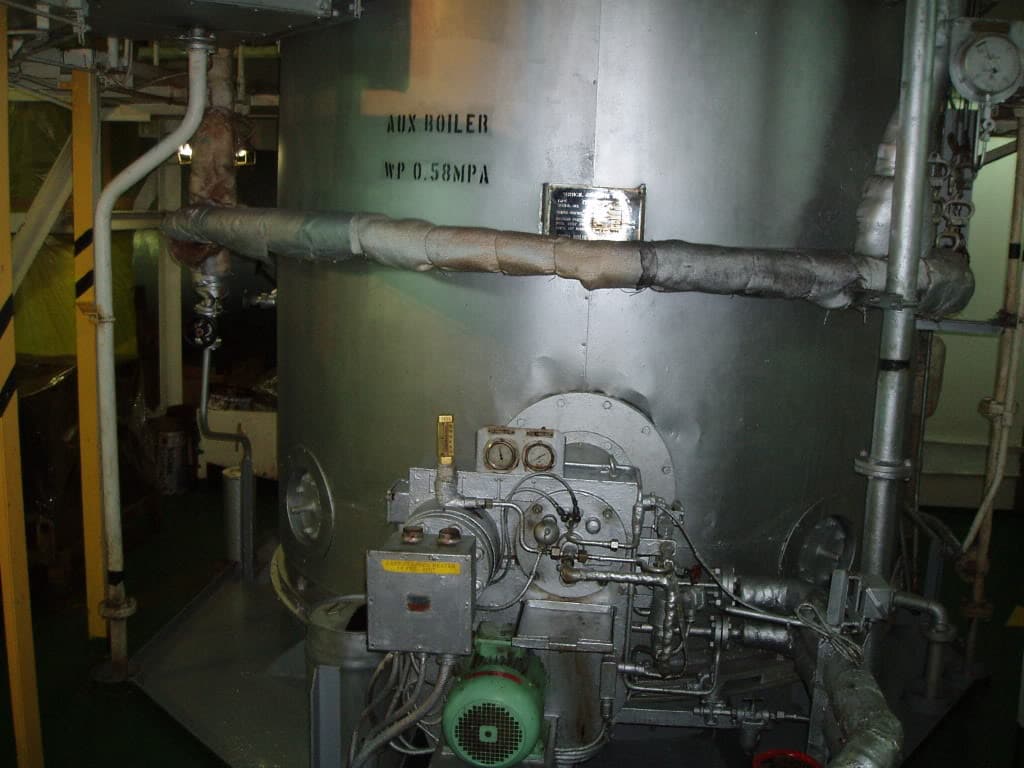 Requirement 2- Steam consumption required to raise the temperature of fuel oil in tanks:

Not only is steam required to compensate the heat losses from fuel oil tanks, but steam is also used to heat the fuel oil to required temperature before being used in the engine.

For this, the time (t) in hours, required to heat up the oil in each type of tank is generally considered as follows:

A sample of this calculation is shown below:

The amount of heat required to raise the temperature of fuel oil tanks can be expressed as:

dT = Change in temperature of the fuel oil (oC)

t = total time over which the heating process occurs (hours)

As we know the heat transfer rate, the mass flow rate of steam can be calculated using the following formula :

Steam is also used in ships to cater to other heating requirements, some of which are listed below:

Heat requirement by all such services are calculated individually and added. The obtained heat requirement is termed as Q3 (for the purpose of this article only).

Once the heat requirements for the three purposes (mentioned above) are obtained, they are added to obtain the Total Heat Rate and Total Steam Mass Flow Rate Required for the boiler:

Now, there are two rating systems to obtain a suitable boiler:

From and At Rating: 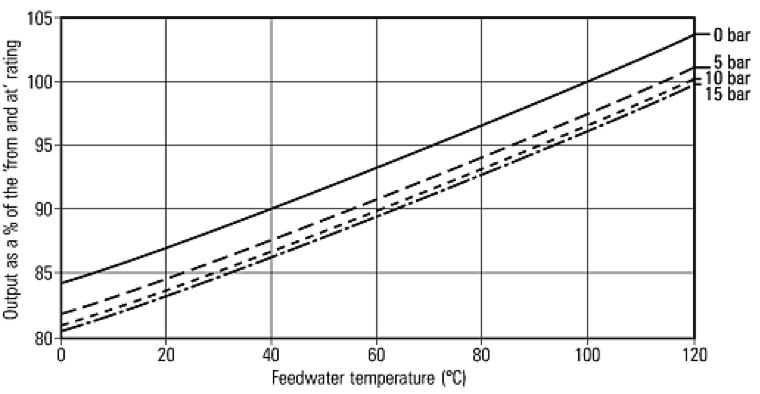 In the above graph, the vertical axis corresponds to the steam output as a percentage of the from and at rating, at different pressures. That is, for example:

Now, when a designer chooses a boiler, he/she needs to specify the rated steam output to the boiler manufacturer. The boiler manufacturer, along with the boiler, provides the boiler from and at rating graph for the proposed boiler, and the above calculation is carried out for various boiler pressures and feed water temperatures, to check that the actual steam output is more than the steam flow rate (mS) obtained in the initial design calculations that we have previously discussed.

While some boiler manufacturers prefer from and at ratings, some others prefer another system called the Kilowatt rating system, which is however just a different way of expressing the same data.

In order to obtain the Actual Steam Flowrate from the kW rating of a boiler, the following relation is used:

In the above expression, the energy to be added refers to the amount of energy added to the boiler by the feed water (which in turn depends on the feed water temperature).

The designer should make sure that the steam output obtained above is more than the steam flow rate (mS) obtained in the initial design calculations that we have previously discussed.

The above checks are to carried out at various working pressures of the boiler, and different ranges of feed water temperature, depending on the steam requirement at various sailing conditions. It is to be ensured that the chosen boiler meets the requirements in all such conditions, at different load combinations.

The type of boiler to be used in the ship is also to be chosen by the designer based on the following criteria:

For most auxiliary boilers, shell and tube boilers are used, where the boiler drum holds the water reserve, and fire tubes run along the length of the drum. The hot gases produced by the burner are carried in the fire tubes that provide more surface area for heat transfer to the water. In most cases, the auxiliary boilers are horizontally oriented in case there are no space constraints, as they prevent pressure fluctuations which is more in case of vertically oriented boilers.

However, for exhaust gas economisers or exhaust gas boilers (These are boilers that do not have a furnace. They are also fire tube boilers, where exhaust gases from the engine are passed through the fire tubes to heat the water in the boiler drum.) vertical configurations are preferable, as it provides less back pressure on the exhaust gas system. Exhaust gas boilers are used when the vessel is on voyage, and when in port, the auxiliary boiler is used.

Energy Conservation in Boilers and Making an Audit Report

10 Boiler Operating Mistakes On Ships That Can Cost Big Time

Do’s and Don’ts for Efficient Boiler Operations On Ships

The Science Behind Marine Boiler Water Circulation on Ships