North Carolina Ports made history Monday by welcoming its first-ever 12,000 TEU vessel to the Port of Wilmington. The ship, Kota Pekarang, is the largest capacity-wise to call the port. The Kota Pekarang is operated by ZIM in partnership with the 2M Alliance which links Asia to Wilmington. 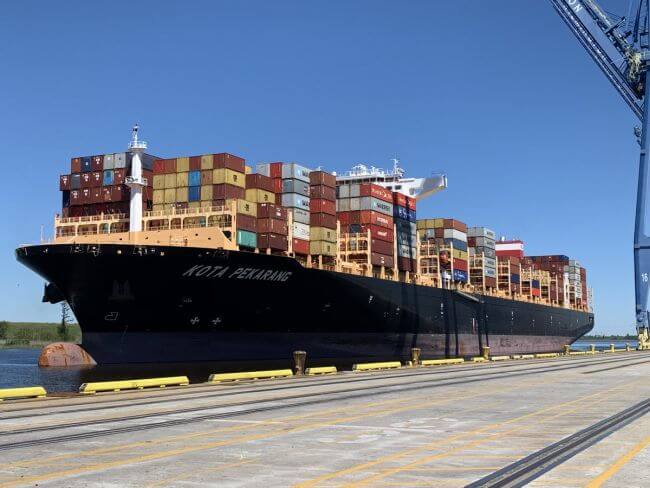 “This is a monumental milestone for North Carolina Ports and the Port of Wilmington,” said Paul J. Cozza, Executive Director, North Carolina Ports. “This is proof of concept that we are big ship ready and capable of handling some of the largest container vessels calling East Coast ports today.”

“The arrival of a ship of this magnitude to the Port of Wilmington signals to our customers that we are ready and capable of handling their growing business needs,” echoed North Carolina Ports Chief Commercial Officer Greg Fennell.

The ship’s visit to Wilmington comes on the heels of the arrival of North Carolina Ports’ third neo-Panamax crane. The third crane arrived in early April as part of the organization’s $200 million capital improvements plan aimed at expanding the Port of Wilmington’s infrastructure to accommodate a 14,000 TEU vessel – the largest ships currently calling the United States East Coast.

“When you consider our investment strategy and couple that with our best-in-class landside and waterside efficiencies, NC Ports is poised to continue to see unprecedented growth and attract more customers to North Carolina’s ports,” added Cozza.