A major blast caused by several gas cylinder explosions onboard an oil production and storage tanker, beached at Gadani shipbreaking plot number 56, killed at least 21 workers yesterday. More than 60 workers are reported injured. It is feared that the death toll will increase as many workers are in a critical state suffering from severe burn injuries. More workers are missing and reportedly still remain stuck in the ship. 24 hours after the blast, the fire on the vessel is not put out.

“This terrific accident is a painful reminder of the dangerous working conditions at the shipbreaking yards in Gadani. Our thoughts go first and foremost to the victims, to their families and friends,” said Ingvild Jenssen, Policy Director of the NGO Shipbreaking Platform. 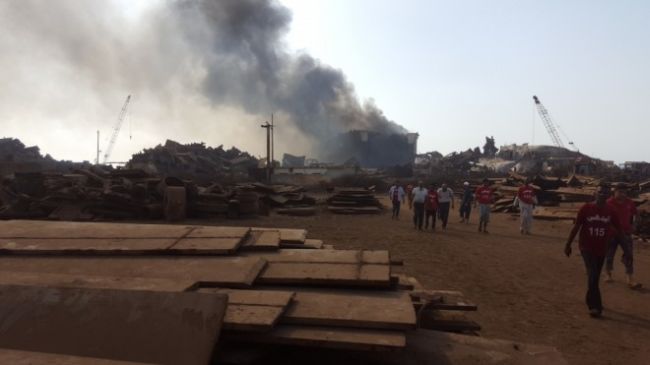 The floating oil production tanker, ACES (IMO # 8021830), was sold to the Gadani shipbreaker by Jakarta-based PT Sinar Mentari Prima and was used in the Jabung Batanghari terminal owned by the Indonesian government company BPMIGAS and operated by PetroChina. The change of flag and name of the ship happened just weeks before it reached the beach of Gadani, which strongly point towards the use of a cash buyer for the sale of the end-of-life vessel. Cash buyers, such as GMS and Wirana, are middle men that specialise in the selling of ships to the beaching yards in South Asia.

The Pakistan National Trade Union Federation (NTUF) has announced three days mourning and a strike at all yards. Workers participated to a rally in Gadani today, protesting against the deplorable working conditions and lack of government support to enforce safety and occupational health laws. The Platform joins NTUF’s demand that all victims of the oil tanker explosion must receive adequate treatment for their injuries and that they, or their relatives, must receive financial compensation for their losses.

“Health and safety must come first. This terrible blast could have been avoided. There is a clear lack of infrastructure and equipment in Gadani to prevent such a deadly accident. Rescue operations are extremely difficult due to the lack of ambulances and firefighting equipment and because rapid access to the ship and the workers that are still stuck inside is extremely challenging,” said Abid Qaiyum Suleri, Executive Director of Sustainable Development Policy Institute (SDPI), Pakistani Platform member organisation.

The NGO Shipbreaking Platform is calling for the closure of the Gadani beaching yards and for a move of the industry off the beach to areas that are under strict control, using alternative and safer methods in docks or along piers.