One year after the signature of the technology partnership between VPLP Design and CNIM, Oceanwings®, a new wind propulsion method, is coming to industrial maturity.

Installation of Oceanwings® onboard Energy Observer is a first step towards reducing the environmental impact of global shipping. Inspired by the rigid sails of America’s Cup, this technology allows energy savings of between 18 and 42% depending on the vessel. A significant figure when it is recalled that 90% of all world trade transits by sea. Some 50,000 ships are therefore responsible for severe air pollution by rejecting into the atmospheric pollutants such as fine particles, and oxides of nitrogen (NOx) and sulphur (SOx). 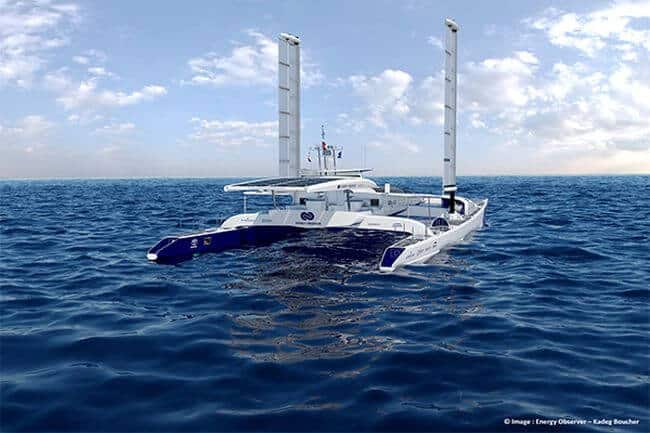 With its fully automated system, Oceanwings® offers the possibility of using wind as the propulsive force, without any need for a sailor-trained crew. The wing is equipped with sensors connected to an embedded intelligence that analyses the environmental conditions and allows it to adapt to them. “Depending on the direction you want to take, the navigation system sends adjustment instructions directly to the sail. You don’t have to do anything. Everything is automatic” says Nicolas Sdez, engineer and designer of the Oceanwings® prototype at VPLP Design.

From the idea to the joint development and industrial manufacturing

At the end of 2017, CNIM and VPLP Design signed a technological partnership agreement for design and manufacture of the Oceanwings® propulsion system. The partnership took up the challenge of designing a product suitable for industrial production. The Oceanwings® wingsails have now reached maturity, with the first two being integrated in the Energy Observer vessel.

CNIM has brought its expertise as an equipment manufacturer and industrial contractor to ensure that the Oceanwings® design meets the technical and industrial challenges of mass production.”Oceanwings® is the association of 2 expertises: the expertise of CNIM, an industrial company for more than 160 years, greatly involved in the design and manufacture of products for shipping, and that of VPLP design, a firm of naval architects and an essential player in the biggest competitions in the world of sailing,” says Philippe Lazare, chief executive of CNIM’s Industrial Systems Division. “We offer an industrial product with high added value that meets not only the performance levels expected by our customers but also the economic constraints imposed by the market.”

A hybrid propulsion system for a wide variety of new markets

Energy Observer, an experimental platform for the energies of the future

This former legendary racing boat has been repackaged into an electrically-powered ship of the future, operating thanks to a renewable energy mix and a low-carbon hydrogen production system using seawater. Now equipped with a revolutionary energy architecture, Energy Observer is the first vessel in the world to produce its hydrogen from seawater thanks to renewable energies. More than a boat, Energy Observer is a reduced model of the energy networks of the future: digitized, decarbonized and decentralized. A genuine experimental laboratory aiming at achieving energy autonomy, each brick of this model has been tested and optimized in extreme environments in order to ultimately enable its application in a terrestrial environment.

UNCTAD Sees Cause For Concern In Sluggish Trade Growth