You are here: Home › Shipping News › Eimskip Has Entered Agreement To Acquire The Nor Lines
TwitterFacebookLinkedInPinterestBuffer

Eimskip has entered into an agreement to acquire the Norwegian shipping and logistics company Nor Lines. Nor Lines is a strategic fit in Eimskip’s core market and the overall transaction is asset-light. The operation of Nor Lines has been challenging over the past years and the business will be restructured in order to improve the company’s services and profitability by aligning it with Eimskip’s current operations in Norway. The acquisition will give Eimskip an opportunity to offer broader value added services to its customers. Norwegian exporters and importers will also benefit from the synergy between the liner services of the two companies. The estimated annual turnover of Nor Lines amounts to approximately EUR 110 million and the company has about 200 employees. The acquisition is financed with cash.

The history of Nor Lines goes back to 1930 and the company is currently operating an extensive service network in Norway,handling general and reefer cargo on sea and land. Nor Lines offers regular services to and from Norway and has over the past yearsbuilt up a land transport system where, among other, rail transport is an important element in a number of service routes.

Today,Nor Lines operates a fleet consisting of seven cargo vessels that operate three different trade lanes in and out of Norway. Restructuring will be made to the vessel fleet and the operation of the company, where Eimskip will take over the operation of five vessels out of the seven and thereby strengthen the combined service network between Norway, continental Europe and the Baltic Sea. Out of the five vessels, one will be owned and four will be chartered.

Nor Lines is providing an extensive land operation with a network of 60 terminals along the Norwegian coast which connect the trucking and sea operation, providing a door-to-door solution. Out of the 60 terminals, the company is operating 14 terminals and 46 are operated by agents. Through the network, the company is also providing warehouse operations and freight forwarding. Nor Lines’ service network consists of 450 trucks, owned and operated by third party, that cover the land based transportation, operating 50 direct lines between the 14 terminals. 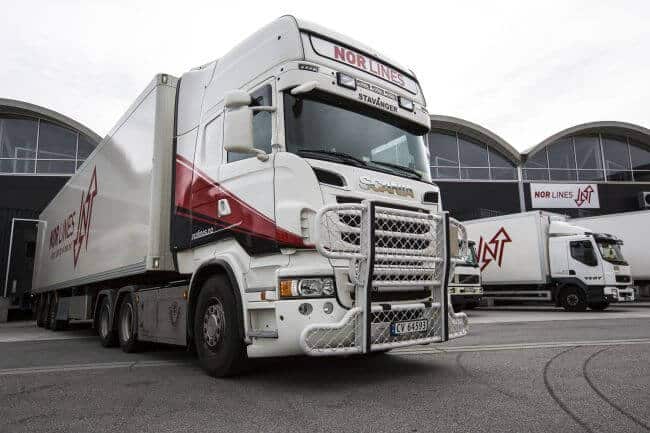 Furthermore, Nor Lines is selling cargo capacity on the 11 vessels of Hurtigruten, which operates along Norway’s western and northern coast, calling 32 ports on a daily basis.

Completion of the transaction is subject to approval by the Norwegian Competition Authority. The acquisition will be further explained at Eimskip’s investor meeting on 18 November 2016.

“The acquisition of Nor Lines is a large step in widening the service scope and strengthening the current services of Eimskip in Norway. Eimskip is currently operating seven side-loaded reefer vessels in Norway which serve between Norway, the Netherlands and the UK, but the acquisition will increase our efficiency since our sailing system will range over to the Baltic Sea and Germany. We look forward to working with the employees of Nor Lines on improving the efficiency of the two companies. The transaction is a part of Eimskip’s accretive strategy of external growth and will further strengthen the company’s liner services in Norway.”

“DSD started the process of finding a strategic solution for Nor Lines early this year. We believe that further consolidation is needed in the logistics industry, and that Nor Lines needs to be a part of a larger structure to be able to further develop its business. We are very pleased with finding a new home for Nor Lines under the Eimskip umbrella and think that this is a very good solution for both the customers and the employees of Nor Lines. After some challenging years, the sale of Nor Lines will enable the DSD group to increase its focus on public transportation through Norled AS and Tide ASA and international shipping through DSD Shipping AS.”