Leading French ferry and holiday company, Brittany Ferries, on 14th January announced that an order has been placed for a new cruise-ferry that will be its largest yet, and one of the biggest such vessels in the world. It will also be the cleanest, most environmentally-friendly ship to operate in UK waters because LNG emits about 25 per cent less carbon dioxide during combustion than marine fuel oil and burns with no smoke. It is entirely free of sulphur and is very low in nitrogen oxide emissions.

Brittany Ferries and STX France have been co-operating for two years on a study regarding the feasibility of powering a cruise-ferry by LNG. The ship, costing some 270 million euros (£225 million) will be built by STX France in St. Nazaire and she will enter service in late spring 2017.

This new ship will replace Brittany Ferries’ current flagship, Pont-Aven, which will move to the Portsmouth-St Malo route. Operating on the longer routes between UK and Spain, she will have many of Pont-Aven’s features, such as an indoor swimming pool, two cinemas, restaurants, pet kennels, and so on. 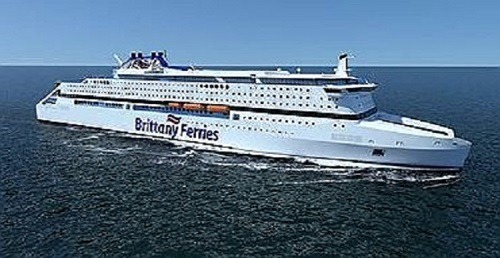 In addition, she will have 30 pet-friendly cabins which have proved so popular on the Company’s other ship to Spain, Cap Finistère, as well as a quiet reading lounge, an observation area,  and a sophisticated spa treatment room with panoramic views. The latest technology will be applied and free Wi-Fi will be available in every cabin and throughout the ship.

Families will be well provided for, with two children’s play areas as well as a teenager zone. As you would expect on any cruise ship, entertainment features prominently and there will be 3 stylish bars and a high-tech stage area.

Brittany Ferries already has an enviable reputation for the quality of its ships, as well as its service and cuisine, but this will be further enhanced by some of the luxury features of this new cruise-ferry. For example, each of the Commodore Suites will have its own balcony.

Mike Bevens, Group Commercial Director comments: “This represents a huge investment which will benefit not simply our customers but the environment as well. Unlike other forms of transport, such as aircraft or trains, every one of our ships is different, each possessing its own unique character. This addition to our fleet will be no exception, but will incorporate all the best features of our other vessels so as to provide our customers with a truly exceptional experience. No other ferry in the UK will come close to offering this new ship’s range of facilities and its launch will mark the beginning of a new era in ferry travel.”