You are here: Home › Marine Ports › What Are Telescopic Cranes?
TwitterFacebookLinkedInPinterestBuffer

Marine cranes are the special equipment which facilitates the lifting of heavy loads and makes the movement of tons of materials from one place to the other easier. Telescopic cranes are a form of heavy cranes employed to transport objects.

Cranes like the telescopic cranes are often used in day-to-day hauling operations but it has also to be noted that these heavy cranes are very important when it comes to carrying out manoeuvring operations in shipping ports.

Telescopic cranes are mobile in the sense that they transport goods and items in a flexible manner. Also since telescopic cranes are further equipped with height adjustments, when it comes to hauling and transferring the goods from one place to another, the problems related to height are completely eradicated.

In shipping ports, telescopic cranes offer one of the best service possible. This is because a port is a place that perpetually bustles with activity. Cargo embarking and disembarking is something that takes place in any port without a second’s pause. This being the case and given the disadvantages of several other types of heavy cranes, telescopic cranes offer premium support to the smooth functioning of the duties in a port. 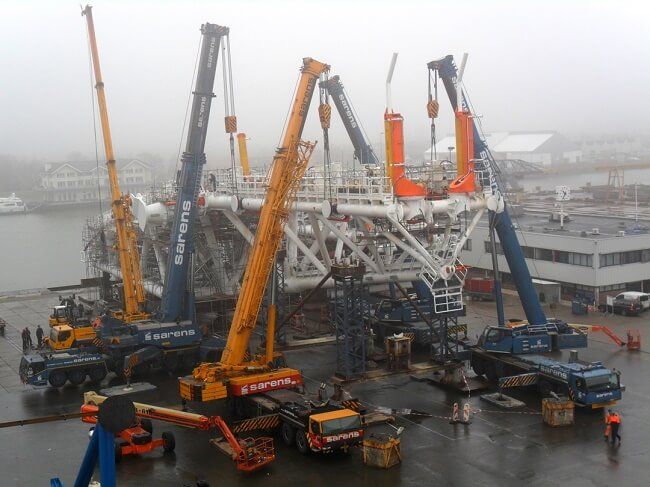 Telescopic cranes also play a  significant role in all sorts of marine jobs either it is ship-to-shore work or erection of oil platforms offshore.

Some of the common applications of marine cranes are listed below:

Construction Industry was the first known field to use cranes and the Ancient Greeks were the first to develop construction cranes. These ancient cranes were either driven by men or animals such as donkey, ox etc.

Then for the first time, the 15th century witnessed the first harbour crane for loading and unloading ships. These cranes were initially made up of wood but with industrial revolution iron, steel and cast iron replaced wood cranes completely.

Related Read: The History of Shipbuilding in India

In 18th and 19th-century steam and electric cranes were developed, which were much more efficient than the manual cranes and provided impressive services at ports. In the late 20th century cranes with boomstick become operational, which we today refer to as telescopic cranes or telescopic boom cranes.

These are hydraulic cranes and they can be mounted on any heavy vehicle and operated from its top. They can be driven to those places where goods and cargo need to be shifted. Further technical advancement improved the working of telescopic cranes by imparting more flexibility in services, higher lifting capacities and height controls.

Telescopic cranes can be classified in different categories as follows:

In any port, one can find many of such telescopic cranes which enable the easy mobility and transfer of cargo to the right containers, thereby providing utility in the best way possible.

The main difference between a telescopic crane and other conventional cranes is that the former has a hollow boom which contains several tubes fitted one side the other.  A hydraulic mechanism enables the elongating and refracting motion of the beam.

The key feature that differentiates a telescopic crane from other conventional cranes is that it has a hollow boom which consists of several tubes fitted one adjacent to the other. These tubes increase the gross hauling height of crane and the objects are raised and dropped with the help of these tubes which work through the hydraulic mechanism. 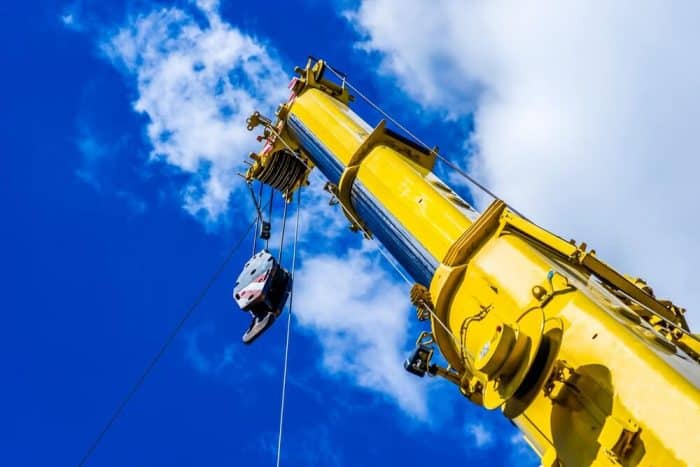 Telescopic cranes also offer the best service in transporting goods as these cranes have the highest reach and they can make height adjustment according to the requirements. No other heavy crane can lift any object to such a height as these cranes do. These cranes can also be utilised in rescue operations i.e. in salvage sunken ships. They also find their application in building oil rigs.

Considering today’s fast-paced development, it is but natural that cranes have started to be used extensively. But in terms of the shipping industry and transportation of goods and cargo via the medium of ships, cranes have always been the primary technology used. This is because when it comes to hauling goods and transferring cargo from one area in a port to another, it is very difficult to use simple luggage racks, for the quantity and weight of the cargo at ports is quite heavy and thus requires help of such telescopic cranes to carry out the procedure of cargo transfer.

Heavy cranes are thus highly important equipment for the shipping industry. And of all the variants of heavy cranes, telescopic cranes are unique because they not only offer utility but also mobility side-by-side.

15 Oldest and Most Beautiful Shipping Ports of the Maritime World

Port of Hamburg: The Largest Seaport in Germany

The Port of Antwerp

7 Ancient Sea Ports of India
Want to share your tips and advice? Got questions? Visit the community forum to ask questions, get answers, meet people, and share your tips!