You are here: Home › Naval Architecture › Different Systems on a Naval Submarine
TwitterFacebookLinkedInPinterestBuffer

Among the systems required for the operation of a submarine and completion of its mission, some have a remarkable similarity with those used in surface ships, whereas other systems are very uniquely designed only for the environment a submarine operates in.

It is to be noted that a typical diesel electric submarine would have more than 150 systems in all, some of which are used to cater to the major systems on-board.

This article will throw light on the primary systems used on-board a typical diesel electric submarine.

To list them, the primary systems on a submarine are as follows:

The propulsion system is housed in the aft section of the submarine. The layout of a propulsion plant of a diesel electric submarine is shown in Figure 1, and the main components are then discussed below.

Economic Motor / Endurance Motor: In normal cruising and war conditions, the submarine operates on different speed modes of the main propulsion motor. In order to increase the endurance of the submarine, when such a need arises, the submarine needs to economise on the consumption of fuel. In such a scenario, the propeller is driven by the economic motor. The endurance motor is located in the second compartment of the propulsion plant, so that either of the two motors can be operated in case of flooding in one of the compartments.

Duct Propulsion System: Some submarines have an additional ducted propulsion system for added redundancy. Ducted tunnels, one on each- port and starboard side, are freely flooded, and provided with a suction propeller driven by individual auxiliary propulsion motors (port and starboard). The operation of these duct propellers would induce a suction of water from the forward porthole of the tunner, and the water jet is ejected from the aft side of the tunnel, resulting in forward motion of the submarine. Operation of both the ducted propellers simultaneously at different speeds is also used to manoeuvre the submarine in the horizontal direction. This system is used when silent operation is a prime necessity at war-zones, as the acoustic signature of the submarine with its main propulsion plant in use, is considerably higher.

The primary generators of power in a diesel-electric submarine are the diesel alternators. A typical design would usually have two DA sets, one for port and starboard each, rated so as to serve the following purposes: 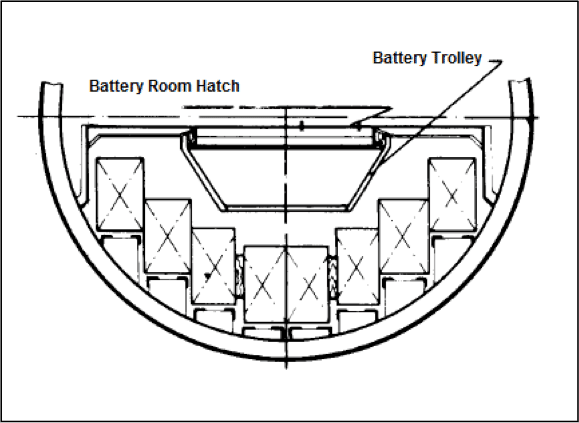 The batteries are placed on stepped floors, and access to the battery compartments is provided by means of a trolley placed just below the battery deck. The operator open the battery hatch and lies flat on the trolley while sliding in in the longitudinal direction to gain access to all the batteries for regular check-ups and maintenance purposes. 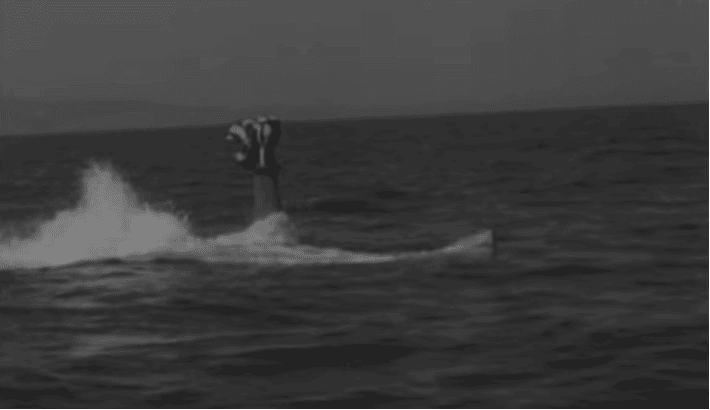 Now, however, modern diesel electric submarines have air independent propulsion systems installed, where the air can be supplied to the diesel engines from liquefied air stored in air bottles inside the submarine. This enables submerged operation, reducing the risks of detection.

This is a critical system to a submarine because air in high pressure requires large amount of energy that can be used to obtain maximum output in minimum time. Air is compressed by five stage compressors and stored at 450 bar pressure. It is further reduced to 150 bar and 45 bar pressures for an array of purposes as discussed below:

The steering system of a submarine comprises of control surfaces – a rudder, and two pairs of hydroplanes. One pair of fins is located at the aft, and the other at the bridge fin. The rudder is used to control the yaw motion, and hydroplanes are used to change the trim angles.

The steering systems are hydraulically controlled, and centrally operated from the navigation room steering console. Local control ports are also provided at the fin and the aft, for emergency situations.

The solid waste generated from usage of stores, and solid human waste are transferred to the garbage treatment system, where ultraviolet and bacterial treatment of the waste decomposes it. The decomposed matter is then stored in unitized decomposable packets, which are shot out of the submarine into the sea by the garbage ejector system. This system is usually located near the longitudinal centre of gravity of the submarine, so that ejection of garbage packets would not cause adverse trimming moments.

A number of detection systems are used on submarines, and the data received, are processed and sent to the weapon control system.

Periscopes: On the development of periscopes, submarines have been enabled with shallow operating capabilities, as in, submarines can be operating at its snorkel depth and raise its periscope above the sea surface to detect the enemy.

Radar Systems: A submarine uses radar systems when in surfaced condition or while snorting at periscope depth. Since radar waves cannot propagate in water, the radar antenna is raised through the radar mast, above the water surface. Radar can be used to detect ships and any other surface object upto the range of the horizon.

Similar to periscopes, there are two types of radar systems – Navigational radar and Attack radar. The navigational radar antenna and a rotating signal receiver at its tip are contained in a separate mast that can be hoisted and lowered hydraulically. Do note that when raised, these mast structures are subjected to external hydrostatic pressure, hence all masts on a submarine are pressure resistant structures. The antenna of the attack radar is positioned along with the attack periscope, so that both can be used in tandem. However, since radar is a source of energy, use of radar as a primary detection device may betray the submarine by allowing a detection of its position before it receives the position of the enemy.

Active Sonar Systems: Sonar systems are used to acoustically detect surface ships and subsurface movement, and they provide more stealth to a submarine when compared to that of a radar system. Active sonar system operates on the same principle as a radar. Rotating sonar transducer arrays are located is located at multiple positions just outside the hull. Their typical layout is shown in the figure below. 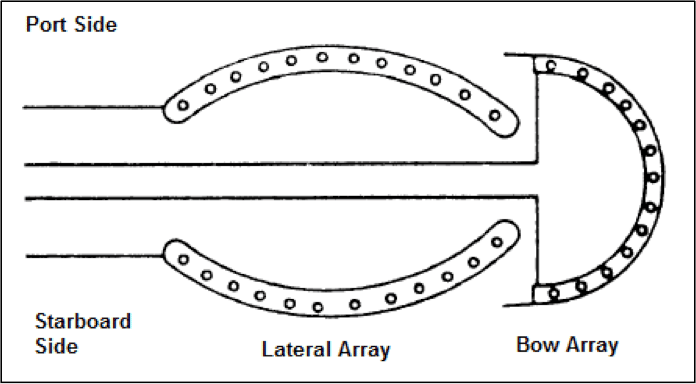 These arrays emit sound waves, which if reflected from an underwater obstacle, are received as distinguishable ‘sonar pings’ (watch the video below).The sound waves received is also converted into electronic format to be displayed on the active sonar screen at the sonar console. In order to prevent disturbances, the positioning of arrays is hugely dependent on the shape of the hull, such that they are placed in positions where the flow around the hull is less turbulent, away from the wake of the propeller, and should have sufficient distance from large machinery like diesel generators and EPM.

The disadvantage of active sonars is, the pings emitted by the array can be easily detected by the enemy within the range of the sonar, thus giving away the submarine’s position. Hence, though all naval submarines are equipped with active sonar systems, they do not prefer to use it when stealth is a prime necessity.

Passive Sonar: This is the most important detection system used in submarines. It consists of an array of sonar hydrophones that only detects external noise and reflects the signal to the sonar control panel in the form of pings.

The range of a passive sonar system depends on the acoustic weather, that is, the salinity, temperature, density of the sea water; the wave conditions, direction of currents, presence of marine life, etc.

The discussion of systems on a submarine is a topic that extends beyond the scope of articles. One can conceptualise the vastness and intricacy of this aspect of submarine design when told that design, development, and integration of these systems on a submarine requires a strong collaboration of mechanical engineers, electrical and electronic engineers, instrumentation specialists, and naval architects. Development of better versions of each of these systems is a continuous process ad depends on how the navy of each country approaches the development of its submarine fleet.