You are here: Home › Marine Safety › What is Ship Arrestor Technology?
TwitterFacebookLinkedInPinterestBuffer

Sometimes it so happens that tanker ships become adrift in the oceanic waters due to some reason. In such situations, in order to prevent tankers from hitting oil rigs or reaching far-off shores or some other offshore structure, a gadget known as ship arrestor has been devised and used.

The ship arrestor is a very brilliant piece of invention because it handles containment of such stray tanker ships perfectly. With the help of a helicopter and a chain rope, the shiparrestor carries out the containment operations on a drifting oil tanker.

The entire process of containing a ship with the help of a shiparrestor is very simple. There is a chain rope which has to be attached to the strayed oil tanker. This chain rope is known as the ‘towline’ and the process is carried out with the help of the helicopter used specifically for this purpose. Attached to the towline is an anchor, specifically fitted for the purpose of restriction of the oil tanker that makes sure that the tanker does not stray any further. 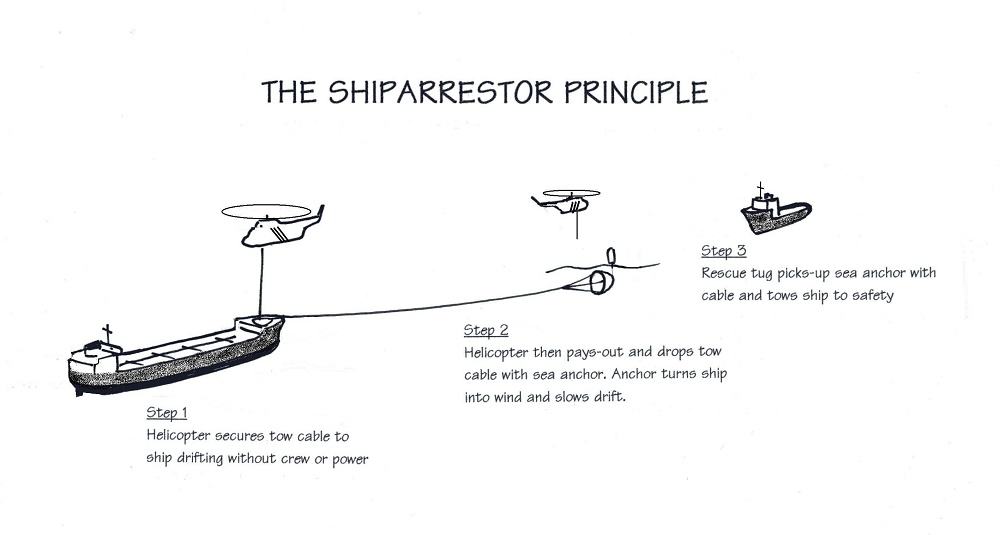 The towline is around 200 metres long and one very important thing to be noted about it is that it does not allow the stray tanker ships to completely stop. It makes sure that an oil tanker does not drift very fast and ends up colliding with an oil rig or gets struck in some shallow water parts. The shiparrestor is pioneer in its own way because it does not require men to carry out the restraining operations on a drifting oil tanker or on tanker ships. It uses modern technological aid and thereby reduces the threat to human lives in case rescue forces are sent to aid such drifting naval vessels.

Also with the help of the ship arrestor possible and potential threats to the marine environment can be avoided. If drifting tanker ships collide with oil rigs then it could lead to an oil spill in the oceanic waters. Such unexpected oil spill could lead to the destruction of lives of marine creatures, not to forget marine flora and fauna. Additionally, such oil spill would also mean tremendous utilisation of financial and other resources leading to a costly procedure for the purpose of cleaning up the oil spill.

Another important thing that can be solved with the help of the ship arrestor is that since the towline is attached to an anchor, it will not allow an oil tanker from drifting away too fast because of the ocean currents and thus enable rescue carriers to catch up with it and tow it to the right place.

Development of technology has resulted in helping the world to overcome the difficulties and come through successfully. The ship arrestor technology, which was developed in 2009, is another contribution of engineering science to positive and proactive development.

Through the ship arrestor, all possible threats to a particular oil tanker or tanker ships, not to forget the marine eco-system, is made avoidable thus aiding not just shipping companies but also the government of nations which depend on shipping majorly.

What is An Emergency Position Indicating Radio Beacon (EPIRB)?

Types of Lifeboats Used On Ship

The Importance of Vessel Tracking System