In the year 2013, the maritime industry saw some very important and interesting shipping projects as they took their initial steps towards reality. A great deal of progress was made in the field of research and development with the launching of new ship projects with advanced technologies and systems.

As the year comes to an end, we take a look at some of the important new ship projects, concepts and developments that were announced in 2013. 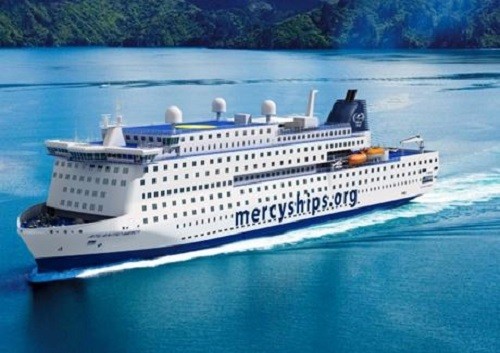 In 2013, Mercy Ships announced that it has reached an agreement with Asian and European shipbuilding firms to purpose-build a new 36,600-GRT hospital ship for Mercy Ships. The vessel will be built at the China Shipbuilding Industry Corporation (CSIC)’s Tianjin Xingang Shipyard.The project will make this vessel the world’s largest civilian hospital ship and the delivery is expected for July 2017. Read more here.

Crowley announced in November that it has signed a contract with VT Halter Marine Inc., of Pascagoula, Miss., to build two of the world’s first LNG-powered ConRo ships, which are designed to travel at speeds up to 22 knots and carry containers ranging in size from 20-foot standard to 53-foot-long, 102-inch-wide, high-capacity units, along with hundreds of vehicles in enclosed, weather-tight car decking. The Commitment Class, Jones Act ships, scheduled for delivery in second and fourth quarter 2017, will replace Crowley’s towed triple-deck barge fleet, which has served the trade continuously and with distinction since the early 1970s.

Hamburg-based company Hybrid Port Energy GmbH awarded a contract to the Shipbuilding and Machinery of Komárno, Slovakia to build the world’s first LNG Hybrid Barge. The barge to be constructed will be equipped with 5 generators supplied by Zeppelin Power Systems to produce total power of 7.5 MW (50/60 Hz) in pure LNG. The LNG Hybrid Barge will be delivered in the summer of 2014 – just two years after the project began.

Blue Star Line Chairman Clive Palmer announced the first model testing of the proposed Titanic II. Titanic II is scheduled to be launched from its construction base in China in 2016, before her maiden passenger voyage retracing its original journey from Southampton to New York. Titanic II would have similar dimensions as its predecessor, with 840 rooms and nine decks. The only changes to the original Titanic would be below the water line including welding and not riveting, a bulbous bow for greater fuel efficiency, diesel generation and enlarged rudder and bow thrusters for increased maneuverability.

DNV GL and Shanghai Merchant Ship Design & Research Institute (SDARI) introduced the Green Dolphin 575 concept design for a handymax bulk carrier. The design builds on the success of the handy-size Green Dolphin 38 for which around 80 orders have been placed with the major share to DNV GL class. Green Dolphin 575 aims to be fuel and energy efficient, robust and reliable, operationally flexible and able to meet current and future environmental regulations. It uses technologies that are already available for commercial use, so it can meet ship owners’ current needs in tight market conditions.

A sail power concept that is being developed by a consortium of five key players in the global shipping industry, could revolutionize the way tomorrow’s vessels carry goods across the world’s oceans. The new concept, known as the Auxiliary Sail Propulsion System (ASPS), uses fixed wing sail technology whereby two 35 metre high masts installed on the deck of a vessel will each have three aerodynamic wings fitted. The masts or rigs rotate automatically to exploit the power of the prevailing wind and, as the speeds and angles of the wind change, the system develops more power allowing reductions in engine power to be made in order to achieve the same speed and so maximize on fuel saving. 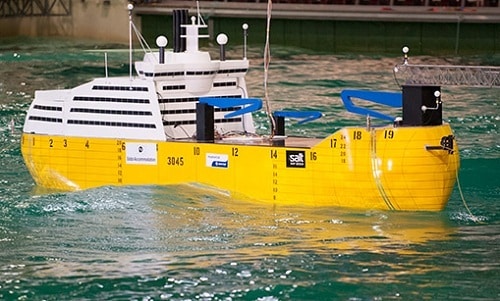 A hotel ship concept with built-in waves has been developed  to reduce the effect of rolling of the vessel. The roll damping is achieved using tanks integrated into the bottom and sides of the hull – called “U-tanks” because of their shape. The tanks are filled with water which is set in motion in opposing phase to the wave forces acting on the hull. Read more here. 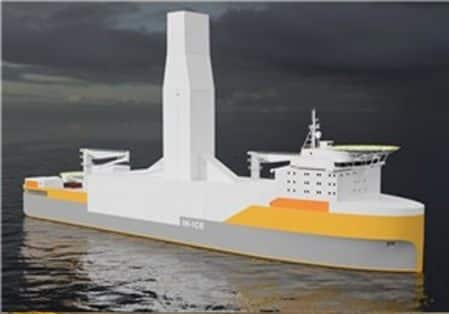 Inocean has developed an Arctic Drillship – based on the companies’ modern and effective INO-80 concept named IN-ICE. The ship is completely enclosed and winterized, is environmentally friendly, and has enhanced logistics/ storage facilities. The ice class is for a substantially extended drilling season for a large part of the Arctic – with a PC-4 ice class.

Vindskip is a merchant ship concept designed by the Norwegian designers at Lade AS. The eco-friendly ship concept aims to harness the power of wind to achieve fuel savings of 60 percent while reducing emissions by 80 percent. Unlike any other shipping concept launched until now, the Windship utilizes a unique hull design, a symmetrical airfoil design inspired from the Aerospace industry. 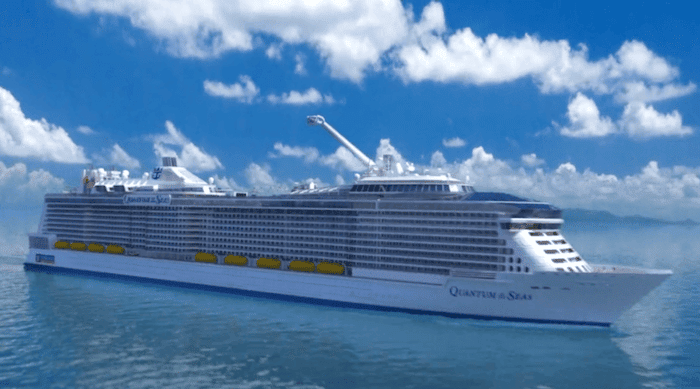 Royal Caribbean announced the development of its newest class of ships Quantum class. The groundbreaking Quantum–class ships will debut new unprecedented features, such as RipCord by iFLY, the first skydiving experience at sea; the North Star, an engineering marvel that transports guests more than 300 feet above the ocean; transformative venues, such as The SeaPlex, the largest indoor sports and entertainment complex at sea with bumper cars, roller skating and more; and the cruise line’s largest and most advanced staterooms ever, including the industry’s first-ever Virtual Balcony staterooms, which offers expansive, real-time views of the ocean and exciting destinations for interior staterooms. 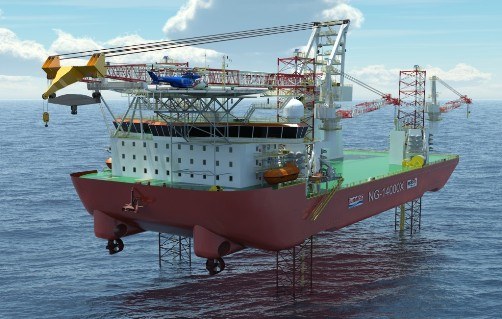 Seajacks entered into a contract with Samsung Heavy Industries to build the world’s largest and most advanced offshore wind farm installation vessel. The vessel has been specifically designed to meet the demands associated with working UK Round 3, Scottish territorial waters and the other North West European markets. Seajacks also has options for the construction of an additional two units. Read more here.

Damen Shipyard unveiled a completely new Wind Farm Service Vessel (WSV) to support and accommodate turbine maintenance crews at sea and allow them to ‘Walk-to-Work’. After industry-wide consultation, the vessel has been designed from first principles to provide on-site work facilities and accommodation for 45 maintenance personnel plus 15 crew for voyages of up to one month. Read more here.

Navigator has entered into a contract with Jiangnan to construct a 35,000 cubic meter gas carrier for delivery inApril 2016. This vessel will be the largest ethane gas carrier on the market enabling efficient transportation and specifically designed in anticipation of large scale exports of ethane becoming available from surplus US shale gas production and the desire by international petrochemical companies to diversify their feedstock supplies with low cost US ethane. Read more here.

Are we missing anything? Let us know in the comments below.

Ships Without Skippers : Researchers Believe Unmanned Vessels Are The Future