A car carrier had been loaded, not with cars but with bundles of timber. These were stowed on decks five and seven, the only decks allowing forklifts without height restrictions. The remaining decks would remain empty. This was just the second voyage for the Chief Officer (CO) in a Pure Car Carrier.

A pre-sailing calculation was made on the stability computer but the drafts as visually checked were found to be different from those calculated (actual forward draft 8.850 but calculated 8.256, actual aft draft 8.850 but calculated 8.460). The CO went back to the stability computer and adjusted the cargo weights to see if the drafts as seen would affect the final GM. He was satisfied all was safe and the vessel sailed.

During the sea passage ballast tanks five port and starboard were being used as heeling tanks; there was no ballast exchange. During the voyage, a small heel developed. The CO decided to do a five-minute transfer between the heeling tanks. The next day, the swell was increasing and coming from the stern. Over the next few hours, the weather worsened with six to seven-meter swells from the port quarter. 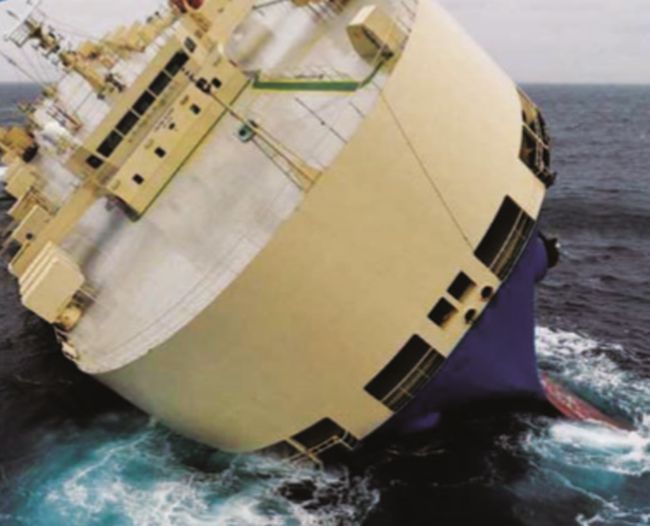 The Master ordered a reduction in engine rpm and a switch to manual steering. In the afternoon of the same day, the vessel rolled heavily to starboard, then back to port and again to starboard, a roll of about 30°-40°. A loud noise was heard from the cargo decks. The helm was put hard to starboard but the vessel did not respond. The angle of list now made moving on the bridge almost impossible. A MAYDAY message was sent and the Master activated the GMDSS distress signals and then the abandon ship alarm. All crew were ordered to move to the port upper side deck.

Fire hoses were extended and attached to railings to help crew move to the port side and don their immersion suits. Both the port liferaft and the lifeboat were lowered but both were pushed to the ship side due to the heavy list, making it dangerous to embark through the vertical ladder. Finally, helicopter evacuation was arranged and crew were disembarked by air. A few days later the vessel was towed to safety. The official investigation found, among other things, that cargo weights were about 29% greater than those declared by stevedores, contributing to a reduction in real GM. Also, more ballast was used than had been estimated, so GM was again less than calculated.

Calculations were not efficiently supervised or followed up and no arrival calculations were considered. The CO and Master appeared to pay little attention to the importance of stability calculations since they were confident of the stability of the ship based on similar conditions in the past. However, conditions on this trip were not in fact similar to those in the past because this time bunkers had been kept to a minimum in anticipation of dry dock.