A ro-ro ferry had just left berth and was on a heading of approximately 330° in order to drop the pilot on the port side so that he would be sheltered from the prevailing north-easterly wind. Before the pilot disembarked he apparently warned the Master to pay attention to the nearby shoal but the Master did not recollect this advice. The vessel’s voyage plan took it some distance away from the shoal. Port access rules also specify that such vessels as the ro-ro must pass at least at 1.5nm to the north-east of the lighthouse near the shoal. In fact, the ro-ro was not following the voyage plan, and passed only 0.33nm from the lighthouse.

Once the pilot had disembarked, speed was increased but the heading was kept at 330°, bringing the vessel over the shoal, indicated as having a depth of 6.5m. The vessel was drawing 6.49m and was now making over 16 knots. Some vibrations were felt and, as the vessel continued its voyage, crew investigated but found no immediate evidence of water ingress. 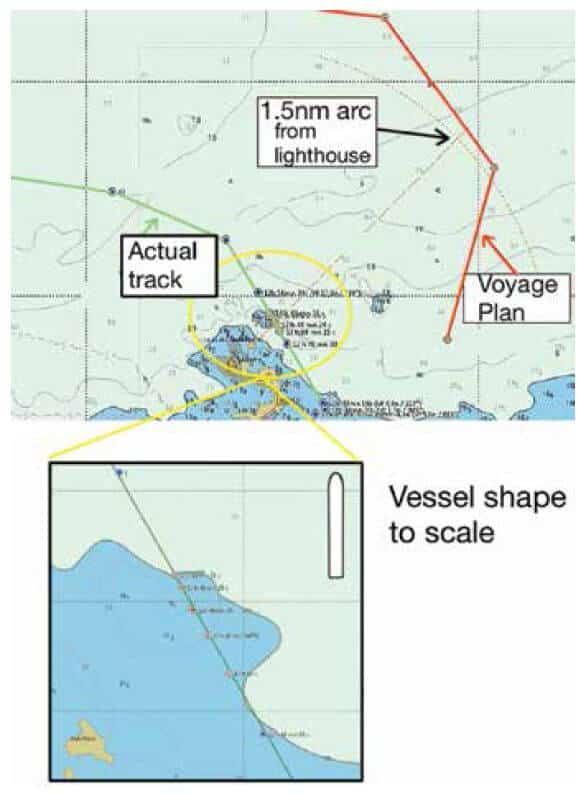 The vessel made several more local voyages over multiple days with passengers and vehicles before an underwater inspection revealed bottom damage that was eventually linked to the earlier vibrations.

OneOcean Launches The Next-Generation Of Its Voyage Planning Platform