A small dry cargo carrier was en route in a vessel traffic services (VTS) controlled restricted waterway and, because of her size, was without a pilot. This was the first time the Master had navigated this section of the waterway.

At 05:20 the vessel reported to VTS at a calling-in point at which time the VTS gave information on expected traffic. The Master started his watch at 06:00. At about noon, with both the Master and chief officer on the bridge, the vessel arrived at a bridge where extensive maintenance work was in progress on the fendering.

As the vessel approached the bridge, she was conned towards the port side of the channel to line up the passage under the bridge. The speed was about nine knots, despite a speed limit of five knots that should have been observed at this point.

The Master stated that something appeared to happen to the steering and that they lost control over the vessel. At that point the engine was put to full astern and the vessel naturally veered to starboard (right hand propeller), colliding with the fendering. The speed of the vessel at the time of the collision was just over four knots. 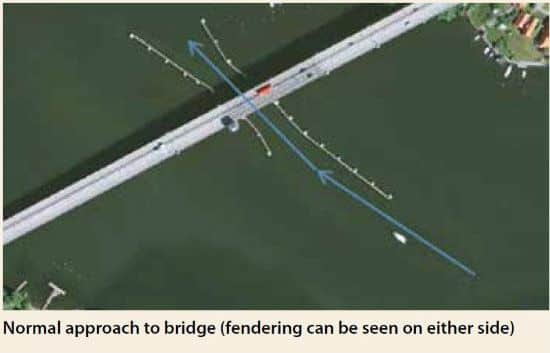 On both fenders alongside the bridge there were many people carrying out various repair work. They had seen the vessel and, from the unusual approach movements, realised that the vessel was about to collide with the repair site. While trying to avoid being hit by the vessel one person fell into the water, but managed to climb out of the water himself without being hurt. After the collision the vessel did not stop but continued on its journey.

The official report found, among other things, that:

No anomalies were found with the steering system, so inadequate shiphandling was probably a factor. A substantial decrease in engine power was applied immediately before the turn to starboard in order to reduce speed. This in turn led to an impaired steering effect since the propeller wash had by then decreased or stopped altogether. This, in turn, could have been experienced as though there was something wrong with the steering.

Editor’s note: Good ship handling is anticipation, not reaction. By arriving close to the bridge at too high a speed, the Master reduced his options and unwittingly set in motion a series of events that led to the heavy contact with the bridge fendering. Of course, as in many accidents, there are several contributing factors. In this case the facts that the Master was new to this part of the waterway and that he was unaware of the repair works and the required speed reduction were also contributory.