A small cargo vessel was on a coastal passage and proceeding at full sea speed. At midnight, the Master, one of the two watchkeepers on board, was relieved by the other officer. Soon after taking over the watch, the OOW, as was the common practice on this vessel, sent the duty lookout below.

It was later determined that the OOW fell asleep sometime after sending the lookout below. With the Bridge Navigational Watch Alarm System (BNWAS) turned off and other alarms not activated, available bridge resources that could have alerted the crew and/or awoken a sleeping OOW were silenced. As a result the vessel steamed at 11.5 knots with no-one in control on the bridge for over an hour before grounding.

All of the vessel’s crew, with the exception of the OOW, were awoken by the vessel running aground. The Master ran to the bridge, where he found the OOW still asleep. He roused him and simultaneously placed the engine control to neutral. The OOW awoke confused and was shocked to find that the ship was aground. 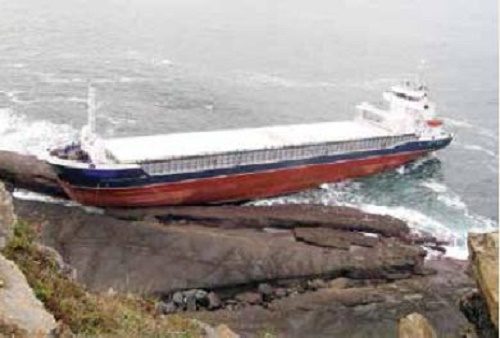 In the days leading up to the accident, the OOW had maintained the 0000-0600 watch. However, for the 24-hour period preceding the accident this routine was reversed. While the vessel was alongside he was the duty night officer, but was expected to rest from midnight (when he would normally be on watch) and work through from 0700-1200, (when he would normally be asleep). It is likely that this change of routine impacted upon his quality of sleep during the night in port. He did have over four hours rest before taking over the watch from the Master at midnight and appeared to be fit and well at that time. However, within one hour of taking the watch the OOW failed to call the pilot station, despite specific instructions in the Master’s night order book (which he had signed) and the Master’s verbal reminder to him at the watch handover. This suggests that weariness was already affecting his cognitive ability.

Findings of the report

* The OOW fell asleep on watch as a result of insufficient stimulation and probable fatigue following a change of work and rest pattern.
* There was no lookout on the bridge, as required during the hours of darkness, allowing the OOW to fall asleep unnoticed. It was not unusual for lookouts to be dismissed from the bridge during the hours of darkness.
* By including the AB/cook on the look-out duty roster, there would have been sufficient manpower for a dedicated lookout to be maintained during the hours of darkness, whilst ensuring personnel did not work excessive hours.
* The Master did not exercise his overriding authority for the safety of the vessel to delay sailing until his watchkeepers and lookouts were adequately rested.
* Navigational aids were not used effectively to ensure a vigilant and effective watch was maintained at all times.
* The vessel was equipped with a BNWAS. However, neither the ship’s managers nor the Master required that this equipment be used; it was seldom, if ever used by the bridge watchkeepers.