An accident on board a ship during rough weather threw the crew overboard while they were attempting to secure the nylon mooring lines at the aft deck. Despite the best efforts of the vessel and search and rescue (SAR) services, the two men could not be recovered.

As the vessel encountered force 9 winds with a 6 meter head sea, it was discovered that nylon mooring lines on the aft deck were becoming unsecured. These lines represented a danger to the ship if they were to be washed overboard since nylon lines will sink and could entangle the propellor.

The plan was for two crew to access the aft deck, each wearing a lifejacket and a safety harness. One end of a fire-fighter’s lifeline was attached to the safety harness securing ring and the other secured to a handrail on the external stairway platforms. It was intended that any slack in the lifelines would be manually taken up by other crew positioned on these stairway platforms.

As the two crew began their work on the aft mooring deck a large wave was shipped, the force of which washed them overboard and caused the safety crew to release their grip on the lifelines. As the two crew were washed away, their lifelines parted. 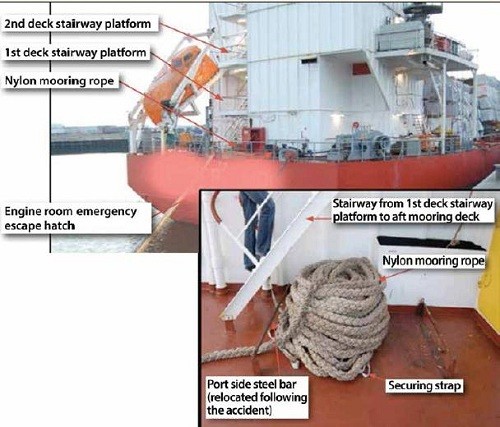 The same wave crossed the first deck stairway platform, forcing one crew member to the deck and causing another’s lifejacket to inflate. Despite the best efforts of the vessel and search and rescue (SAR) services, the two men could not be recovered.

1 No heavy weather checklist was available and none was required to be completed as part of the vessel’s safety management system.
2 Previous occurrences of the aft mooring ropes coming loose had not been formally recorded, possibly because there had been no adverse consequences.
3 The loose nylon mooring rope presented a significant risk of it fouling the vessel’s propeller owing to its inherent tendency to sink.
4 The need for a designated enclosed means for stowing the coiled aft mooring ropes had not been recognised.
5 The vessel’s safety management system contained no detailed requirements with regard to sending crew on deck in heavy weather.
6 The crew possibly underestimated the potential wave height that could have been expected in the prevailing weather conditions.
7 No designated lifelines were provided on board for use in sending crew on deck in heavy weather.
8 The crew overestimated the strength of the fire-fighter’s lifelines and their ability to manually control their loading in the prevailing conditions.
9 The strength of the fire-fighter’s lifelines was insufficient to withstand the loading exerted on them by the large wave that washed the crew members overboard.
10 Although both men had been wearing lifejackets that had inflated, neither was able to survive their exposure to the heavy weather conditions.