The deck crew were preparing the starboard pilot boarding ladder in combination with the accommodation ladder due to the freeboard of 10.2 metres.

Strong winds were blowing so the deck crew put their safety helmets away. They started to pay out and secure the pilot ladder to a height of one and a half metres above the water. After the pilot ladder was secured the crew lowered the accommodation ladder to about five metres below the main deck.

An experienced ordinary seaman (OS) then went down the accommodation ladder in order to set the railings and the lower platform. He was wearing an inflatable life jacket (manual release) and had secured himself on a lifeline with safety harness. The pilot embarkation station was properly illuminated. 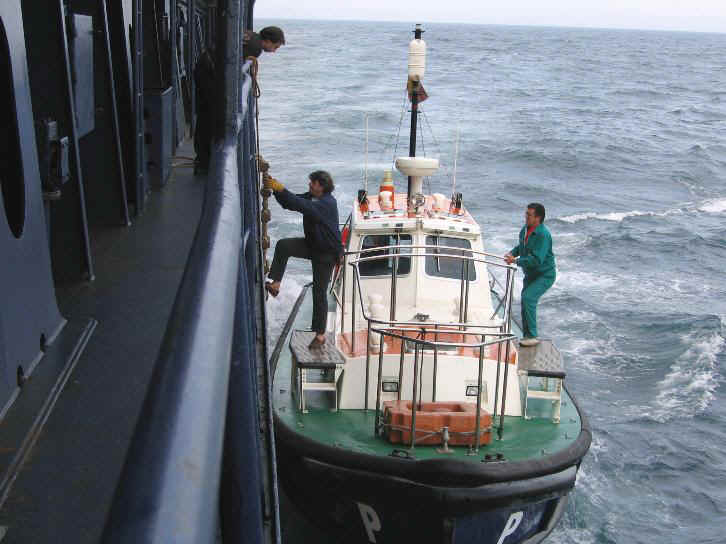 At one point, the crew on deck realised something was wrong; they then saw the victim lying in the water still attached to the lifeline and obviously unconscious. The bridge was informed and a life buoy with safety line was thrown into the water. First attempts to pull the OS out of the water were unsuccessful due to the headway of the vessel and the soaked winter clothes of the victim. Only after more crew arrived on scene was it possible to pull him out of the water a few metres and, after about 10 minutes, the victim was retrieved on board. Despite immediate artificial respiration and heart massage the victim passed away.

Lessons learned:
– The length of the lifeline was about 9.75 metres. During the accident the platform was only about five metres below the main deck; this allowed a free fall of more than four metres.
– None of the deck crew assisting had seen the OS fall as they were attending to other duties. Best practices require constant surveillance of a person working over the side on a vessel underway.
– The victim sustained head injuries and became unconscious after the fall, which hindered his rescue and survival. A helmet with chin strap could have prevented the head injuries.
– The heavy weather conditions and the fact that the combination ladder was on the windward side of the vessel increased risk for this operation. Yet, the company permit to work on deck in heavy weather states that the operation should be aborted if crew are at risk.
– Course and speed alterations may have been possible to mitigate the weather influences at the ship’s starboard side.

Editor’s note: Helmets worn with chin straps should be the norm. In this case, not only were the crew not wearing chin straps, but due to the strong winds they actually took off and stowed their safety helmets.