A chemical tanker was at anchor where her tanks were to be prepared for loading a new cargo of 50% sodium hydroxide solution, also known as caustic soda. Two crew were detailed to remove the residues of the previous cargo using a mobile pump. Both were wearing protective equipment; cotton overalls, rubberized jackets, safety boots, protective gloves, open-sided eye goggles and safety helmets.

The bosun stood at the coaming of the entry hatch to the tank to keep an eye on the work. The Master was also nearby. While the caustic soda was being pumped out, the hose parted from the pressure side of the pump (red dotted circle in photo), spattering one crew member with the caustic solution. A small quantity of the product also entered his eyes. The victim was immediately taken to his cabin where his eyes were continually rinsed with water until the arrival of rescue services. The victim was transported to the hospital and treated as an in-patient for ten days.

Given that contact with only a 5% sodium hydroxide solution can cause extremely severe chemical burns, the protective equipment used was inadequate for the planned manoeuvre using a 50% solution. The IBC Code states that protective clothing made of chemical-resistant material as well as tightly fitting eye goggles and/or face shields are needed for caustic soda. The cotton overalls and eye goggles used, which were open at the sides, did not meet these requirements. 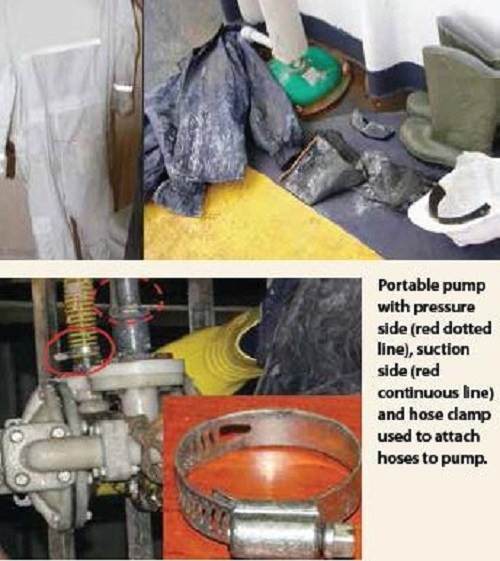 There was a substantial lack of training with respect to the crew’s ability to handle cargo on a chemical tanker.

The safety awareness of the ship’s command, deck officers and deck crew was not sufficient for safe and proper handling of the sodium hydroxide solution. The Master, tank cleaning team and bosun were all near the forward part of the vessel, yet none took action with regard to the inadequate safety clothing of the tank team.