On board a laden bulk carrier on passage, the engine room staff were holding a meeting before starting work for the day. At this time, in anticipation of larger electrical sea load, auxiliary engines (A/E) Nos. 1 and 2 were on parallel load-sharing configuration.

All the engineer officers were present in the engineering control room (ECR) and the engine ratings were carrying out their assigned tasks, when they noticed flames between the two running generator engines. The fire alarm system activated and the engineers immediately tripped the main supply breakers on the switchboard, stopped the auxiliary engines and all other running machinery whilst the emergency generator came on load.

Within seconds, thick black smoke seriously reduced the visibility in the engine room, forcing all the staff to evacuate the machinery space. While the crew mustered, the ventilation trips, flaps and quick closing valves were operated, and the E/R was battened down. The Self-Contained Breathing Apparatus (SCBA) team #1 then entered the space and extinguished the fire with portable and semi-portable extinguishers. The crew continued to monitor the space from various locations for hot spots. A few hours later, they made another entry to verify that the engine room fire was completely extinguished. 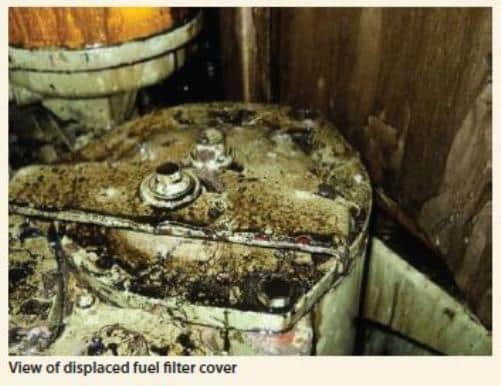 Subsequently, after carrying out all the appropriate operational safety checks, Aux. engine #3, (located on the lower platform), main engine and other machinery were re-started and the vessel resumed her passage.

1. Sudden shearing off of one of the three bolts that secures the lubricating oil filter cover of A/E #2. The cover was displaced and lube oil under pressure splashed on to various hot components of both running generator engines and ignited;
2. Although the engineers reacted correctly and quickly stopped both generator engines, the lube oil priming pumps continued to operate, powered by the emergency power source. This resulted in the unintended spill of all the lube oil in the sump of the A/E #2 engine, which fed the fire; 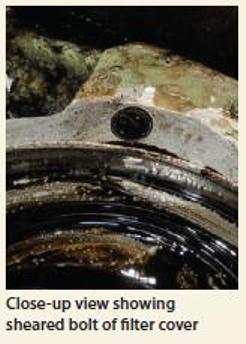 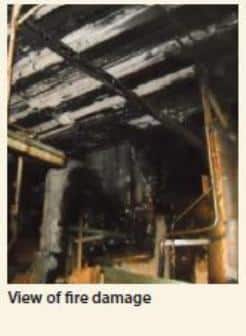 3. Suspected improper tightening of the filter cover bolts and lack of proper inspection, especially as it is known that these fittings could be subject to wear down or loosen due to vibration / internal pressure;
4. Presence of combustible material such as felt filter covering the engine turbocharger (T/C) blowers, plastic light fixtures that added to the intensity of the engine room fire.

1. A special safety meeting was held on board to emphasise the importance of carrying out risk assessments, tool box meetings and discussing all the anticipated risks when allocating jobs for the day;
2. Anti-splash sheaths, guards for filter covers and extra securing arrangements for cover bolts were fabricated and fitted for all lube oil pipes and filters on generator engines; even though these are not formally required;
3. Renewal/cleaning of the filters and other critical parts of the generators will be supervised by the senior engineers;
4. Restoration of all engine room areas affected by the fire (coating renewal, renewal of damaged electrical wires and other associated fittings) was commenced immediately;
5. All auxiliary engines were made fully operational and successfully load-tested.

1. The superintendent will review the fifitting of additional screen shields between both auxiliary engine generators and at other strategic locations on the lube oil / fuel oil low pressure piping systems during the next shipboard visit. The fleet will be advised of decisions taken;
2. Staff on board all vessels in the fleet encouraged to carry out risk assessments for all tasks, considering ‘what can happen’ scenarios; and maintain a high level of situational awareness;
3. This incident is to be discussed as part of the on-going safety campaign;
4. The vessel will be visited by the superintendent at the next port to review the preventative actions put in place and to brief the onboard staff, as appropriate;
5. The possibility of such fires occurring on other vessels in the fleet is being reviewed by the superintendents and appropriate safeguards are being put in place on each vessel.