Burns and injury caused by steam are known to be more severe than those caused by hot water. Accidents on ships because of steam leakage are very common. However, when such incidents lead to death, it’s a matter of great concern.

In this article, we have described a real life accident wherein one seafarer lost his life because of steam leakage and other was severely hurt.

The incident took place on a cargo ship where economizer and auxiliary boiler were two separate units. One of the flanges in the line from boiler to economizer was leaking because of a broken gasket. This was noticed just before the ship’s arrival at the port.

When the ship was berthed, the boiler was stopped and job of changing the leaky gasket was assigned to ship’s 3rd engineer and fitter. 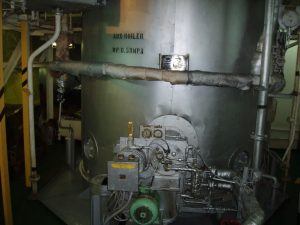 The leaky flange was at a higher level and thus a platform was rigged to reach the flange and carry out the necessary work. In the meantime, the circulating valve on the boiler for the economizer was found leaking which lead the boiler pressure drop to 0.5 bars.

The fitter wore a helmet, safety shoes, and a safety belt. The belt’s safety line was tied to a nearby bracket. Both 3rd engineer and fitter were on the platform to change the defective flange.

Unfortunately, while changing the flange, all of a sudden a mixture of hot water and steam started leaking through the flange. The steam jet of hot water/ steam hit the fitter on chest and stomach.

The 3rd engineer managed to move away from the jet of hot water and steam; however, the fitter was not able to move quickly as he had buckled the belt to a bracket. By the time he could unbuckle the belt, it was already too late and the damage had been done.

Later the leakage was stopped, and the fitter was brought down. The fitter was severely burnt and in a state of shock. His boiler suit was badly stuck to his body because of severe skin burns. The 3rd engineer also got burns on one of his leg and arms. Both were taken to a hospital ashore.

It was later revealed that the fitter’s lungs and kidney were severely affected because of the steam burns. The fitter died after 3 months. The 3rd engineer was also badly affected and had to stay in the hospital for around 3-4 months. Fortunately, the 3rd engineer survived.

This is an extremely unfortunate accident which could have been averted if proper precautions had been taken before opening the flange. Dealing with steam on board ship is a dangerous task, and seafarers must take all the necessary measures that are required before getting involved with such work.