A vessel was berthed and completing the last day of a nine-day technical stop. The engine room crew were preparing to bring some steel plates to their storage location in the engine room. A toolbox meeting was conducted with all crew members involved, emphasising the importance of completing the job safely. The plates needed to be stored and secured at a location that already contained several other metal plates.

The fitter began the job by unscrewing the securing bolts of the angle bar at one end of the plates, then moved to the other end. The moment he removed the last screw of the securing angle bar, the steel plates shifted towards him. The fitter jumped back in a reflex reaction and hit the lower railing bar behind him. His impact on the railing caused it to bend and fail. As a consequence, the fitter fell to the engine room lower platform about 10m below. Although the victim was quickly transported to a local hospital he nonetheless succumbed to his injuries and was pronounced dead. 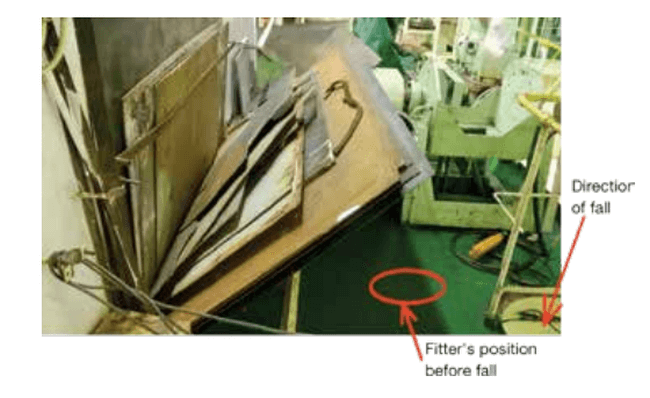 The railing that failed was the removable type which, when removed, allowed movement of larger parts lifted by the ER crane. The company investigation found that although a toolbox meeting was supposedly held before the job being performed, the risk of shifting steel plates was not specifically mentioned during the meeting.