A small coastal trader was underway in darkness and calm seas at a speed of almost 8kt. There was a change of officers on the bridge. At the time, the vessel was on autopilot ‘track mode’ steering.

This mode applies the necessary helm to follow the track selected on the ECDIS. The relieving OOW deselected track mode steering and switched to ‘course to steer’ mode, setting the heading at 279°.

The OOW then sat in the chair on the port side of the bridge and started watching music videos that were being streamed to his mobile phone via wi-fi. About two hours later, the OOW looked at the radar display and realized that the vessel was to port of the planned track. 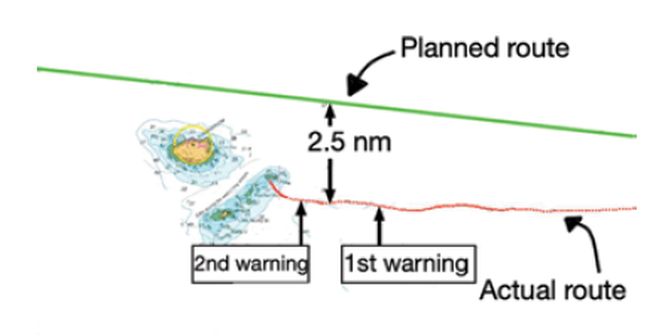 On the radar, he also observed two small islands ahead of the vessel and decided to proceed between them, more or less on his present course, with a plan to alter course to starboard afterward to regain the planned track.

About 30 minutes later, a local coastguard officer warned the OOW by VHF radio that the vessel was running into danger. The OOW acknowledged the call but did not change the course. Some nine minutes later, the local VTS officer, having observed that the vessel was still heading into danger, called the vessel and issued a second warning. During this conversation with the VTS officer, the OOW reduced the range scale on the port radar and added a chart overlay to the display. He then realized that his plan to pass between the two islands was unsafe because there was a shallow reef between them. He quickly selected hand-steering and put the rudder full to starboard in an attempt to steer away from danger.

The vessel grounded nonetheless at a speed of 7kt. Seconds before grounding, the ECDIS depth alarm sounded as the vessel crossed over the 10m depth contour. Some three days later, after a partial cargo discharge, the vessel was refloated and brought to a safe haven.