While underway a main engine low fuel pressure alarm sounded on the bridge. The crew member on watch entered the unmanned engine room and identified a high-pressure fuel leak spraying on the port engine’s turbocharger. There was also a large quantity of diesel fuel in the bilge.

The Master arrived on scene just as the fuel ignited and began a fire. He attempted to extinguish the fire using a portable fire extinguisher, but without success. He activated the general alarm, secured the hatches, had crew members secure the ventilation dampers and closed the remote fuel shut-off valves to the engine room. The fire then quickly self-extinguished. 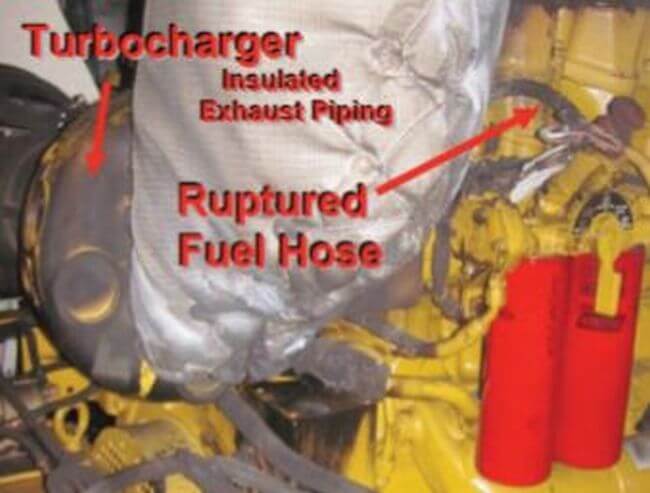 The investigation identified the source of the fuel leak as a rupture on a flexible fuel hose connected to the fuel filter assembly. The fuel filter assembly and its components were installed relatively close to the turbocharger on the inboard side of the engine. The heat radiating from the turbocharger components was very high and probably led to the degradation of the rubberised hoses nearby. However, the installation was in accordance with the manufacturer’s marine engine manual.

Real Life Incident: Steering Gear Room Flooded Due To Improper Communication
Want to share your tips and advice? Got questions? Visit the community forum to ask questions, get answers, meet people, and share your tips!