An oil tanker, fully loaded with crude oil, was berthed and ready for discharge. Prior to discharge operations a safety meeting was conducted and the ship-shore safety checklist completed between the vessel and the terminal. Discharge commenced with three cargo arms. The deck, manifold and pump room were closely observed for any leaks. Discharging pressure was then increased without any signs of abnormalities.

As discharge continued, a deck watchman became aware of a black stain on the top of one of the shore cargo arms, although he did not see any actual leakage. He informed the cargo control room and the information was passed to the fire and safety watchman and the shore terminal. 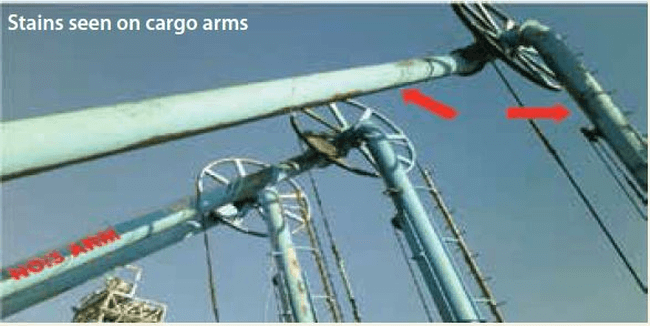 Later, terminal staff arrived on board. With vessel staff, they tried to identify the reason for the stain. Shortly thereafter it was observed that oil was dripping from the shore cargo arm to the deck and manifold drip tray. Terminal staff stopped the leakage by pulling the vacuum relief valve handle. The discharge operation was not stopped, because everyone was convinced the source of the leak had been corrected. The vacuum relief valve and all shore cargo arm systems were kept under close scrutiny until the end of discharge operations with no further leaks observed.

During further investigation and checks by the terminal staff on their systems some oil was spotted on the water between the vessel and shore; some cargo had dribbled down from the shore cargo arm during the leakage from vacuum relief valve, probably less than one litre. The oil residue was quickly cleaned by shore staff.

The cause of this incident was the leaking vacuum relief valve located at the top of one of the loading arms, an area not easily visible. Apparently, this deficiency had been known to exist by shore authorities. Some stains were also seen on one of the other shore arms, though no actual leakage was observed there during cargo operations.