Investigation report into marine accident including what happened, safety lessons and recommendations made:

On 18 February 2015, while on passage from Belfast to Skogn, Norway the general cargo vessel Lysblink Seaways ran aground at full speed, near Kilchoan, Ardnamurchan peninsula, West Scotland. 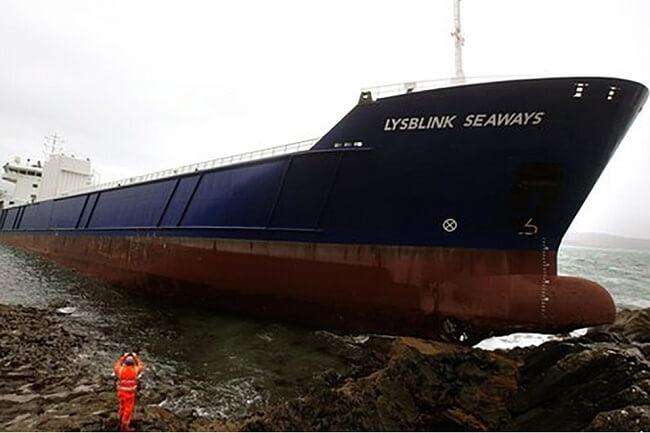 The vessel remained on the rocky foreshore for almost 2 days during adverse weather. This resulted in material damage to its hull and the double bottom was breached, including some fuel tanks, resulting in 25 tonnes of marine gas oil entering the water. After the salvage the vessel was declared a constructive total loss and scrapped

The MAIB investigation found that the officer of the watch (OOW) – who was the sole watchkeeper – had become inattentive due to the effects of alcohol consumption. The bridge navigational watch alarm system (BNWAS) had not been switched on and an off-track alarm on the Electronic Chart System (ECS) had been silenced. Although a radar watch alarm had sounded every 6 minutes, the OOW was able to reset the alarm without leaving his chair.

The vessel’s owner, DFDS A/S, has taken action to enhance compliance with the SMS on sister vessels, with particular emphasis on control of alcohol consumption and bridge resource management.

In view of the actions already taken, no recommendations have been made.