A boat or ship, which is used to catch fish (Piscary) in lake, sea or river, is referred to as Fishing Vessel. Fishing may be deep-sea fishing or freshwater fishing.

Larger fishing vessels are required for deep-sea fishing as it is heavy output fishing and rather difficult as performed in oceans, whereas smaller fishing boats for freshwater fishing.

Deep-sea fishing is an arduous task because to catch the desired sort of fish one has to face the complexity and uncertainties of oceans.

Commercial fishing is responsible for availing a large quantity of food for many countries around the globe, but this is done with the help of deep-sea fishing vessels and rather a difficult job to do, due to uncertainties of big oceans.

Related Read: A List of Unique and Interesting Marine Careers

Recreational fishing vessels are the vessels which are not dedicated to fishing alone; rather fishing is done through these boats for fun and amusement. These vessels may range from both small to large vessels.

Fishing vessels are indispensable to maritime operations. They fulfil a vital need for reconciling demand with supply in the fisheries sector so much so that in their absence, a very simple yet equally essential activity would come to a standstill.

As is in any domain, even in the aspect of fishing boats, various evolutionary methodologies have come to be adopted over the course of time.

Presently there are numerous types of fishing vessels that are in operation in the maritime industry, each with a purposeful quality unique to its own.

Before the standardization in the 1950s, the design of fishing vessels varied from region to region; traditional vessels were made up of wood but due to high maintenance cost and smaller life they had gone obsolete and other safer and durable materials are now in use for the production of fishing vessels.

Rafts, Dugout canoes are regarded as oldest fishing vessels and they were made from tree bark or tree logs and stones. The oldest boat belongs to Neolithic Period (about 7000 to 9000 years ago), revealed the excavation at Kuwait. These early vessels had less capability and durability; rather they had the floating capability but were not employed for long distance travels.

At that time vessels were used only for hunting and fishing. After these simpler boats, around 4000 B.C. the first multi-oarsmen long and narrow vessels were developed by Egyptians and carried out further advancements to achieve much faster, larger and suitable for long distance travel vessels. Simultaneously some other countries also started developing innovative vessels for fishing and trade.

The Dutch, in the 15th century, developed a drifter that turned out to be a blueprint for the later developed European fishing boats. It was a bus like a ship which was about 20m long used for fishing. In the 17th century, dogger was developed by the British. Doggers were little smaller than herring bus but capable of carrying tonnes of fish at a time.

The trawler, the modern fishing vessel, was developed in the 19th century at Brixham harbour. It was developed by modifying the dogger developed in the 17th century; their innovation entitled Brixham with the title of ‘Mother of Deep-Sea Fisheries’. This was the first time at which ocean fishing became possible and the design started becoming prevalent around the whole world.

The development continued and with the passage of time, there came a takeoff point for fishing vessels with the advent of steam.

The vessel, eventually made, ran with steam and was made up of steel hulls. Their further development results in stern trawlers and electronically aided commercial fishing vessels that we use today. Development still goes on hand in hand with the advancement of technology.

Trawlers are one of the common forms of fishing vessels employed. As their name suggests, these vessels have trawler nets that are suspended by aiding equipment and trailed under the surface of the water at the required deepness to haul and trap the fishes.

Trawler vessels are employed to catch a wide array of fishes and in almost every country across the world.

Generally used for small scale fisheries, in some cases, trawlers can also go deep sea fishing. The fishing nets are suspended from poles and these poles pull the net to a specified depth. The material used to make the net is nylon, which does not let the net to go rigid and imparts flexibility.

The bottom of the nets is connected with a heavy chain so that the net can be dragged down to the bottom of the sea and collect as many fishes as possible. Extra power should be applied if a heavy load gets stuck at the net bottom.

Winch crab arrangement is provided to the drum through which these nets can be wrapped around the drum easily when not in use.

These trawlers are further sub-divided into two categories namely Stern and Cutter.

These trawlers are equipped with refrigeration system with automation and their engine power depends on the load of work to be done by the trawlers.

Refrigeration system maintains the optimum temperature for the caught fish. Some advanced modern trawlers have inbuilt fish processing facility on the vessel, which directs the fish to market as they reach the port.

These are highly effective fishing vessels with nets which cannot be pulled against the ocean water, but instead, fish swim to the net and get themselves caught. These nets can be a kilometre long.

These non-trawling vessels are subdivided in the following categories:

This type of non-trawling vessels is generally employed to catch pelagic species. Pelagic species of fish are the species which are found near the water surface. Seine nets are used in this type of fishing vessels. These nets are equipped with traps that close the net from below when the fish shoal enters it. A bow thruster is sometimes provided in a seiner which enables the vessel to make circles around the shoal. 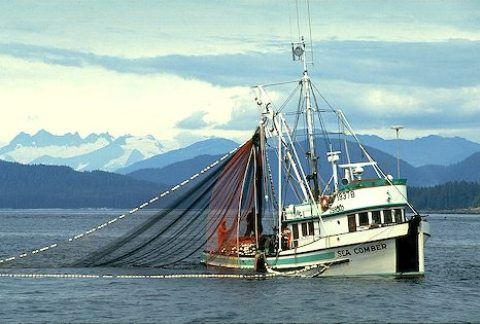 At first glance, the seine fishing nets resemble a huge floating device, but once the fishes enter into the net, the lower portion of the net closes down, thus essentially trapping the fishes.

These fishing boats are aided with state-of-the-art technological gadgetries to enable high returns of catch.

These are the vessels equipped with multiple long fishing lines in series and each of the lines is then connected with hundreds of baited hooks.

The branch line that hangs these hooks to the fishing lines is known as snoods. The number of crew members, size of the ship, automation facility are the factors that determine the number of fishing lines to be provided in the vessel.

However, the major difference between the longliners and the trollers is that while the latter employs numerous fishing cords, the longliner vessels essentially employ just one really long fishing cord containing around 1,000 lures. 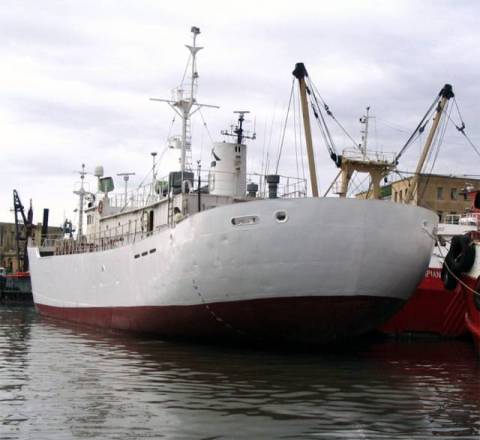 The fishing cord is deployed from the vessel’s tail-end and automated systems help the vessel stay in place and spool the fishes to be consequentially stored.

It is an automated fishing vessel equipped with a special platform having poles and lines. These lines are further connected with live baits to catch tuna (saltwater fish).

Tune clippers equipped with an automatic swinging mechanism that swings the Tuna (when caught) into tanks. In case, if tuna is caught large in size, then fishermen are required to unhook the tuna.

The varieties of fishing boats that employ the gill net system of fishing are referred to as gillnetters. Gillnetters can be both manually operated or technologically aided for better fishing results. 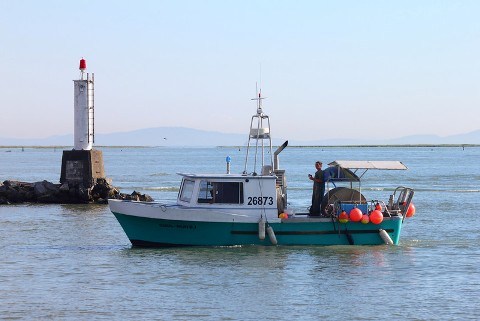 Fishing boats that are mainly and extensively utilised to fish for crabs are known as crabbers. These vessels are also alternatively referred to as the ‘fish trap’ boats as they come equipped with specific entrapping aids to catch crustaceans. 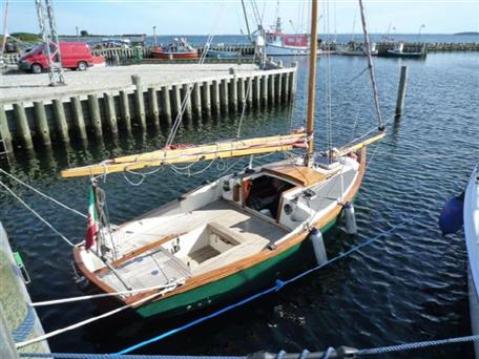 In order to haul these trapping aids with the catch, these vessels have automated windlasses equipped.

Drifters refer to those fishing boats that make use to the special drift fishing nets to haul and trap the fishes.

The fishing boats which uses special drift fishing nets (the nets which when dropped in water fell like long curtains) for dragging and trapping the fish referred to Drifters. 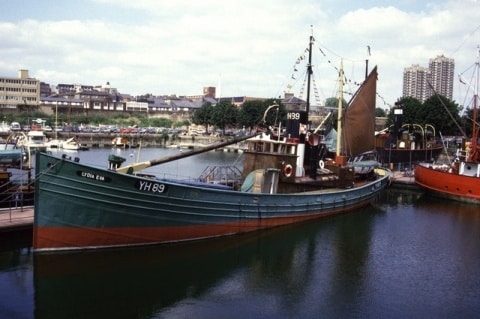 The nets, when thrown into the water, fell like drapes and were mainly employed to capture herring fishes.

The factory ship is like floating fishing, processing, and preserving factory at the sea. 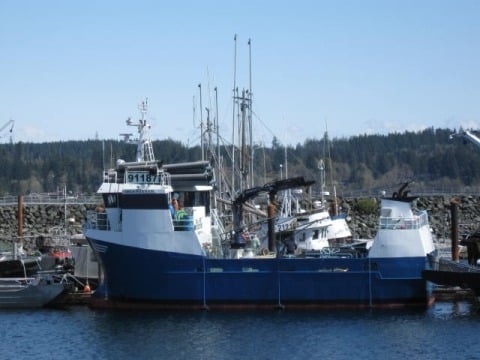 The factory ship does all those functions that are carried out once the fishes are brought to the shore. Know more about the factory ship.

Read about the world’s largest ship for fish processing.

Most of the above-listed fishing vessels not only have numerous sub-classifications under their broader head but are also used for fishing certain specific fish varieties. However, the most commonality between all of the above types of fishing vessels is that these fishing boats are extensively employed to suit the needs of the mercantile-based fisheries domain and not just a micro-level operational need.

On an estimate, the number of total fishing vessels in the world in the year 2016 was about 4.6 million in which the number of fleets owned by Asia was the highest. After an increase in a number of vessels from the year 2014 to 2016, as per the estimate of 2016 Asia alone owns 3.5 million vessels which makes about 75% of total fleets of the world.

Strength of fleets of Latin America and the Caribbean fleets increased from the year 2014 to 2016 as Asian Fleets; whereas there observed a decline in a number of fleets owned by Africa and North America. But an actual number of fishing boats cannot be estimated precisely as the fishing boats cover recreational fishing boats, their size ranges from dinghies (small) to charter cruises (large).

Engine-powered vessels throughout the world were estimated to be 2.8 million in the fishing year 2016. The number of motorized vessels declined from its share of 64% of total fishing vessels in the year 2014 to 61% in 2016.

Distribution of motorized fleets is uneven around the globe; in which major share of about 80% is owned by Asia which makes up to 2.2 million and Africa stood second with 153000 vessels. Europe has more motorized fleets than to another sort of vessels but it’s fleet capacity kept on declining since 2000.

Future Of Fishing Vessels And Conclusion

Fishing Industry alone employs 1.5 crores people of the country. Indian share in fish production is only 4.2% whereas of China alone is too high as 69%. To maintain Indian fishing industries’ share in the global fish production to an adequate value, fishing vessels of India need to be upgraded and equipped with better facilities.