You are here: Home › Marine Navigation › How Bow Thruster is Used for Maneuvering a Ship?
TwitterFacebookLinkedInPinterestBuffer

Handling a ship in currents, wind and tide is always a tricky affair. All these three factors can laterally shift the vessel from its course. A ship’s pilot has to keep an eye to these effects and constantly take remedial measures for safe navigation of the ship.

Berthing in heavy wind and tide situations is generally assisted by tags – be it a towing tug or a checking tug or a tug that imparts athwartship force to counter lateral drift. These are additional to the already existing ship’s engines, rudder and thrusters (if installed).

Now at any given time, the berthing speed is always on the lower side. It is best to keep it less than two knots under most circumstances. Bow or stern thrusters, which impart lateral or athwartship forces, are effective only when the speed is on the lower side. They dampen the impact of the vessel when it falls on the pier or berth.

When the bow is falling heavily on the jetty, the bow thruster is run to port or starboard, as the case may be so that the fall is restricted and lines are passed safely with the heaving lines, jolly boat or motor boat from the bow. 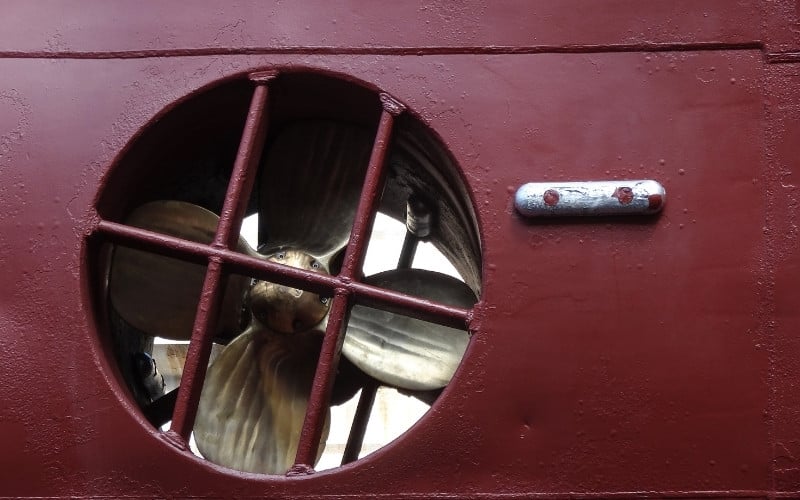 When a ship is taken astern, which a ship’s pilot normally does when he approaches the jetty, the ship’s stern goes either to port or to starboard. Consequently the bow goes in the reverse direction i.e. starboard or port. This effect is called canting.

For a vessel with a right handed propeller, i.e. for a propeller that rotates clockwise while the vessel goes ahead, the stern cants (swings) to port and the bow to the starboard. The reverse happens for a left handed propeller. At this stage the bow thruster comes to play. The bow in the first case is given to port so that its swing to starboard is restricted while in the second case it is given starboard.

One might ask why the bow and the stern swings while the ship comes astern? This is because of the transverse thrust and screw race effects which will be dealt with in another chapter.

In areas of higher wind speed and ships having higher LOA and GRT, a more powerful bow thruster (BT) is required.

Bow thrusters (BT) are generally installed to replace the use of tugs, which are hired by the vessels coming to port. It reduces the operating cost of the vessel. But in some ports, hiring a tug is mandatory. In that case, the BTs work as additional help to the ship’s pilots.

While turning a vessel, BT plays an important part. In restricted space like in a congested dock, the vessel has to literally spin on its axis. In such case the vessel is stopped and with the help of bow thruster the bow is swung to port or starboard, pivoting the stern.

Sometimes, the stern is also rotated with the rudder and engines. But what is generally considered in this case is the vessel’s natural tendency to cant while coming astern. If the vessel has a right handed propeller, the vessel’s bow will swing to starboard, while the engine is run astern. So it is always advisable to turn on the starboard wheel as while coming astern also, the vessel will keep turning in the desired direction.

While backing down, it is however advisable to take a towing tug at the stern and use the bow-thruster as and when needed. The tug straightens the stern as it pulls and any effects of transverse thrust are thus neutralized.

Bow thruster thus plays an important role in manoeuvring of ships. But how and when it should be used depends on the experience which has to be acquired on the field.