You are here: Home › Marine Technology › What is Rollover Condition in Gas Carrier Ships?
TwitterFacebookLinkedInPinterestBuffer

In a gas carrier ship, gaseous cargo having different properties is carried in the same tank if approved by the administration. This is mainly done to help operators and owners to save transportation cost and make some more profit from the same vessel by delivering different cargoes.

When it comes to gaseous cargo, the ship owners have to be extra cautious because of the various hazards associated with it. “Rollover” is one such dangerous situation that can be generated while carrying gas cargo in large tanks.

Rollover is the process of spontaneous mixing up of a similar or two different gaseous cargos due to changes in the density of upper and lower layers level in the tank.

This happens because of the boiling off of lighter fractions from the gaseous cargo, resulting in the liquid layer adjacent to the liquid surface to become denser than the layer beneath it. When this situation occurs, stratification develops and the unstable condition relieves itself with spontaneous mixing known as rollover.

Let’s understand this phenomenon with a simple example of two different cargos having dissimilar densities loaded without mixing in a LNG tank. A layering will take place and instability between the layers will occur due to the genuine difference in the density or high concentration of nitrogen in the feed gas. 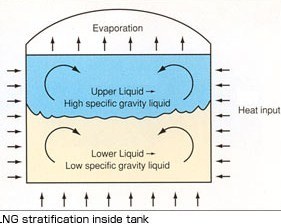 The lower layer can become less dense as compared to the upper level when the boil off is removed. This leads to evaporation causing increase in the density and decrease in the temperature near surface making lower layer less dense. This unstable situation results in rollover and sudden mixing of gases.

The various reasons for rollover are:

Both the tanks on the shore and ships are subjected to rollover, but the possibility of Rollover to take place is higher in ship tanks due to the size and capability of handling different cargoes in the same tank.

Leading Port Authorities Combine Forces In Climate Action Program
Want to share your tips and advice? Got questions? Visit the community forum to ask questions, get answers, meet people, and share your tips!