After the building of the ship is complete and before handing over it to the owners, sea trials are done to test that the ship is able to deliver the contractually guaranteed speed. The primary purpose of the sea trial is to determine the speed of the ship with reference to the RPM and the power produced for the same.

Apart from the sea trial of the hull part of the ship, the important machinery of the engine room such as boilers, auxiliary engines and the main engine are also tested. Machineries have a test record apart from the sea trial data, which is done in the manufacturing plant and is called as test bed data. It is normal to have main engine, generators, motors and pumps etc. having these test bed data.

Under the charter party the speed and fuel consumption are fixed among other things.  There is little margin for error and if the speed is not enough then there is a speed claim; moreover, if there is over consumption to maintain speed then too there is a fuel claim.

The main engine has to perform satisfactorily and give the rated power at the rated RPM within narrow but allowable limits of temperature and pressure and with correct specific fuel oil consumption.

In addition to all these the lubricating oil and cylinder oil consumption must be kept to minimum to keep the owners happy and the engine maintenance must be up-to-date to match the engine with the performance curves given in the shop trial.

There may be other parameters listed as per manufacturer. A typical performance curve for a slow speed two stroke marine diesel engine is given below. 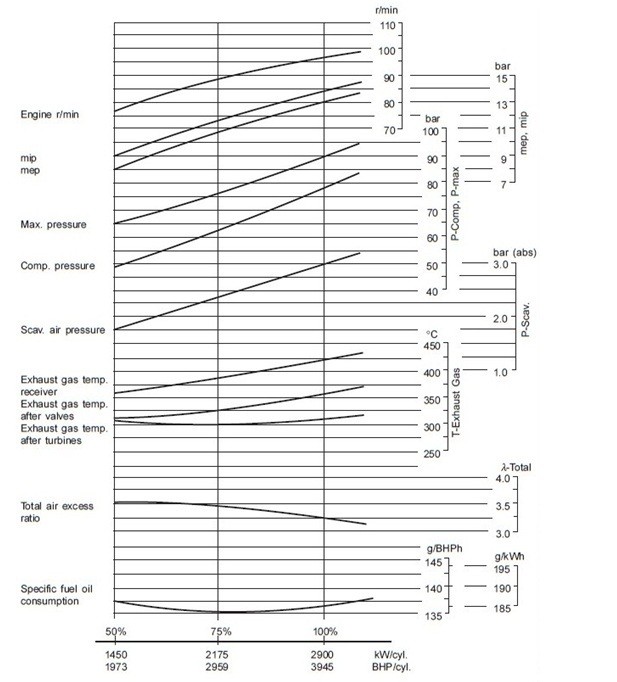 The main engine will run economically if the engine is well maintained and is run at the rated economic rating where the Specific Fuel Oil Consumption is the least. An engine is said to be performing well or well maintained if it can be safely run at the rated RPM at the rated load. For example if an engine is having a continuous service rating of 15000 BHP at 104 RPM but cannot reach the rated RPM and is developing 15000 BHP prematurely at 98 RPM, there is a loss of ship’s speed and a subsequent speed claim. It also tells that there is a problem, the ship cannot give speed, it is over consuming fuel and that the engine is over loaded.  It points to either hull fouling, damaged propeller or faulty prime mover etc.

In such cases the careful study of the sea trial data, engine shop trial data and the performance curves will help to determine the cause of the problem. 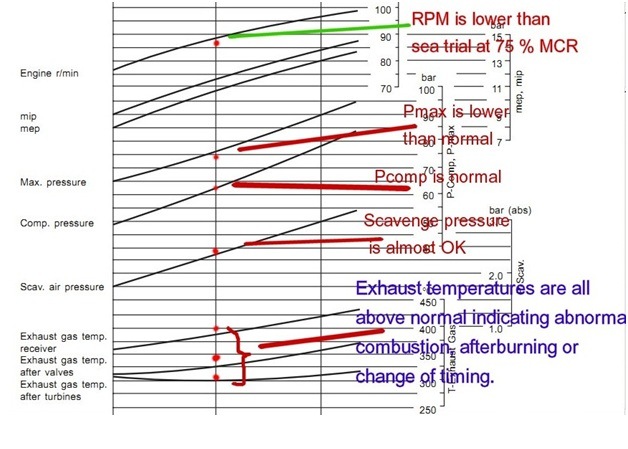 From above diagram the following points are inferred: