You are here: Home › Maritime History › 7 Interesting Facts About The Scapa Flow
TwitterFacebookLinkedInPinterestBuffer

Scapa Flow, one of the popular diving destinations in the world, is a natural harbour located off the coast of Scotland, United Kingdom.

Known for its archaeological significance, Scapa Flow holds a unique place in maritime history as it preserves many fascinating war stories underneath.

Derived from the Old Norse Skalpaflói, which means ‘bay of the long isthmus’, Scapa Flow refers to the thin strip of land between Scapa Bay and the town of Kirkwall.

During World War I and World War II, due to its strategic location, the Admiralty used Scapa Flow as its principal naval anchorage.

Thus, the water of Scapa Flow is now a historic wreck site as it has played a significant role in both the world wars which also remain as a unique underwater environment with its rich wildlife.

Read further to know about some of the most amazing Scapa Flow facts.

This historic body of water, which features about 120 square miles in area and an average depth of 30 to 40 meters with a shallow sandy bottom, is located in the Orkney Islands, Scotland.

Scapa Flow is enclosed within surrounding islands such namely Hoy, Burray, Graemsay and South Ronaldsay. Being a key harbour since Viking times, the sheltered waters have played a significant role in the region’s trade and travel, and also in the conflicts that occurred since prehistory.

Due to its strategic location, Scapa Flow acted as the naval base of the Royal Navy, carrying out a key role in both the world wars.

In addition, this body of water off the UK is one of the transfer and processing points for North Sea oil.  With the help of underwater pipeline, the oil is being carried from the Piper oilfield to the Flotta oil terminal.

Historians suggest that Scapa Flow has played its part in the battle of the Three Kingdoms, when the Royalist general James Graham moored his ship in the sheltered water in 1650, while he was in an effort to raise a rebellion in Scotland.

Meanwhile, some say that Admiralty first took an interest in the water body during the Napoleonic wars of the early 1800s. The sheltered water was then used as a deep water anchorage for trading ships before crossing the North Sea to Baltic ports.

However, the benefit of its strategic location was mostly exploited during World War I and World War II. Its position made it guarded against all the sides and provided the British army with huge leverage against its enemies.

During WW I, this harbour was mainly used as an exercise spot initially but later turned into a full-scale northern base due to the absence of any suitable spot that could be used at a short notice and also because Scapa Flow seemed a viable option.

As such, during WWII, it was readily selected as one of the most important northern bases.

3. The Scuttled German Fleet at Scapa Flow in WW-I

Immediately after the end of WW-I, about 74 German ships from the High Seas Fleet, were destined to be interned at the Royal Navy harbour at Scapa Flow while negotiations were taking place over the final decision on the fate of the ships.

Both parties, as part of the Armistice agreement, discussed a seemingly neutral point for the interning. While a final destination was never mentioned in the Armistice, Scapa Flow was the site mentioned by the British navy for the suggested interning.

The captured fleet of ships was docked close to the spot for over nine months while the details of the treaty regarding its interning were being worked out.

While Britain and the US reportedly suggested the destruction of the vessels, the French and Italians were pushing for sharing the ships.

As the decision was pending, the fleet had been opened for the public. Meanwhile, after having spent so much time waiting for suitable orders, the German commander, Admiral Ludwig von Reuter, gave orders for the scuttling of the German ships on 21 June 1919 in Scapa Flow.

As a total of 52 ships sank in front of many spectators, marking the greatest loss of shipping ever recorded in a single incident, the timely intervention of British guard ships helped saving a number of warships.

Official documents say that many wrecks were later salvaged and were towed away for scrapping, but still leaving many on the seafloor of Scapa Flow.

Admiral Ludwig von Reuter and many other chief officers were captured on grounds of the destruction of British property but later released.

During WWI, the Royal Navy had placed strong defence throughout Scapa Flow in a bid to protect the base from attacks. Several measures, including the deliberate sinking of block ships, were taken to prevent Germany from accessing the Scapa Flow.

However, during WWII, a German submarine penetrated the Scapa Flow and caused the British ships to fall back.

The Royal Navy battleship HMS Royal Oak was sunk at her moorings on 14 October 1939 after an attack by the German U-boat U-47, killing a total of 834 men.

Barrier 1, linking Mainland and Lamb Holm. It was through this channel the U-47 entered Scapa Flow to attack HMS Royal Oak in 1939 – Credits: wikipedia.org

In response to the infamous naval disaster occurred in Scapa Flow, then British Prime Minister Winston Churchill ordered sealing of ways that could make another similar break-in possible.

As a result, huge amounts of concrete blocks were placed between islands to make causeways.  These causeways linking South Ronaldsay to the Mainland are now called the Churchill Barriers.

With a total length of 2.4 km, the causeways now connect the Orkney Mainland to the island of South Ronaldsay and also the two smaller islands of Lamb Holm and Glimps Holm.

With the scuttling of 52 German ships and also few other ships in the past, Scapa Flow consists of a world-class shipwreck resource, making it one of the world’s largest maritime museums.

A lot of the scrap metal from the sunken ships in Scapa Flow was removed following the cleaning operation is known as the ‘great Salvage operation.’ But, despite that operation, a lot of wartime heritage still can be found in its bed.

Apart from the seven remaining wrecks of the German High Seas Fleet, Scapa Flow has the British battleships sank in its waters such as HMS Royal Oak and HMS Vanguard.

After taking their historical and cultural importance into consideration, the wrecks have been protected as scheduled monuments.

On the other hand, Scapa Flow Visitor Centre and Museum, located at Lyness on the island of Hoy, illustrates the significance of Scapa Flow, especially about its involvement in World War 1 and World War 2.

The museum that based in wartime naval buildings tells the story of Scapa Flow, using pictures, three-dimensional representation of the island and of the sunken ships, films, and an audio exhibition along with a collection of large military vehicles.

Opened in 1915, Lyness Royal Naval Cemetery located on Hoy Island, is the final burial place of many Royal army members who lost their lives during both world wars. The 600 soldiers laid to rest here include Empire and Commonwealth service personnel, mostly sailors. 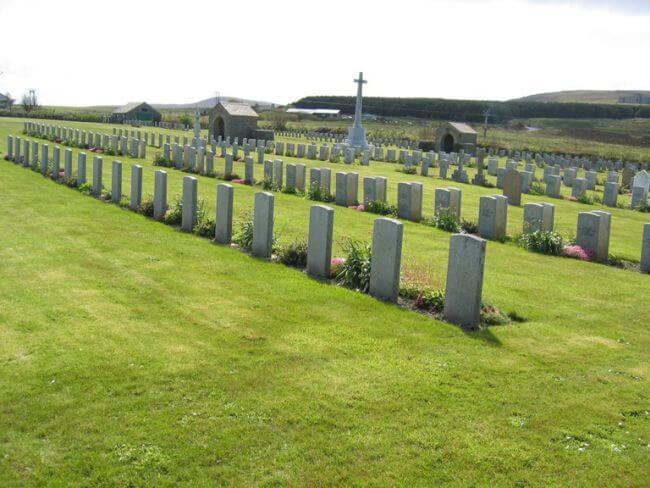 According to war documents, more than 440 Commonwealth servicemen buried here were from the First World War, of which 107 remain unidentified.

And around 200 soldiers buried during Second World War include 26 men from H.M.S. “Royal Oak”, which was sunk by a German U-boat.

In addition, there are also the graves of 13 sailors of the German High Seas Fleet. The Lyness Royal Naval Cemetery was closed in 1946, as the navy started shifting its operations from Orkney.

Currently, Scapa Flow is considered one of the most visited tourist sites in the world. Having a rich wreck resource underneath, Scapa Flow is home to a wide variety of wild aquatic lives, attracting visitors from across the world.

In addition, the body of water features a living account of the two World Wars and the natural beauty in many islands nearby.

The highlights include diving options to visit the bed of this harbour and explore the remains of battleships, Italian Chapel constructed by Italian prisoners, Stromness Museum and work of artists.

Since the wrecks have become rich artificial reefs, Scapa Flow now qualifies as one of the top diving destinations in the world, becoming a popular venue for recreational scuba divers.

Since ships lie at base weigh as much as 25000 tons, the divers have the opportunity to explore seafloor much. Remains of ships like the Cruiser, Dresden, Brummer, Koln, Konig, Kronprinz Wilhelm and Markgraf can be explored through these diving expeditions along with the rich marine fauna growing on them.

Currently, there are many dive boats operating in the Scapa Flow area, helping divers across the world to help explore the maritime history of the water body.

However, sometimes the wrecks of Scapa Flow also make changes to the weather conditions according to the seasons, creating discomfort for divers at times.

The temperature gets warm during the spring as well as in the in early autumn in Scapa Flow, triggering an algal bloom, which reduces visibility in the water.

Deciphering the Mystery of Vile Vortices
Want to share your tips and advice? Got questions? Visit the community forum to ask questions, get answers, meet people, and share your tips!