A recent grounding incident of a ship turned out to be fatal as the master declared “Abandon-Ship”. Though the decision to abandon the ship was, some say, dubious; it was nevertheless a-moment-of-panic and given the conditions the only chance to survive.

Subsequently, as the crew managed to get away from the wretched ship, the fate had its own plans; the lifeboat which was carrying the survivors capsized under steep breakers and heavy surfs, while they tried ‘beaching’ it. Except a few crew members who went missing in the bad weather conditions, others found themselves extremely lucky to be alive.

Beaching a life boat in good weather seems doable, although a bit tricky, but when it is to be done in a bad and inclement weather, it is a nightmare.

A boat can easily be toppled over its broad side when approaching dangerous breakers and surfs near the shore, if not handled skillfully and of course, with a lot of patience. That’s what exactly happened to the folks in the life boat who were trying to ‘beach’ it as they went crashing over the dodgy waves and the fateful happened.

To survive such a debacle, it’s important to be mentally strong and focused. It also depends upon the survivors’ ingenuity to deal with the hazards they face. In this case, the skills or rather the knowledge vital to handle the life boat while beaching were inapt. So to fill in the gaps, let’s discuss a few basic techniques among several advanced ones to safely beach a life boat once land is sighted.

Once the landing point is selected, take your time to adjust to the situation. Landing onto the leeward side of the main land or island, or on a point projecting out into water is more favoured than crashing in from the windward side. Avoid the glare of the sun as far as possible to circumvent from getting baffled when finding the correct landing spot. Choosing a sandy beach for landing is definitely advised. Never beach in the night time.

Avoid getting caught into the rip currents or tides as they might carry you further into danger or far away from it. Look for openings in the surf lines and head in for them. A good lookout is important for corals or rocks protruding out from the shallows.

Using the boat’s engine, close into a position that is comfortable for maneuvering, suitably a point where the swell breaks or a position from where the breakers rise.  Then turn the boat around to face the sea with the boat’s stern towards the shore. Now stream the sea anchor along with a tripping line attached to it. This will help in holding the bow into the sea and swell.  Now, after securing the rudder to any side use the boat oars to steer ashore. 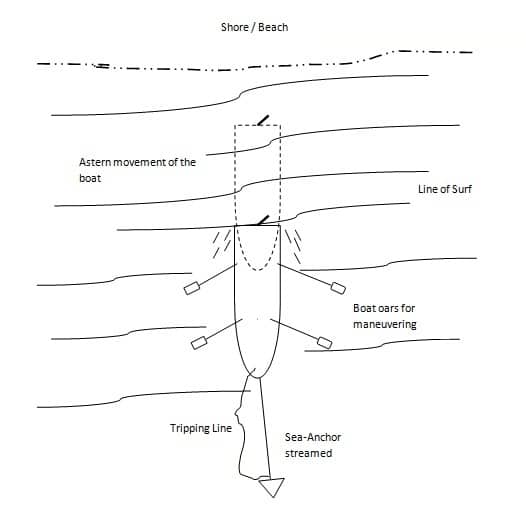 The moment breakers hit the bow of the boat, the person handling the sea anchor should then trip the line and at the same time the boat should be oared astern. The person at the bow should watch the next wave and release the tripping line to have the life boat stemming the sea; oars should be taken out of water. This will take the boat astern slowly and safely while keeping the bow offshore. Once the boat hits a shallow ground, some of the survivors should then get out of the boat and pull it all the way in.

Avoid getting toppled over

With breakers flowing rapidly it won’t be possible to out-run them and run aground simply by using the life boat’s engines. Heaving onto the sea when heading inshore might lead the boat to lose its steerage way causing the boat to get broadside to the sea / swell and keel over. If in case the boat capsizes, remember to swim clear of the boat as soon as possible.

Although the self-righting, fully enclosed lifeboats are much safer to be in than their older cousins, chances are they may just turn out to be worse on a bad day. Panic, mostly, they say is the culprit to a human catastrophe. So be prepared ‘as knowledge in most of the cases is always better than imagination’.