As with all modes of transport, the lighting systems used by the night are imperative to the vehicle’s safety. Ships, being enormous constructs, needs lighting systems too! In fact, the lighting system in place for a vessel is integral to the safe navigation of the vessel; in fact, it is one of THE MOST important aspects of nautical studies emphasised on in college as well as for competency exams.

The primary function of marine navigation lights is to aid prevention of any major accident from happening. All boats – whether big or small are required to have night lights as a part of the navigation systems. This system was introduced in the year 1838 by the United States and then was followed by the United Kingdom in 1849. In the year 1889, the International Maritime Conference was established by the United States to establish proper guidelines to prevent marine accidents. In the year 1897, these rules were officially adopted internationally. The colour of the lights that were required to be used as specified by a set of rules passed in the UK. On the basis of this rule, three colours were chosen: red, green and white. Even today, the marine navigation lighting consists of these three colours. 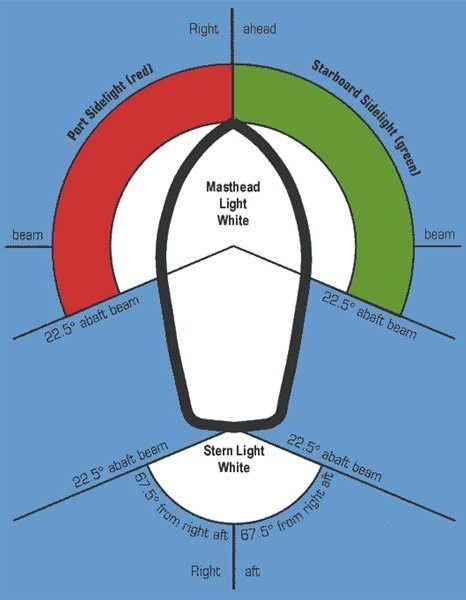 There is a pattern in which these lights are set up on the ships and boats in conjunction with the International Association of Lighthouse Authorities (IALA) Buoyage Systems. The pattern can be explained below:

Both the sidelights show an unbroken light over an arc of the horizon of 112.5 degrees such that from right ahead it can be viewed to 22.5 degrees shaft on either side.

Lights aren’t just to indicate one’s own status as a vessel for identification by other vessels in the vicinity but also vice versa. It is probably the most important aspect when complying with COLREGS in order to ascertain the status of any vessel in order to take the appropriate action as per COLREGS. PART C of the COLREGS published by the IMO is titled as LIGHTS AND SHAPES and lays out all necessary information with regard to lights and the specificity of their usage for different types of vessels. For example, a fishing vessel is mandated to display a RED light over a GREEN light and the opposite is applicable for a pilot vessel. ANNEX 1 of the COLREGS deals with the positioning and technical details of lights and shapes and has precise data with regard to many aspects of marine navigation lights whereas ANNEX 2 deals with the additional signals for fishing vessel fishing in close proximity. The parts mentioned till now are actually extremely important for any navigating officer to be thorough with, not only for proving their competency in the exams but also for practical application onboard.

The visibility range of such lights varies between three miles to six miles. The lights that are used for ships and bigger boats have a longer range of visibility as compared to the smaller boats.

Following table indicates the visibility of lights as per the COLREGS Rule 22. All ranges in nautical miles and lengths in metres.

The importance of lights have been stressed upon enough, but to understand its practical application, imagine a head-on situation (two vessels on reciprocal course); as per COLREGS Rule 14, upon viewing the mandated lights for the situation, each vessel is instructed to alter their course to starboard so as to pass on each other’s port sides. For the purposes of the application of light signals, it is also be important to understand the concept of ‘Aspect’ which, in easy terms, is our own light as viewed by another vessel.

The subject of lights is a rather precise one and being thorough with it requires targeted study. Needless to say, safe navigation is entirely entwined with the knowledge and appropriate application of marine navigation lights.