Apart from their small size, all electrical and electronic equipment or circuit on boards on ship play a vital role in operation of ship’s system and machinery. Different equipment onboard vessel utilizes alternating current, direct current or both depending upon the nature of operation. Some of the Very important circuits and setups are run through D.C current.

Since most of the ship generates A.C current from its alternator, it becomes essential to use a device, along with transformer, which can convert this A.C current into D.C current for the use of those equipment or circuit running on D.C.

Rectifier is a circuit which utilizes one or more semiconductor diode to convert an alternating current into a pulsating direct current.

This process of conversion is known as rectification. 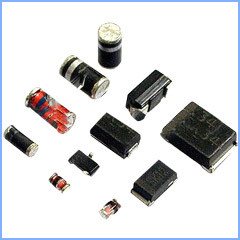 Half wave rectifier consists of a single diode connected in series with load resistor.

During the positive half cycle of input voltage, the diode is forward biased and it conducts for all volts which is greater than its barrier potential.

During negative half of the cycle, the diode is reverse biased hence it does not conduct.

There are two types of single full wave rectifier:

1)      Two diodes connected back to back using a centre tapped transformer.

A single phase bridge rectifier is used with four diodes connected in bridge with a non centre tapped transformer. Full wave rectifier has an advantage of converting both polarities of input A.C waveform in to D.C, hence it is more efficient.

A three phase rectifier circuit consist of six diodes which are in pair of three, connected in series (anode to cathode). It is commonly used in three phase circuits.

Some of the uses of rectifiers on board ship are;