In today’s maritime industry, the term “Energy Efficiency” is of sheer importance in all aspects of a shipping operation. From the main engine to cargo operations, energy efficiency has become the base to set up and plan any machinery or procedure.

The electrical system being the most “omnipresent” network onboard ships, it is important for ship owners and operators to make their energy efficiency plans considering the same.

Following are some important features, which can be integrated into a conventional ship system for achieving better energy efficiency out of electrical machinery.

1. LED lighting: Use of energy-efficient LED lighting in place of conventional lamps and tube lights on ship, contributes to more savings and add up to its energy efficiency model. An incandescent globe (bulb) can provide a life span of 1000 hrs and a fluorescent lamp can be used up to 7500 hrs. However, far better performance can be achieved by LED lights which have a lifespan of about 50,000 hours and 60% less energy consumption. Implementing this would not only reduce the maintenance hours but also bring down the operating costs in thousands every year, which includes the generator fuel cost and operation/maintenance cost of the lights.

2. Energy Efficient Motors: Using an energy-efficient motor not only overcomes the losses experienced by conventional motors (iron loss, stator and rotor I2R loss, frictional loss etc.) but also helps in saving power and improving efficiency, as it requires lower maintenance while still having longer running hours. These motors provide better performance even at low temperature and the starting torque required is lesser than the conventional type of motors.

3. Electronic Soft Starters: Soft starters are used to help in smooth, step-less acceleration and deceleration of motors – which helps in reducing damages to motor winding and bearings, leading to increase in the motor life. An electronic soft start has the advantage of providing an improved power factor in hand while lowering mechanical stresses and maintenance. 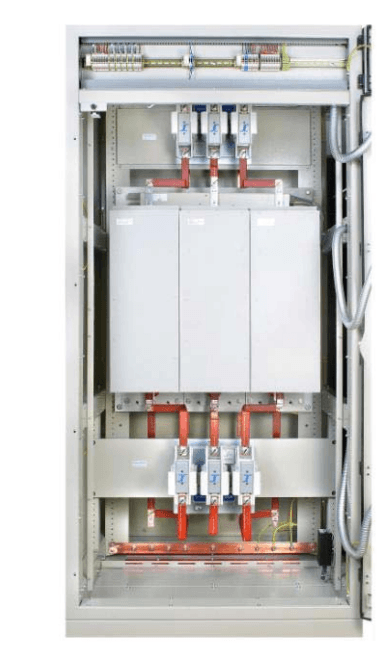 4. Slip Power Recovery System: A ship comprises of slip ring motor, which is installed at various types of systems (for e.g. slip-ring brake motor which drives an anchor chain on a ship). Installation of slip power recovery system helps in better speed control of slip ring motors, which vary the rotor voltage and control the speed, by collecting the excess power from the slip and transferring it to motor shaft as mechanical or electrical power.  However, since they have a drawback of supplying poor power factor, they are mainly used for high power rating systems and where the motor speed range is 1:5 or less.

6. Electronic Ballast: Most of the ships are still using fluorescent lamps as their lighting source. To improve the efficiency of these lamps, electronic ballast which works on the principle of electrical gas-discharge is used to control the starting voltage and operating current of the lighting device. This helps to eliminate the flickering and buzzing of fluorescent lamps. The electronic ballast circuit operates the lamp at the frequency of 40-50 Khz instead of 60Hz, which not only increase the service life but also reduces the power consumption to 40%.

7. Variable Speed Drive: Also known as adjustable speed drive, it is used along with electrical motors powered by AC or DC,  to control the speed as per requirements. Variable speed drive can also be used in conduction with a complete mechanical method of speed control. VSD has the advantage of reducing the lifecycle cost due to reduced maintenance and manning. It requires minimum automation and hardware to operate which makes it a low-cost installation system.

8. Variable Frequency drive: Also known as adjustable frequency drive, VFD is normally used in electro-mechanical drives that utilize an electric motor to control the speed and torque by adjusting the voltage and input frequency. Variable Frequency Drives (VFD) can reduce the power consumption by as much as 60% when used for fan and centrifugal pumps. It also reduces the risk of cavitation in the pump. To get the maximum efficiency from the VFD, it is adjusted as per the load demand of the system.  Large capacity pumps and fans, which are needed to run continuously at 100% load, will not be benefited from VFD in respect of energy efficiency. VFD is different from VSD as it may only utilize for AC motors. Hence, a VSD can be a VFD but not always vice versa.

In Hybrid turbocharger, exhaust gas energy is recovered to turn a compressor, which supplies scavenge air to the main engine and also generates electricity through an alternator attachment incorporated in the turbocharger known as MET hybrid turbocharger

The turbine and compressor do the heat energy recovery work and the alternator is used to generate electrical power without consuming any extra fuel as it is driven by the shaft power of the turbocharger.

Hybrid turbocharger helps in generating enough power from main engine operation and also saves fuel as the heat recovery system is used for driving the alternator.

These are some points that can be integrated into the conventional electrical system to achieve maximum energy efficiency onboard ship. Also, correct operating procedures of all electrical machinery systems and planned maintenance is also necessary for achieving the desired overall energy efficiency of all ship’s systems.

Do you know any important point that can be added to this list?