Air supply is provided by opening the main air bottle valve. As the valve is opened, the air is passed through the pilot valve and acts on top of the automatic start valve, providing a positive closing. The other branch supplies air until the turning gear interlock as the interlock blocks the air to go further. 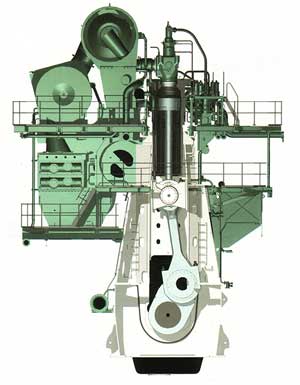 To start the main engine, first turning gear has to be disengaged. This will deactivate the interlock and the air will be supplied to the automatic start air valve.

Since there is a spring pressure and additional positive closing by the air supplied pilot valve, the air will not go further automatic start valve until the start command is given.

When the air start lever is operated in the ECR, the pilot valve shifts and blocks the air on top of automatic valve. It vents the line and there is no more positive closing.

Air passed from turning gear interlock pushes the spring, opens the valve and closes the vent.

Now the air is available in the cylinder head starting air valve manifold and in the distributor. The distributor consists of a negative type cam for positive overlap.

When the concerned unit number 4 distributor valve comes in the cam profile, air compresses the spring and the valve is opened to operate the same unit number 4 cylinder head starting air valve.

As the camshaft rotates, unit number 4 line is vented and the cylinder head starting air valve closes. Now unit number 1 valve will be in contact with the cam profile and the air is injected in this unit.

The air injection is done as per the firing order of the engine.