Today the maritime industry is on the verge of a major change, from conventional methods of propulsion to modern and more economical and environment friendly methods.

In order to reduce fuel consumption in ships such as gas carriers, MAN B&W’s duel fuel or bi fuel ME- GI engines works both on conventional marine fuels and also on gas fuels.

Gas carrier cargo tanks are specially built, designed, and insulated to carry the liquefied cargo at a temperature as low as -161 °C. However, 0.1 to 0.17% of the total cargo boil off per day which is a natural phenomenon. This means if a ship is carrying total cargo of 20000 m3 in a voyage of 10 days, then the cargo that will boil off will be approximately 300000 liters.

This waste gas is used in the main propulsion engines of the ship, which reduces the overall fuel consumption of the ship, saving huge amount of money. 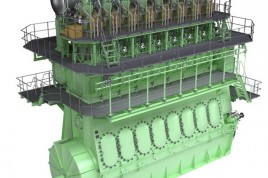 The conventional fuel injection system is similar to that found in other MAN – 2 stroke engine.

The gas supplied is through double walled, jacketed pipe made of suitable material like stainless steel to withstand the low temperature if there is a gas leak.

The FIVA valve controls the fuel oil quantity when the engine is used on both the fuels.

The Duel fuel engines are always started in conventional diesel fuel oil. The ME GI engine can be operated in three basic modes-

2)      Fuel and Gas mode-Both oil and gas fuel is used in the cylinder liner with oil fuel about 6 to 8 % depending upon the load of the engine.

3)      Only fuel mode- When maneuvering or when no gas fuel is available, the engine is run on conventional fuel system.

Safety Incorporated in the System:

You may also like to read-Understanding Nuclear Marine Propulsion