Oil tankers carry oil of different grades and quality, having the property to produce flammable vapours and gases when loaded for transportation.

Even with no cargo on board, there can be harmful flammable gases present in the hold.

When the vapour produced by an oil cargo is mixed with a certain concentration of air primarily containing oxygen, it can result in an explosion which results in damages to the property, marine pollution and loss of life

For safety against such explosions, an Inert gas system is used onboard. It can be through as a separate inert gas plant or flue gas produced by a ship’s boiler.

Inert gas system is the most important integrated system for oil tankers for safe operation of the ship. 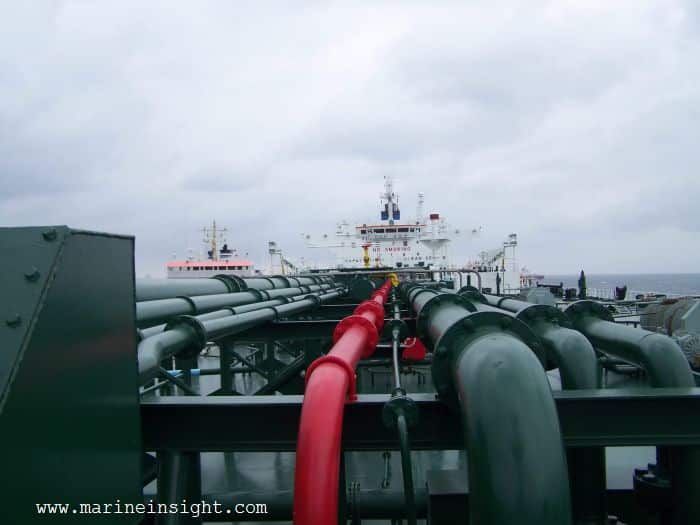 Inert gas is the gas that contains insufficient oxygen (normally less than 8 %) to suppress the combustion of flammable hydrocarbon gases.

Components and description of IG system:

The following components are used in a typical inert gas system in oil tankers:

1.  Exhaust gases source: inert gas source is taken from exhaust uptakes of boiler or main engine as contains flue gases in it.

2.  Inert gas isolating valve: It serves as the supply valve from uptake to the rest of the system isolating both the systems when not in use.

3.  Scrubbing tower: Flue gas enters the scrub tower from the bottom and passes through a series of water spray and baffle plates to cool, clean and moist the gases. The SO2 level decreases up to 90% and gas becomes clear of soot.

4.  Demister: Normally made of polypropylene, it is used to absorb moisture and water from the treated flue gas.

5.  Gas Blower: Normally two types of fan blowers are used, a steam-driven turbine blower for I.G operation and an electrically driven blower for topping up purposes.

6. I.G pressure regulating valve: The pressure within the tanks varies with the property of the oil and atmospheric condition. To control this variation and to avoid overheating of the blower fan, a pressure regulator valve is attached after blower discharge which re-circulates the excess gas back to the scrubbing tower. 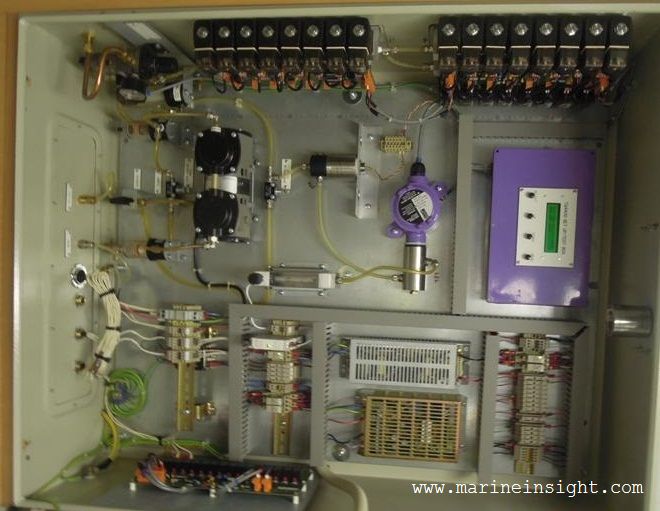 7.  Deck seal: The purpose of the deck seal is to stop the gases to return back which are coming from the blower to cargo tanks. Normally wet type deck seals are used. A demister is fitted to absorb the moisture carried away by the gases.

9. Deck isolating valve: The engine room system can be isolated fully with the deck system with the help of this valve.

10.  Pressure Vacuum (PV) breaker: The PV breaker helps in controlling the over or under pressurization of cargo tanks. The PV breaker vent is fitted with a flame trap to avoid the fire igniting when loading or discharging operation is going on when in port.

11. Cargo tank isolating valves: A vessel has number of cargo holds and each hold is provided with an isolating valve. The valve controls the flow of inert gas to hold and is operated only by a responsible officer in the vessel.

12. Mast riser: Mast riser is used to maintain a positive pressure of inert gas at the time of loading of cargo and during the loading time it is kept open to avoid pressurization of the cargo tank.

13. Safety and alarm system: The Inert gas plant is provided with various safety features to safeguard the tank and its own machinery.

Following are various alarms (with Shutdown) incorporated in the Inert Gas plant on board the ship:

Following are various alarms incorporated in the Inert Gas plant:

The basis of inert gas production in the IG plant is the flue gas generated from the ship’s boiler. The high-temperature gas mixture from the boiler uptake is treated in an inert gas plant which cleans, cools and supplies the inert gas to the individual tanks via PV valves and breakers to ensure the safety of the tank structure and atmosphere.

The system can be divided into two basic groups:

a) A production plant to produce inert gas and deliver it under pressure, by means of blower(s), to the cargo tanks.

b) A distribution system to control the passage of inert gas into the appropriate cargo tanks at the required time.